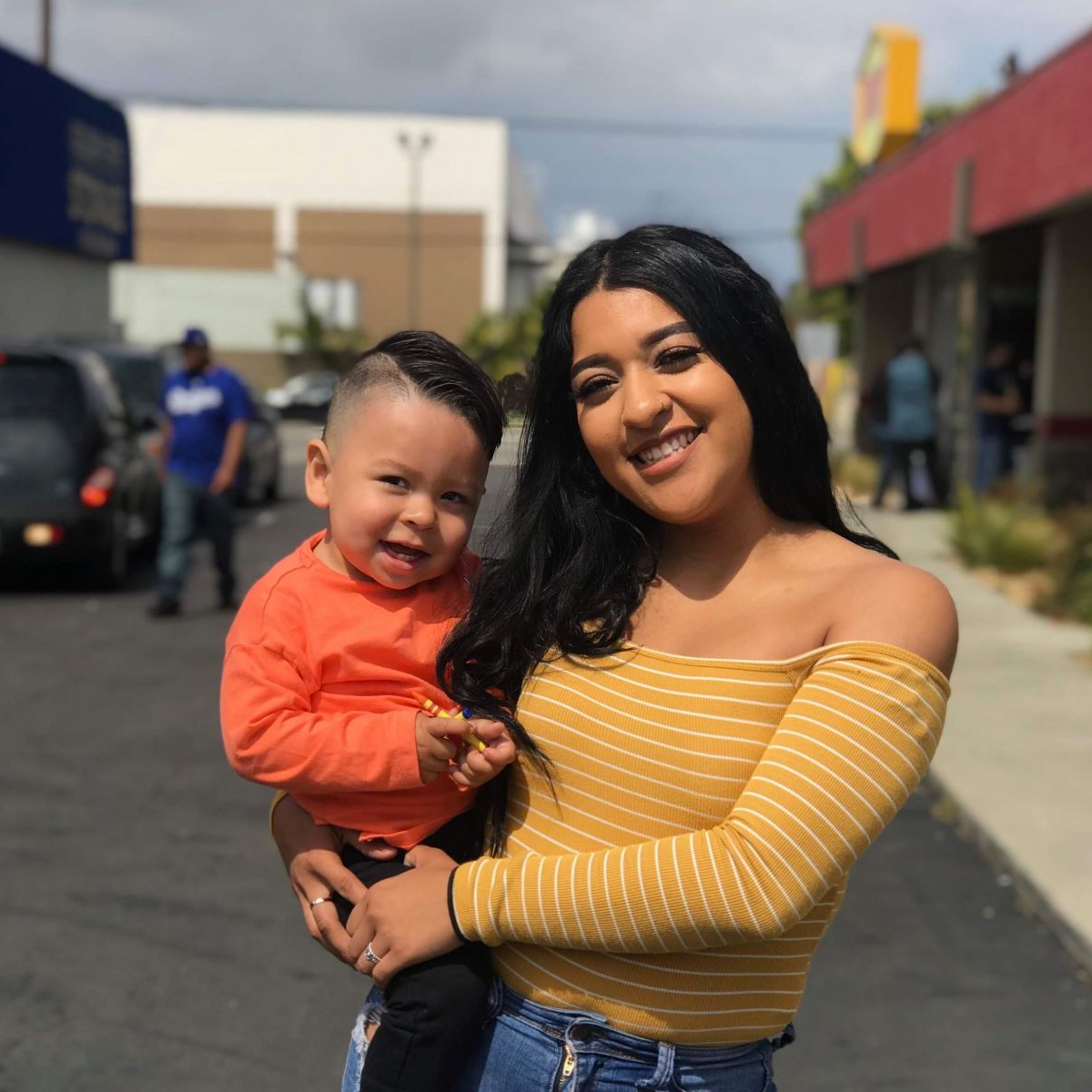 When Evelin Balbuena-Galvez was six weeks pregnant as a sophomore in Leuzinger High School in Lawndale, she slipped and fell in the shower, missing a day of school. On other days, morning sickness and doctor’s appointments kept her from attending classes. Then, when she was seven months pregnant, she fell down a stairway at school. Concerned for her daughter’s safety, Evelin’s mother kept her home from school for a week. Not long after, the school district tried to fine Evelin’s mom up to $500 because Evelin had too many unexcused absences.

Things got even worse for Balbuena-Galvez after her baby boy, Antonio, was born that winter.

“I had maternity leave for two months, but they gave me an overwhelming packet of homework for each period I had and that didn’t give me time to bond with my baby. I wanted to give him affection and skin-to-skin contact from breastfeeding, but I wasn’t able to breastfeed him because of all the time I was spending on these packets,” she said. “They would pressure me from the school office and call me up every day and ask me if the packets were done.”

She found even more frustration back at school after her maternity leave ended: “I couldn’t even pump milk for my baby at school because they don’t give you a private place to do it.”

Instead of bearing her burden silently, Balbuena-Galvez joined four other young mothers on a journey in advocacy that led to Sacramento earlier this month to ask lawmakers to support Assembly Bill 2289, the Young Parents’ Right to Education.

Authored by Assemblymember Shirley Weber (D-San Diego), the bill would allow pregnant or parenting pupils to receive between six to eight weeks of parental leave — and a parenting pupil not giving birth to receive four weeks of parental leave — in order for them to care for and bond with an infant within the year after birth. During this leave, a pregnant or parenting pupil would not be required to complete academic work or other school requirements. Upon returning to school, the pupil would be entitled to make up work missed and remain enrolled in their school for a fifth year, if needed, in order to graduate.

The voyage into advocacy began with a Building Stronger Families (BSF) grant by First 5 LA to El Nido Family Services as part of their work with the Best Start Compton-East Compton Community Partnership. According to BSF Compton Program Manager Saul Figueroa of El Nido, several young parents in the partnership were trained to select and advocate for systems change on an issue affecting young parents in the community.

Bolstered by their personal experiences and research, the young parents chose the issue of teens not graduating from high school because they got pregnant or gave birth, often due to attendance issues. Among the statistics:

“As we started researching why teen parents were not graduating, we realized a lot of them were getting these homework packets that were overwhelming,” Figueroa said. “And once you leave school and try to go back, it’s a lot harder to go back. You’re asked to choose between your baby and your education.”

When they heard about AB 2289, Figueroa said, “They were like, ‘Wow. That’s what we’ve been talking about here.’”

“These parent advocates and their stories are crucial to the success of the bill.”– Assemblymember Shirley Weber

To these young moms, supporting AB 2289 wasn’t about helping themselves. They had already given birth while attending school. It was about helping others. 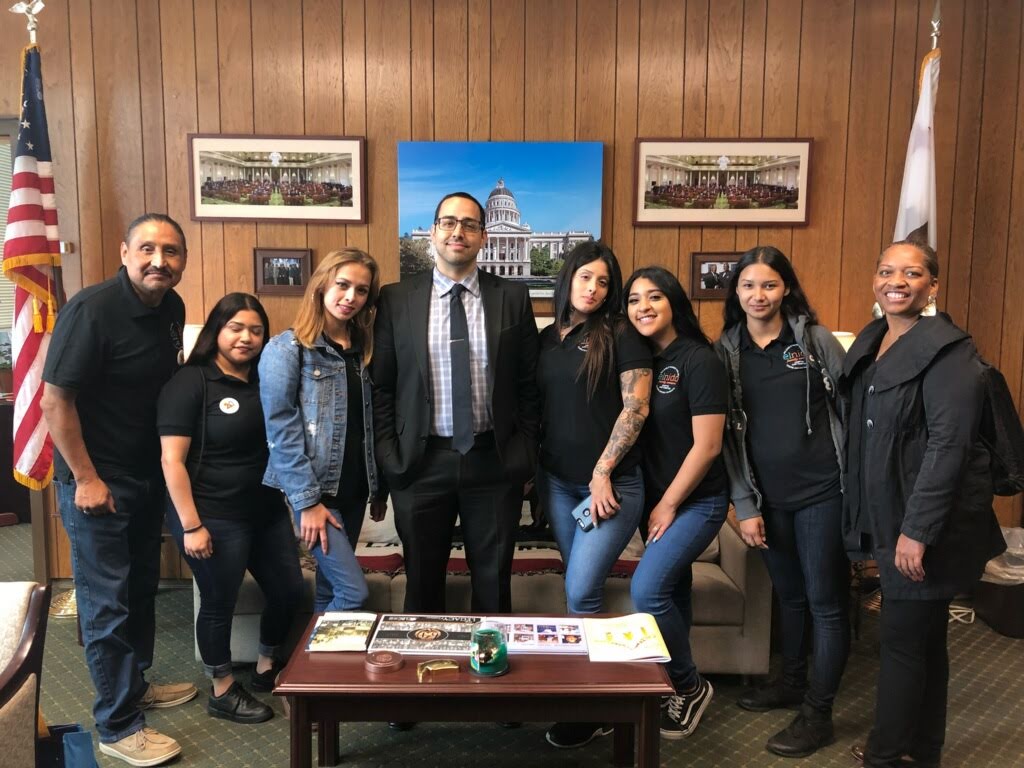 With six months of advocacy training under their belt from Dawn C. Franks, executive director of Stewards for Healthy Communities and Families, Balbuena-Galvez joined Figueroa on the trip to Sacramento with four other young mothers: Ashley Gijalva, Jennifer Rodriguez, Leti Calleros and Josephine Gonzalez.

“This bill would really help other teen parents, stressing about school, the absences, the work,” Balbuena-Galvez said.

“It was important to me (to advocate for AB 2289) because if my daughter goes through the same thing I did, she won’t have to suffer like I did and still do,” Gonzalez said.

In each meeting, the quintet of mothers shared their own stories of high school pregnancy and how AB 2289 would have made a positive impact on their lives. The stories were powerful, drawing tears among the young women and even one legislative staffer.

“One staff member said her mom was a teen parent,” Franks recalled. “She was able to connect to what was being said and could recall her mother talking about her struggles as a single teen parent.”

“For legislator staff members unfamiliar with AB 2289, talking with the young parents put a face on the bill,” Figueroa said. “It made a difference.”

“For legislator staff members unfamiliar with AB 2289, talking with the young parents put a face on the bill.” -Saul Figueroa

“They were all pretty positive about the bill,” Franks added.

While time will tell whether the Assemblymembers will vote for the bill, the trip to Sacramento was clearly time well spent.

“These young women were impressive; they came in poised and determined,” Assemblymember Weber said. “We hear a lot from polished lobbyists in Sacramento, but there is something especially moving when you hear from young people advocating for themselves, telling their own real-life stories in the hope that what they have gone through will have a positive impact on other people. These parent advocates and their stories are crucial to the success of the bill.”

The young mothers also left an impression on First 5 LA. This includes those who have worked with Best Start in the Communities department to the policy leaders and Commissioners who were in Sacramento on the same day as part of the First 5 Association’s Advocacy Day (see related story here). 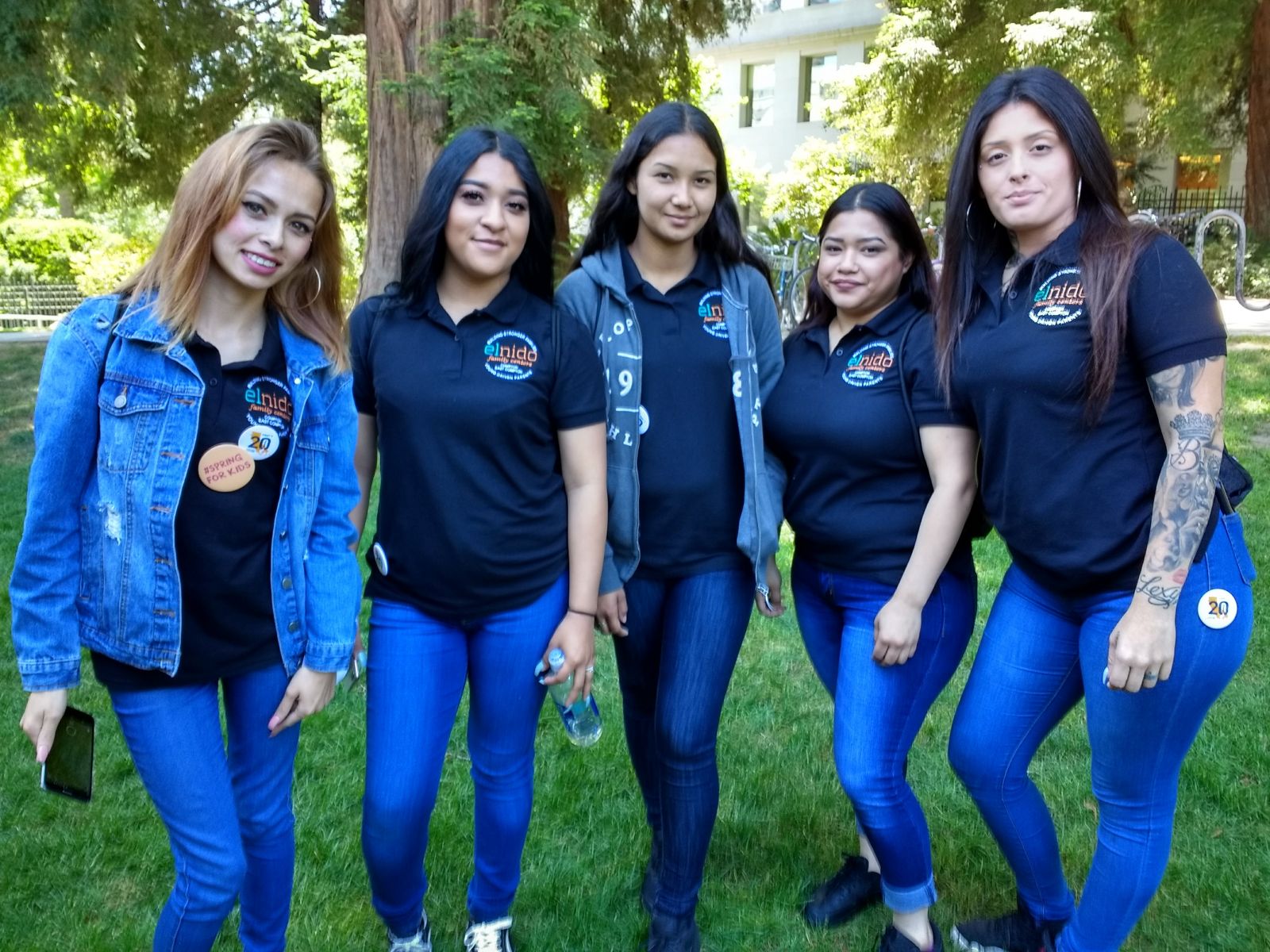 “I was so proud to see the parent leaders in Sacramento using their voice to influence California’s laws,” said Peter Barth, First 5 LA’s Director of Public Policy and Government Affairs. “Never underestimate the power of exercising your right to influence the decisions made by our elected leaders. We encourage all of L.A. County’s residents to speak truth to power, and to speak up for children and their families.”

“This is part of what Best Start partnerships wanted to do: to change the trajectory of what is going on in the community and make it better,” said First 5 LA Commissioner Romalis Taylor, a former Best Start Compton-East Compton partnership leader.

“Ultimately, this is what Best Start is about: empowering parents and communities to advocate for themselves, other parents and, most importantly, the infants and young children of Los Angeles County,” said Joaquín Calderón, senior program officer with First 5 LA’s Communities Department.

“This experience taught me not to be scared, to stand up for yourself and for what you believe in and for other people who may be going through what you went through. ” -Evelin Balbuena-Galvez

Without First 5 LA’s funding for the BSF program in Best Start Compton-East Compton — which included the advocacy training and the trip to Sacramento — the young mothers would never have traveled to the state capitol.

“I don’t know how they would have been able to have that experience without First 5 LA,” Figueroa said. “It made a difference. What the young ladies learned from this trip and their training they will use to be lifelong advocates for children 0 to 5 and other parents in general.”

“When this bill hopefully gets passed, I can be proud and tell my son that I helped other teens be successful in school and graduate without even knowing them, said Balbuena-Galvez, who hopes for more opportunities to advocate for teen moms in the future. “This experience taught me not to be scared, to stand up for yourself and for what you believe in and for other people who may be going through what you went through. ”