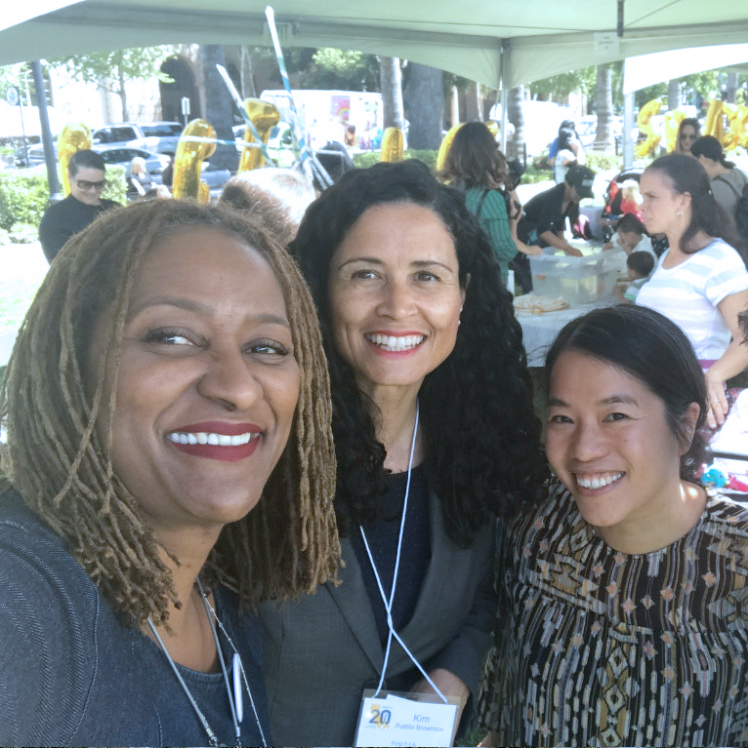 On a recent flight from Los Angeles to Sacramento, First 5 LA Commissioner Yvette Martinez spoke with a fourth grade teacher about the lack of early developmental screenings for young children, which includes diagnosing autism. With less than 30 percent of young children in the state receiving timely developmental screenings, this can impact children’s academic success and education system costs.

“The teacher said, ‘I see this all the time,’” Martinez recalled. “It’s hard to talk to parents about it. They should be talking to doctors and nurses early on.’”

Only four legislators are not being visited by a First 5 executive director today. -Moira Kenney

Martinez shared her story of the teacher during a visit with newly-elected Assemblywoman Sydney Kamlager-Dove (D-Los Angeles) in her Sacramento office. Joined by delegates of First 5 LA’s leadership and advocacy team, Martinez asked Kamlager-Dove to support Assembly Bill 11 (McCarty), which would ensure that kids enrolled in Medi-Cal are screened three times before age 3 using a validated screening tool, as recommended by the American Academy of Pediatrics. 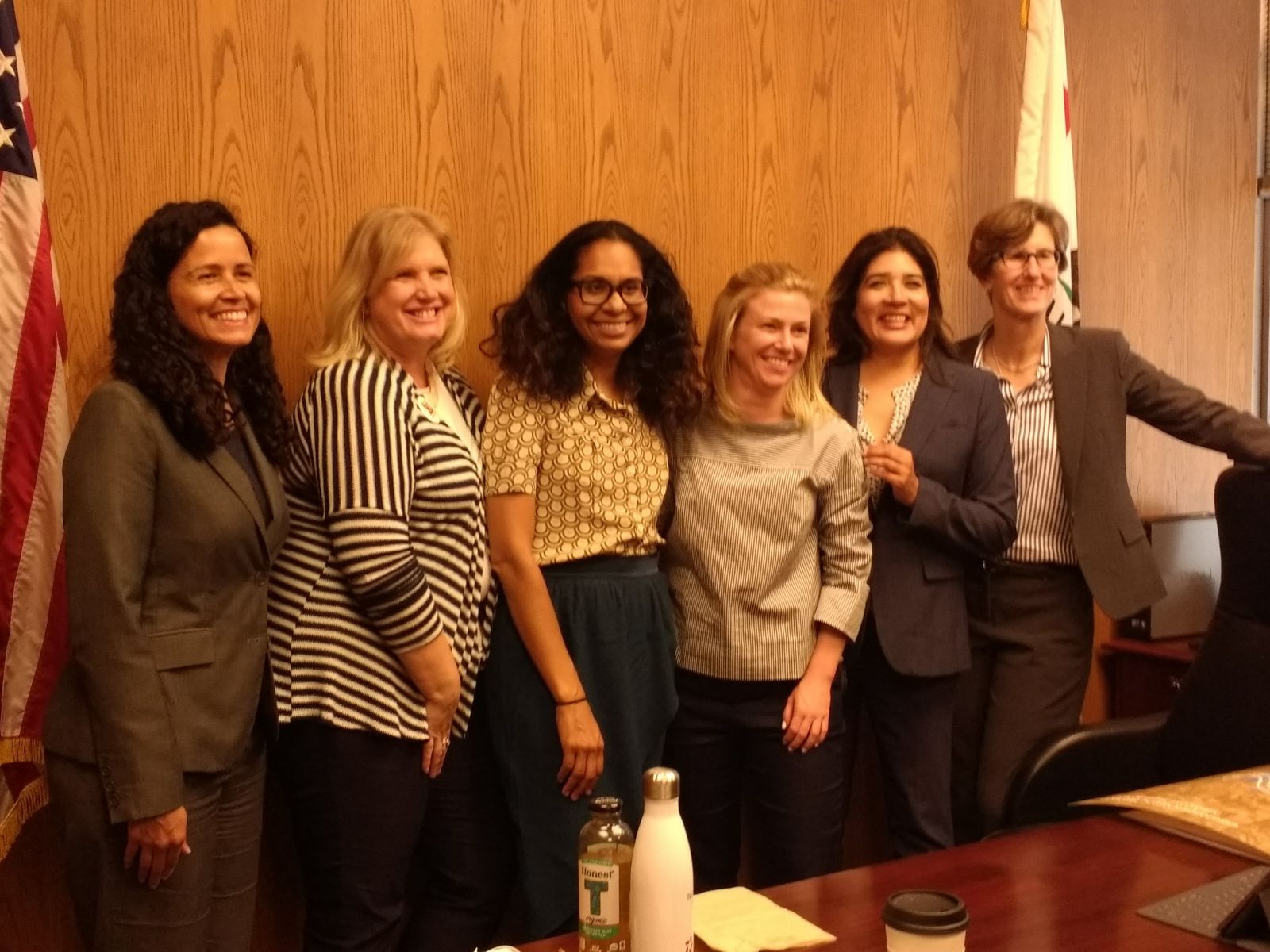 The topic resonated with the Assemblywoman, who asked: “I thought developmental screening was something that has already been addressed?”

First 5 LA Executive Director Kim Belshé pointed out that, in one survey, some pediatricians believed they were doing appropriate developmental screenings, but actually were not: “The doctors were doing an eyeball test.”

“This is why we need a validated tool for doctors,” Belshé replied. She noted First 5 LA’s support for Help Me Grow-LA, a countywide effort that builds on existing resources to ensure that communities identify vulnerable children with developmental or behavioral challenges and link families to community-based programs and services.

“Well, count me in,” said Kamlager-Dove. She later agreed on becoming a co-author of AB 11.

As one of 26 visits in a single day in Sacramento with state lawmakers by First 5 LA’s leadership and policy team, the exchange with Kamlager-Dove illustrated the impact of the growing advocacy efforts of First 5 LA — and all First 5’s statewide — among decision makers as part of First 5 Association of California’s Advocacy Day on May 2. 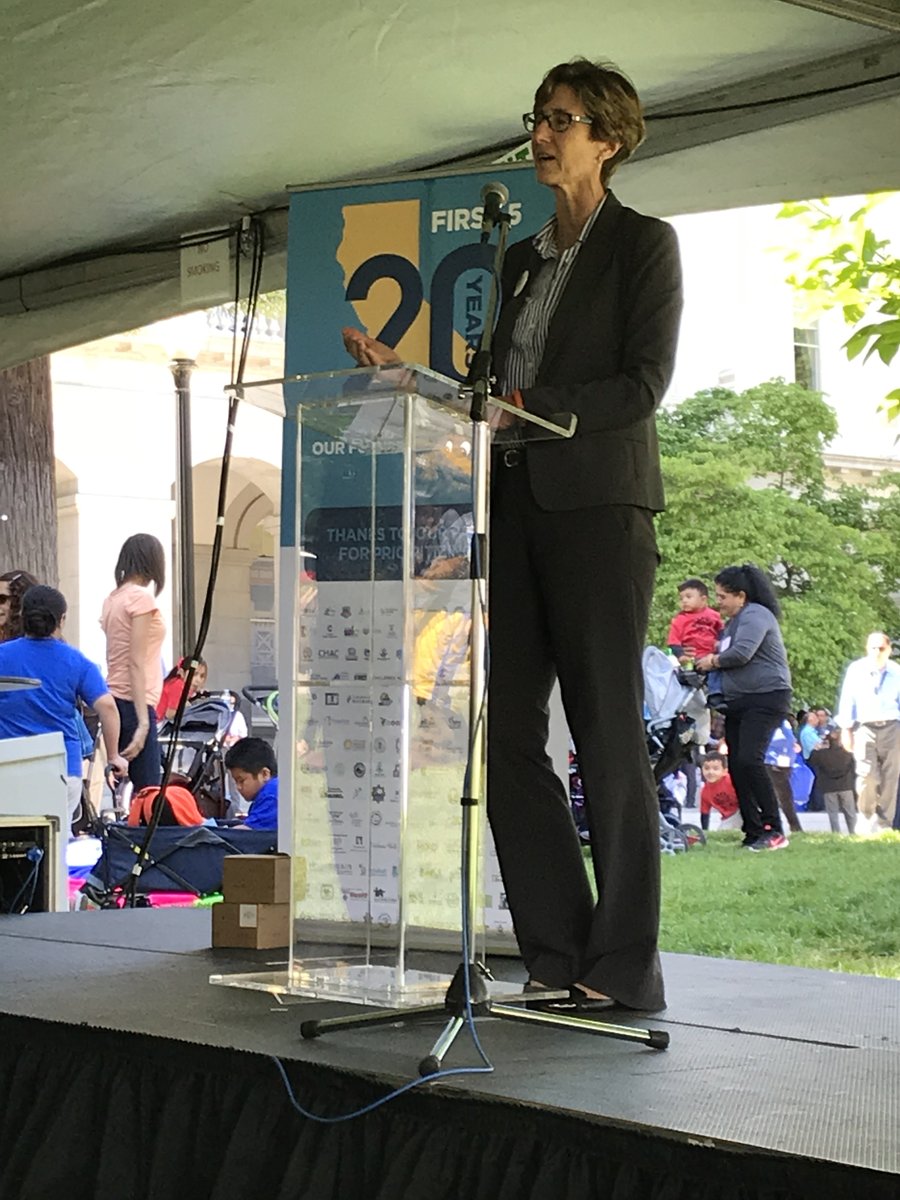 Altogether, more than 160 representatives from First 5 county commissions throughout the state met with 97 percent of state lawmakers.

“Only four legislators are not being visited by a First 5 executive director today,” said First 5 Association of California Executive Director Moira Kenney. “That is huge. And none of us are asking for funds to save First 5. They’re asking to build a system for kids and families in California. So going in there proactively, not defensively, on our 20th anniversary, is the most extraordinary shift in our thinking.”

After 20 years, we know a lot. People should listen to us. -Karen Scott

First 5 San Bernardino Executive Director Karen Scott added that gathering First 5 representatives statewide in Sacramento for Advocacy Day “strengthens our purpose with one voice. And after 20 years, we know a lot. People should listen to us.”

The day was punctuated by children’s activities, awards and speeches by lawmakers beneath several tents posted on the north lawn of the capitol in celebration of the 20th anniversary of Proposition 10’s passage, which created First 5 Commissions in each county of the state. Hundreds of parents and children joined the festivities, which featured former teacher turned Assemblywoman Blanca Rubio (D-Baldwin Park) reading a children’s book and a magic show by State Senator Jerry Hill (D-San Mateo). 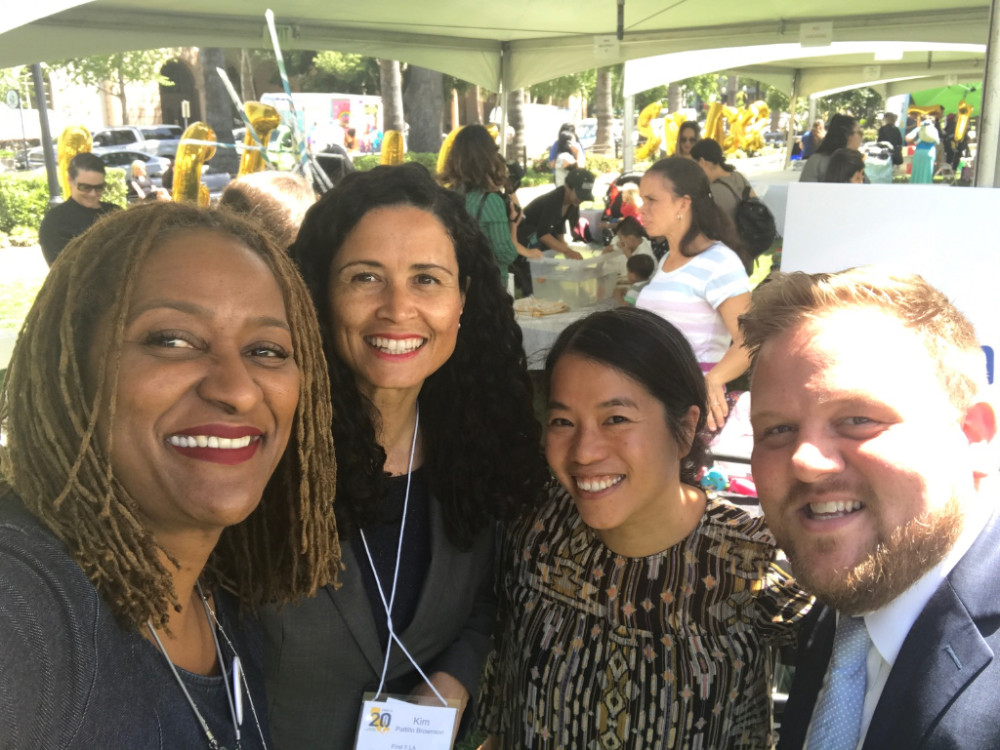 But the real magic took place in meetings with legislators.

“I can tell you right off the bat that our priorities are in line,” Assemblymember Wendy Carrillo (D-Los Angeles) told First 5 LA’s team at the beginning of their visit.

Not only is Carrillo a supporter of developmental screening (having co-authored AB 11), she was receptive to the other legislative priorities presented by First 5 LA’s team during their Sacramento trip: a billion dollars to support early learning for infants and toddlers; funding for expanded home visiting; and increased access to and reimbursements for quality early care and education. (Read more details in First 5 LA’s 2018 Legislative Agenda).

In citing the benefits of voluntary home visiting — which First 5 LA funds in multiple hospitals in the county through its Welcome Baby and Select Home Visiting investments — Taylor noted how the program improves parenting skills, reduces child abuse, and connects new or expecting parents to needed resources. 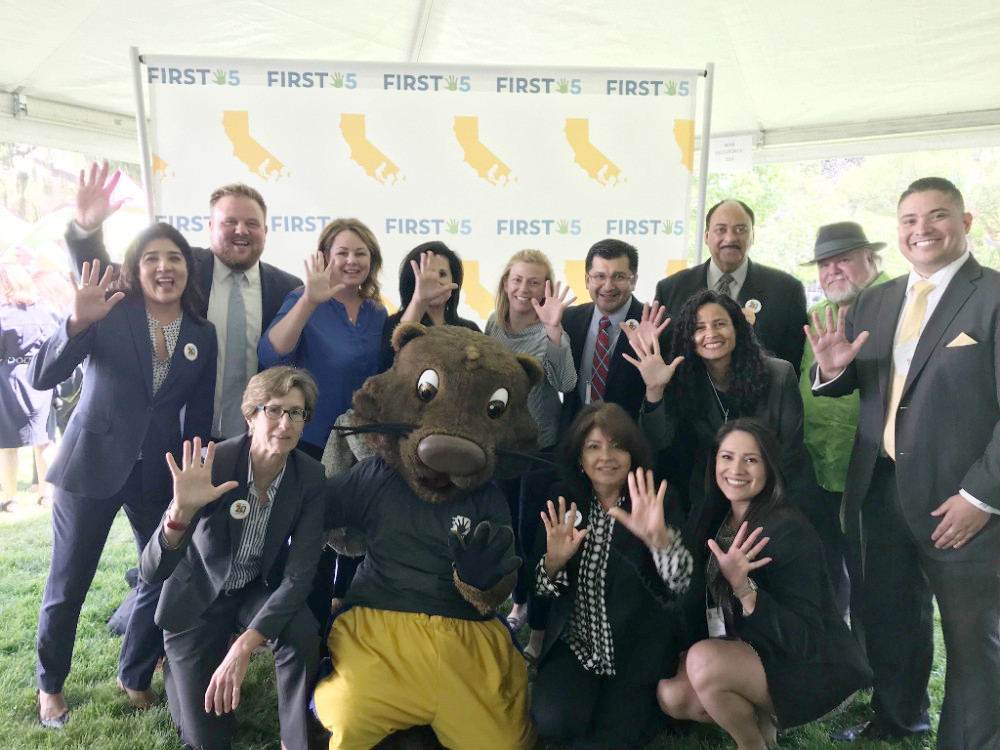 When Belshé pointed out that White Memorial Hospital is a participant in Welcome Baby, Carrillo responded enthusiastically: “That’s my family’s hospital!”

After hearing about Governor Brown’s plan to create a home visiting pilot in his 2018–19 budget proposal, as well as details of AB 992 that would bolster home visiting for CalWORKs families with small children authored by Assemblymember Joaquin Arambula (D-Fresno), Carrillo said she would speak to Arambula’s office about the bill. She also expressed interest in learning more about the First 5 LA-funded Best Start Community Partnerships and requested to schedule a meeting with partnership members in her district.

Home visiting stabilizes families and gives them an opportunity for success. -RomalisTaylor

“I don’t think anything happens without a reason,” Carrillo said of the meeting with First 5 LA.

Carrillo and Kamlager-Dove were not the only state lawmakers ready to voice their support for early childhood issues in Sacramento. Recognized for serving as a former commissioner of First 5 Sonoma County, State Senator Mike McGuire (D-Healdsburg) gave a rousing keynote speech to nearly 100 First 5 representatives gathered on the state capitol’s north lawn. 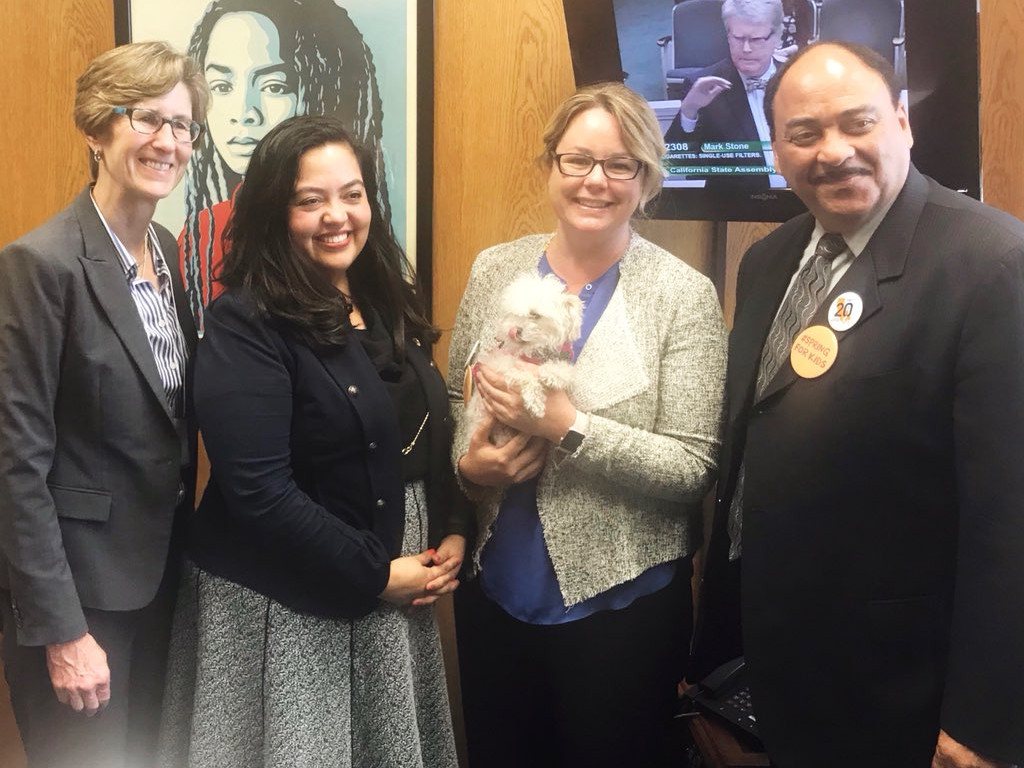 “First 5 is helping to fund early childhood programs throughout California for health and education,” McCarty said during the lunchtime festivities on the north lawn. “Without these programs, kids would have a hard time being able to succeed.”

McCarty was among three lawmakers to be honored on the north lawn with Champions for Children awards for their work advancing early childhood issues, including Assemblymembers Arambula and Cecilia Aguiar-Curry (D-Winters), whose AB 2292 legislation would increase the pay and recruitment of child care providers.

“I was a single mom and I had to figure out where my child would go to child care,” Aguiar-Curry recalled. “Now I’m a grandmother and I see my own daughter struggle with this for my granddaughter. With First 5 as a partner on this bill, together we will build a system that will outlast every one of us. Let’s make sure our babies get all they deserve.”

In his remarks, Rendon pointed out the impact of First 5 over the last two decades.

First 5 is helping to fund early childhood programs throughout California for health and education. –Kevin McCarty

“When you think about all the things that have happened in the last 20 years,” Rendon said, “there’s almost nothing that has had a bigger impact than First 5. First 5 is a big reason the public and policymakers have come to understand the importance of the first 5 years.”

A founding member of the State First 5 Commission in 1999 following the passage of Prop 10, Belshé expressed similar sentiments about the 20th anniversary of First 5 in the video below.

Parents, too, expressed their gratitude for First 5 at Advocacy Day.

Adrianna Gonzalez of Curtis Park, California, brought her children Olivia, 4, and Eva, 3, to participate in the children’s activities, which included an arts and crafts booth. She is a community grant leader for First 5 Sacramento’s play groups, which holds monthly events for families with children ages 0–5. 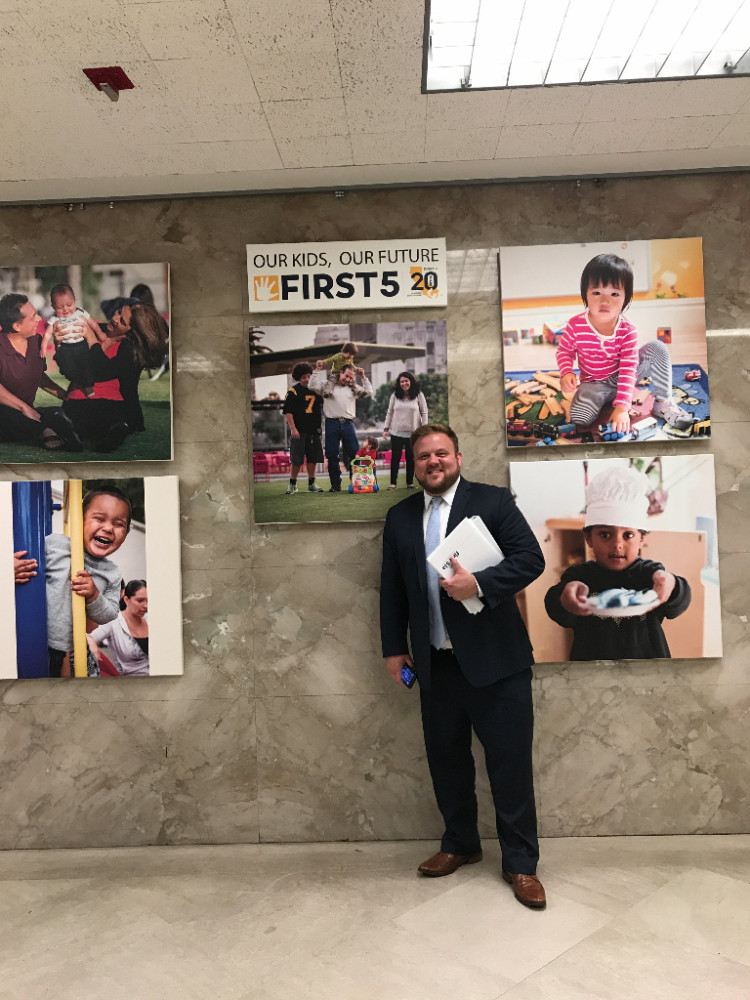 “First 5 helps you connect with your kids,” Gonzalez said. “It’s very important that they promote being social. And it helps me as a parent just to have that connection with other parents.”

The impact of Advocacy Day continues to be felt in the state capitol.

“In follow-up meetings with legislative offices, they said they heard our message loud and clear and would be echoing support for our priorities,” said Barth. He noted that First 5 LA will continue to advocate for state lawmakers to prioritize early childhood in the state budget through the June 15 deadline and advance its legislative agenda through the September deadline to send new bills to Governor Brown.

Commissioners who attended Advocacy Day were quick to credit the work of First 5 LA’s Public Policy and Government Affairs team.

“Four years ago I traveled to Sacramento for meetings, but walked in without any official asks,” said Commissioner Pleitéz Howell. “Four years later we walked in with three official asks. It was an awesome experience and I really saw how our organization is fighting for kids at the state level. We literally are helping the tent grow for young kids.”

We literally are helping the tent grow for young kids. -Karla Pleitéz Howell

And since it’s all about kids, what better way to end the tale of Advocacy Day 2018 than with a few words from 4-year-old Harper, who attended legislator meetings with her mom, First 5 Sacramento Commissioner Christina Elliott?

The duo was a perfect pair to tout the importance of early education to lawmakers. Asked what she liked about preschool, Harper replied “I like to learn about letters.” Her favorites are “H” and “F.”

It wasn’t the first time Elliott had taken her daughter to Advocacy Day. Her oldest, Adelyn, had attended before. But this year, higher education called.

“Adelyn was upset she couldn’t come today,” Elliott said, “but she’s in kindergarten now and she couldn’t miss school.”