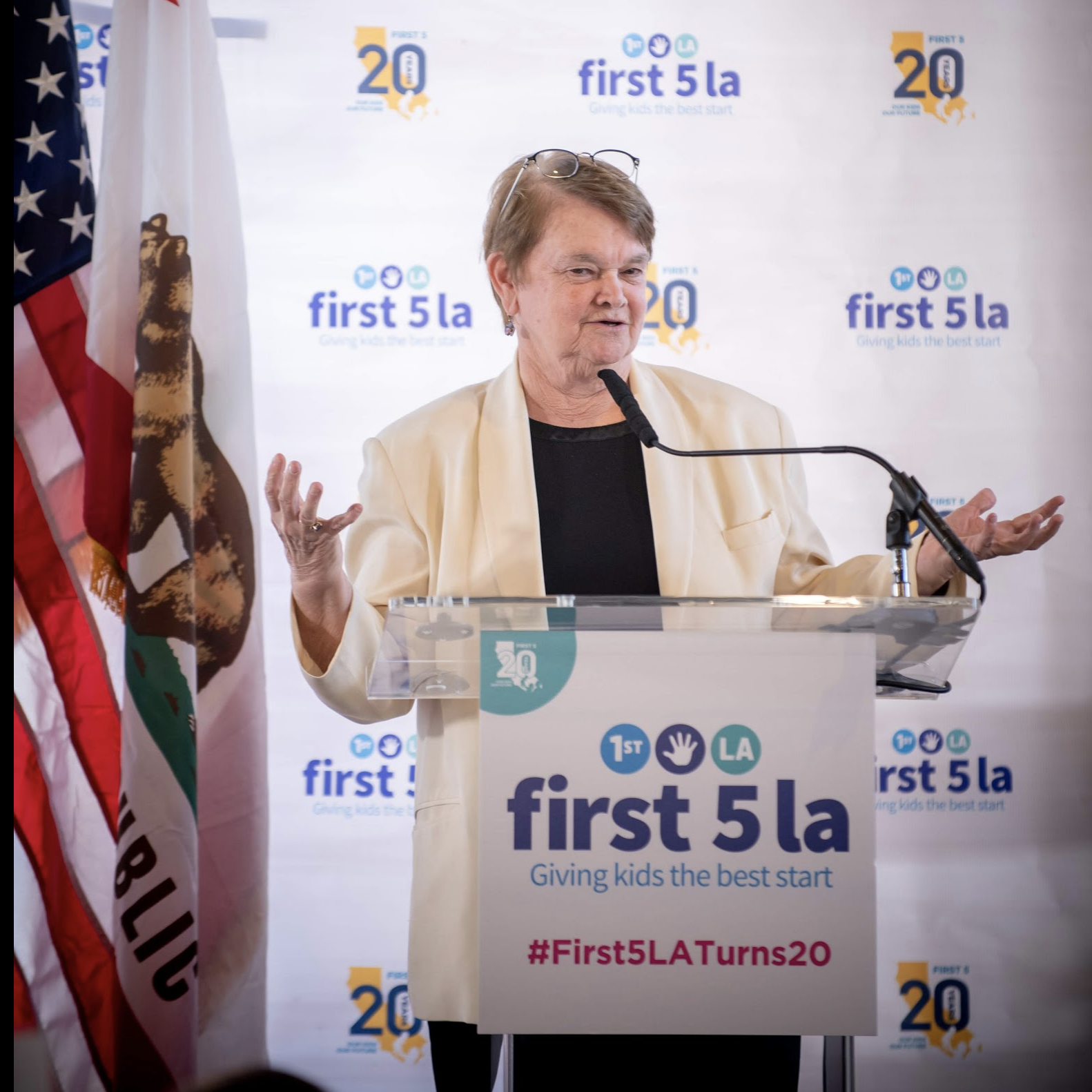 While some 20th anniversaries are celebrated with gifts of china or platinum, the passage of Proposition 10 that created First 5s in California in 1998 was marked on Nov. 9 by exchanging gems of progress, partnership and promise born of First 5 LA’s past two decades of work to improve the lives of young children and their families in Los Angeles County.

The anniversary event itself was steeped in history, drawing more than 150 invited guests to Pico House aside historic Olvera Street in downtown Los Angeles. Philanthropists and other partners, First 5 LA Commissioners past and present, elected representatives and government officials, grantees and other dignitaries celebrated amidst a backdrop of past accomplishments and an expert panel providing insights on the current state – and future – of early childhood.

Although actor/director/producer Rob Reiner was not in attendance, his presence loomed large in First 5 LA Executive Director Kim Belshé’s opening remarks, which were rich in gratitude for his launch of the voter-passed proposition that created the statewide network of First 5s.

“It was Rob Reiner who 20 years ago really stepped up in the effort to address what was being characterized as an inadvertent epidemic of neglect of our youngest children,” Belshé said. “Informed by that understanding, he launched Prop 10, which continues today as First 5 California, 58 county commissions and the Association of First 5s.”

In true cinematic fashion, Reiner provided his own reflections on the past two decades in a video that was shared at the event.

Belshé, who served on the state’s First 5 Commission with Reiner in 1999 after the passage of Prop 10, noted that she had three nephews who were toddlers at the time. Now attending USC and on a path to success, Belshé noted that their path is “reflective of their opportunities and the strong foundations they experienced in life.

“But what drives me and what drives so much of this work is our understanding that too many kids don’t have those opportunities. The research tells us that this opportunity gap can take hold as early as nine months and can double by the time a child reaches age two. We also know that kids who show up to kindergarten behind are disproportionately dual language learners, low income kids, kids of color. Those are the kids who tend to stay behind. And that is just not right. Those kinds of inequities amongst our youngest children are unacceptable, they are unjust, and they are avoidable.”

L.A. County Supervisor and First 5 LA Board Chair Sheila Kuehl echoed this sentiment: “When Rob first thought of this, it was not at the top of a lot of people’s radar. And the truth is it’s kind of the same still. On the front page of the Times you’re rarely going to see stories about what our children 0 to 5 really need. Because that’s the long haul, that’s the big planning, that’s the step-by-step kind of work that 20 years ago First 5 was founded to do and for 20 years has been building, building and building.”

Kuehl touted the impact of home visiting and other First 5 LA investments over the past two decades, from which key accomplishments were presented for guests in data boards at a gallery walk. Highlights of this data can be found in this section from First 5 LA’s new website, which was revamped in conjunction with the 20th Anniversary.

“First 5 LA is the leader, First 5 LA is the visionary,” said Kuehl, who with Janice Hahn initiated a 2016 L.A. County Board of Supervisors’ motion to enhance and expand home visiting in the county – just the first in a number of significant developments in expanding home visiting at both the state and county level in which First 5 LA has recently been involved. 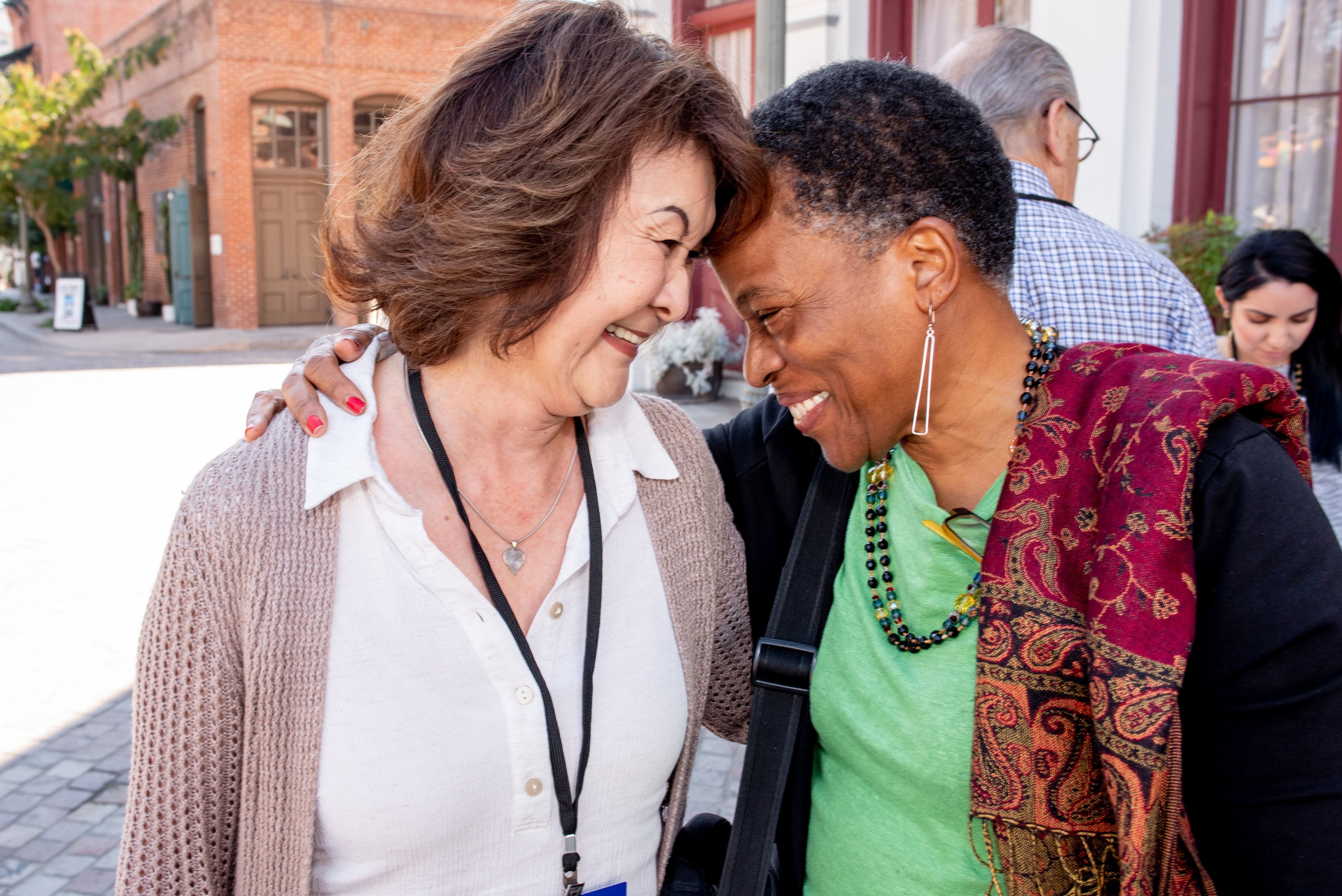 During the event, many in attendance had their own stories to share (see accompanying video) from the past two decades, during which time First 5 LA has evolved in its approach to improving outcomes for young children. Initially focusing on funding direct services, the agency’s 2015-2020 Strategic Plan combines key investments in four priority outcome areas with a focus on advocating for policy and systems change for a broader impact.

“We didn’t know all the obstacles in the early years,” said former First 5 LA Commissioner Marvin Southard, who joined the Board in its first year, 1999. “We ended up learning that you’re not helping kids unless you help families. And you can’t help families if you don’t help communities.”

“We didn’t know all the obstacles in the early years, we ended up learning that you’re not helping kids unless you help families. And you can’t help families if you don’t help communities.” – Marvin Southard

In 2010, First 5 LA created and managed the Best Start Community Partnerships in 14 geographic areas throughout L.A. County, bringing together and amplifying the collective voice of parents, residents and leaders to help create lasting change in their communities that promote positive outcomes for young children and their families. Since its inception, Best Start has evolved into 14 local networks and 5 regional networks, engaging more than 21,000 parents and residents.

In a nod to the new strategic plan, Southard added: “As we focused on the outcomes, we learned we couldn’t get the outcomes we wanted without partnering with other groups.”

The power of partnership with First 5 LA was praised by many of the past and present collaborators in attendance, including Dan Nieman, vice president of External Affairs with Para Los Niňos, which is the regional network grantee for Best Start Region 1.

“First 5 LA has a laser like focus on getting our kids what they need to make sure they have a strong start,” Nieman said.

“They realize they can’t do this work alone and need agencies like Para Los Niňos and others,” added Dr. Sarah Figueroa, Para Los Niňos vice president and COO. “We feel very much like a partner with them.”

“I think in the next five years it’s going to be even more exciting and fun to continue our partnership,” said Shannon Whaley, director of Research and Evaluation with Public Health Foundation Enterprises – Women, Infants and Children (PHFE-WIC), with which the First 5 LA Board this month approved an extended strategic partnership with First 5 LA on the Little By Little initiative. 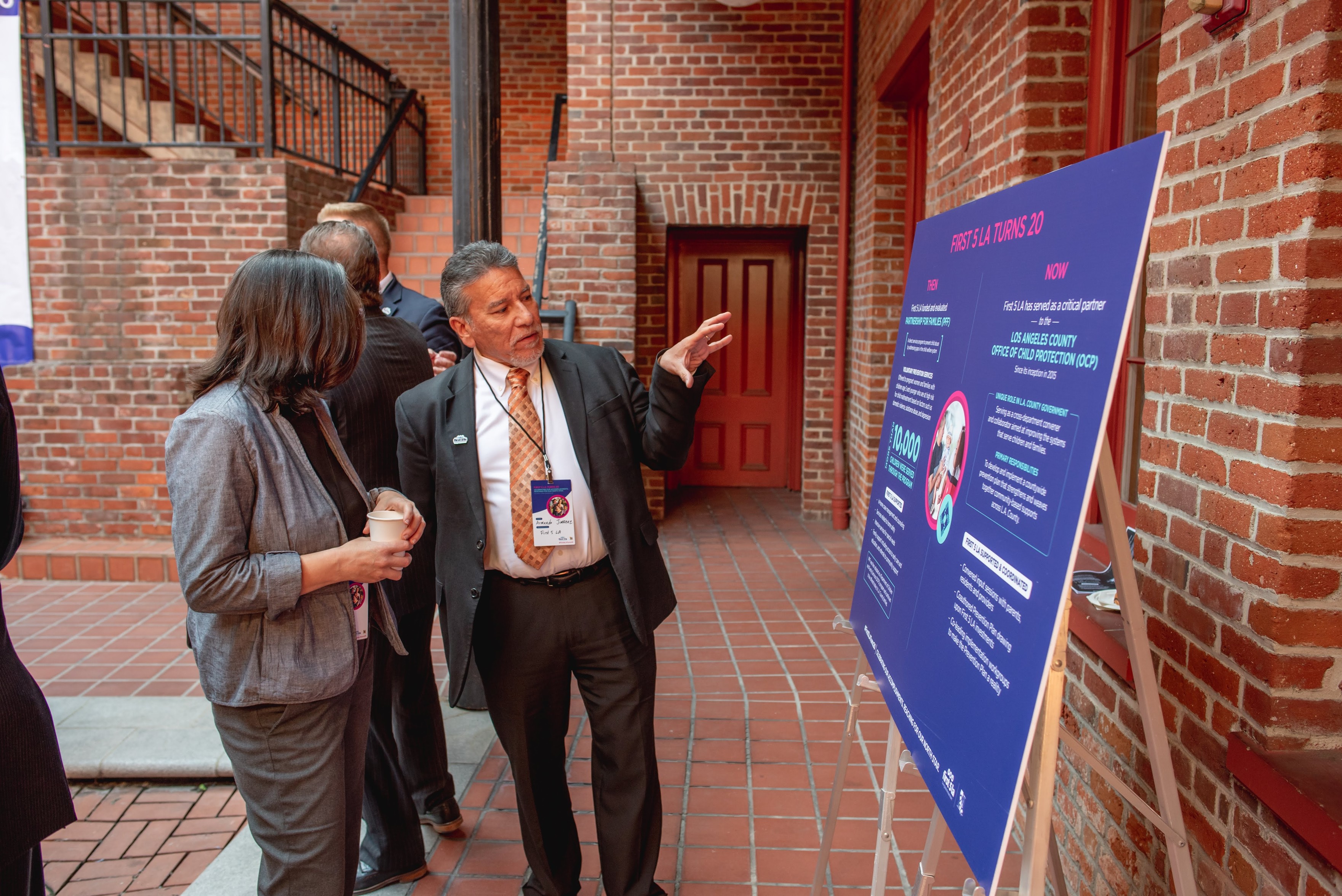 The event also created the opportunity to forge new partnerships, as well. Joel Cisneros, director of School Mental Health for the Los Angeles Unified School District, came to see how the needs of the school district and First 5 LA overlap.

“As a department, we’re looking at trauma-informed experiences,” he said. “We know that toxic stress has an impact on kids.”

Cisneros was happy to learn more about how First 5 LA is partnering with government agencies, funders and other public and private entities to advance trauma-informed systems change in L.A. County, including completion of an environmental scan, a report of recommendations and demonstration projects that pilot trauma and resiliency systems change strategies.

“I’m very excited about the possibilities and figuring out how we can move forward together,” Cisneros said.

For her part, Belshé thanked those in attendance who have worked with First 5 LA in the past and invited new partners to join First 5 LA in a better future, as defined by the agency’s overarching goal, or North Star: that by 2028, all children in L.A. County enter kindergarten ready to succeed in school and life.

She pointed to new opportunities stemming from Tuesday’s election just days earlier that in January will put the power of the governor’s pen in the hands of Gavin Newsom, whom she said “is stepping up and acknowledging that if we want our kids to be ready for school and successful in life, we have to start early.”

Putting kids first and foremost was on the mind of another lawmaker who attended the 20th anniversary celebration. As he proudly showed photos of his two young children on his phone, Assemblymember Miguel Santiago said: “Nothing is more important than developing little children.”

“I have two kids and I look forward to their smiles every morning,” he said, adding that lawmakers need to ensure that all young children have access to quality food and education to ensure that they wake up with a smile every day, as well. “We have a responsibility to make that happen.”

Understanding the current state of early childhood development is among the keys to ensuring the best start for kids today and achieving the goal of First 5 LA’s North Star in the future. To that end, the event featured a panel discussion by four experts in the areas of education, health, philanthropy and advocacy: Stanford University Professor of Education Deborah Stipek; Advancement Project Executive Director John Kim; Blue Shield of California Foundation President Peter Long; and Pomona Unified School District Superintendent Richard Martinez. 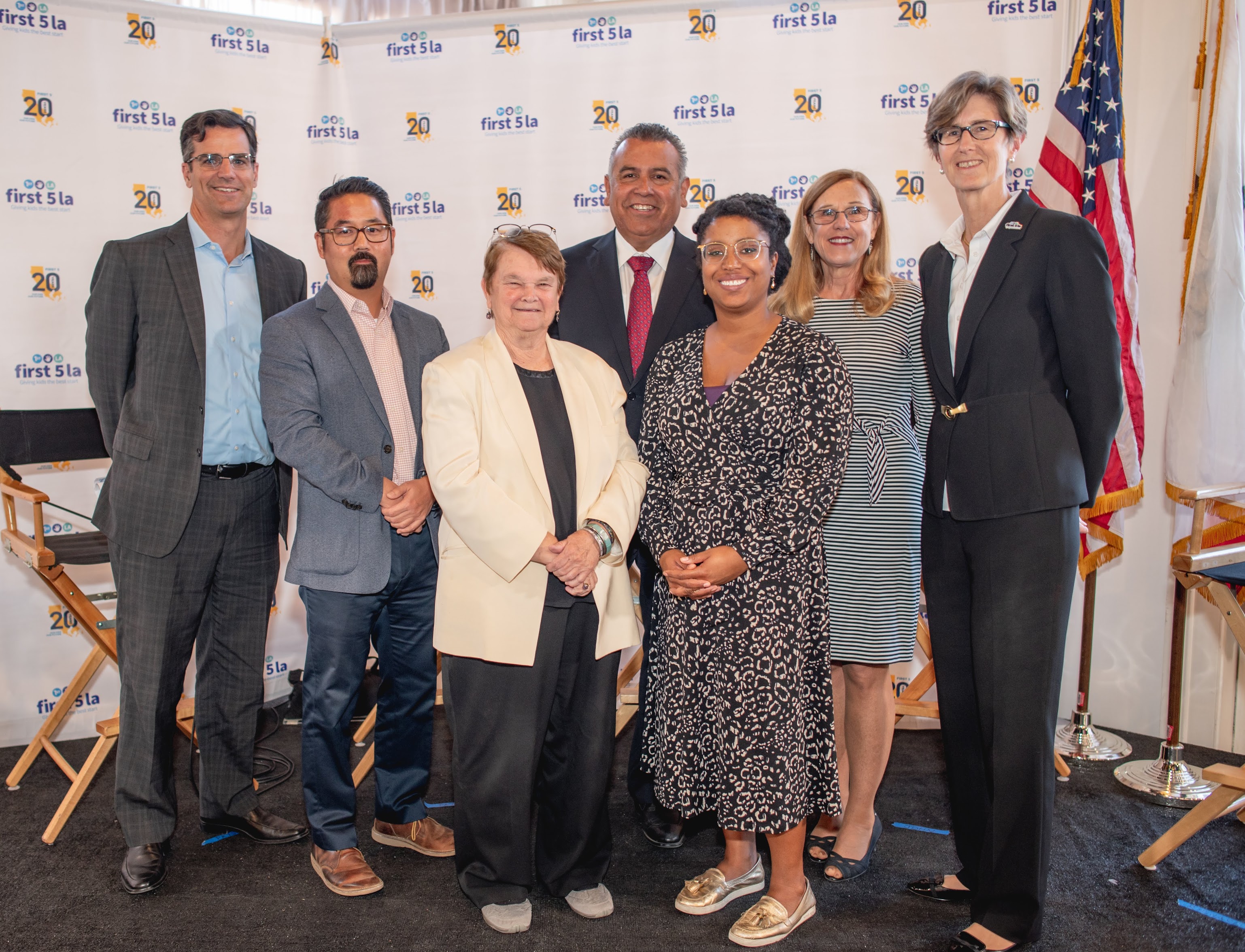 Moderated by KPCC Early Childhood Reporter Priska Neely, the hour of discussion delved into questions of equity, child care, literacy, the achievement gap, intergenerational violence and other challenges currently facing young children and their families. A number of notable statistics, quotes and kudos are highlighted below:

At the end of the discussion, Neely asked each panelist what differences they hope to see for young children 20 years from now.

“I love yours, Kim,” Martinez said in a nod to Belshé’s description of First 5 LA’s North Star. “I like the 10-year plan. So by the time they reach third grade, they are reading to learn new things, not reading to learn how to read.”

Martinez was not the only one to share their inspiration from First 5 LA’s aspirations.

“As the CEO of a foundation that’s about 15 years old, we look up to First 5 LA,” Long said. “20 years. We see what the future looks like and it’s great in terms of what we learn every day and what foundations are learning from one other.”

“It’s really exciting to watch First 5 LA’s evolution in its adoption of a policy agenda and a more sustainable approach,” said Ron Brown, president and CEO of Children’s Bureau. “2028 is a key takeaway for me. We have a decade.”