For many parents on lengthy wait lists to enroll their children in early learning programs, the fear of having their children fall behind in their cognitive and socio-emotional growth is very real.

Maria Mayoral had twice as many reasons to worry.

The mother of 3-year-old twin boys, Nathan and Levy, Mayoral had been on the preschool waiting list for months at the Lancaster School District. 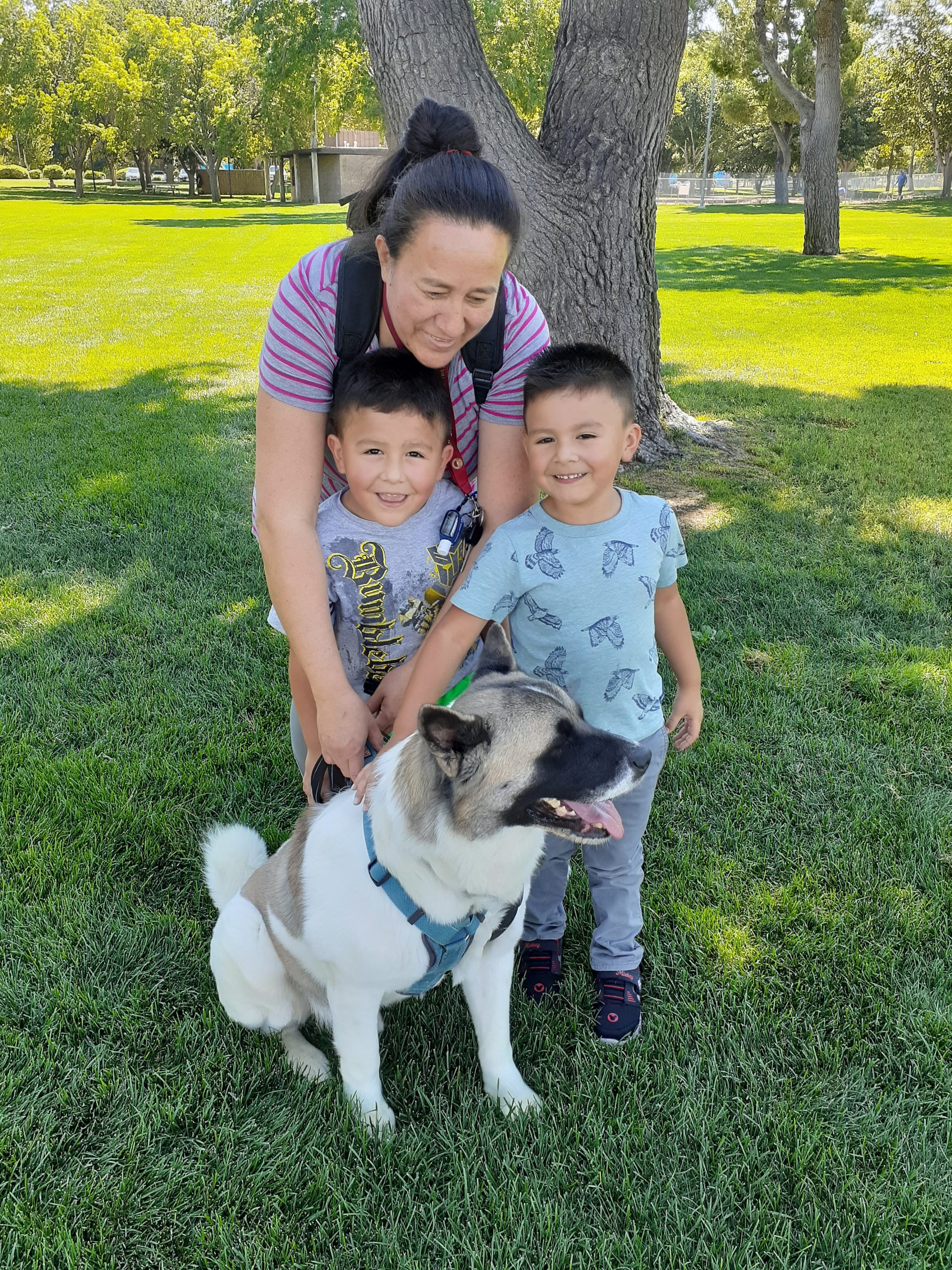 “I was feeling like they are going to be behind in their learning,” Mayoral recalled. “I was trying to get any resources I could to teach them at home. On the internet, I was printing out letters, shapes and colors.”

While the state has permitted preschools and other early learning facilities to stay open during the COVID-19 pandemic, thousands have closed. As of the latest numbers from September, 36 percent of family child care homes and 63 percent of child care centers have shut their doors in Los Angeles County. As a result, parents are finding it harder than ever to find early learning opportunities for their children.

Fortunately, the stay-at-home mom was involved in her community, including meetings in Lancaster with Best Start, First 5 LA’s primary investment to promote community engagement, collaboration and leadership to give children their best start in 14 historically low-income neighborhoods and communities of color in L.A. County.

Mayoral heard about Preschool Without Walls (PWW), which offers two hours of weekly free early education classes for children birth to age 5 in six locations throughout Palmdale and Lancaster. Funded in part by Best Start Lancaster and Palmdale, the Antelope Valley’s six PWW classes are held outside of a traditional school setting: in parks, community wellness centers and — in Mayoral’s case — the neighboring Terra Nova Mobile Home Park in Lancaster.

She quickly enrolled her twins. 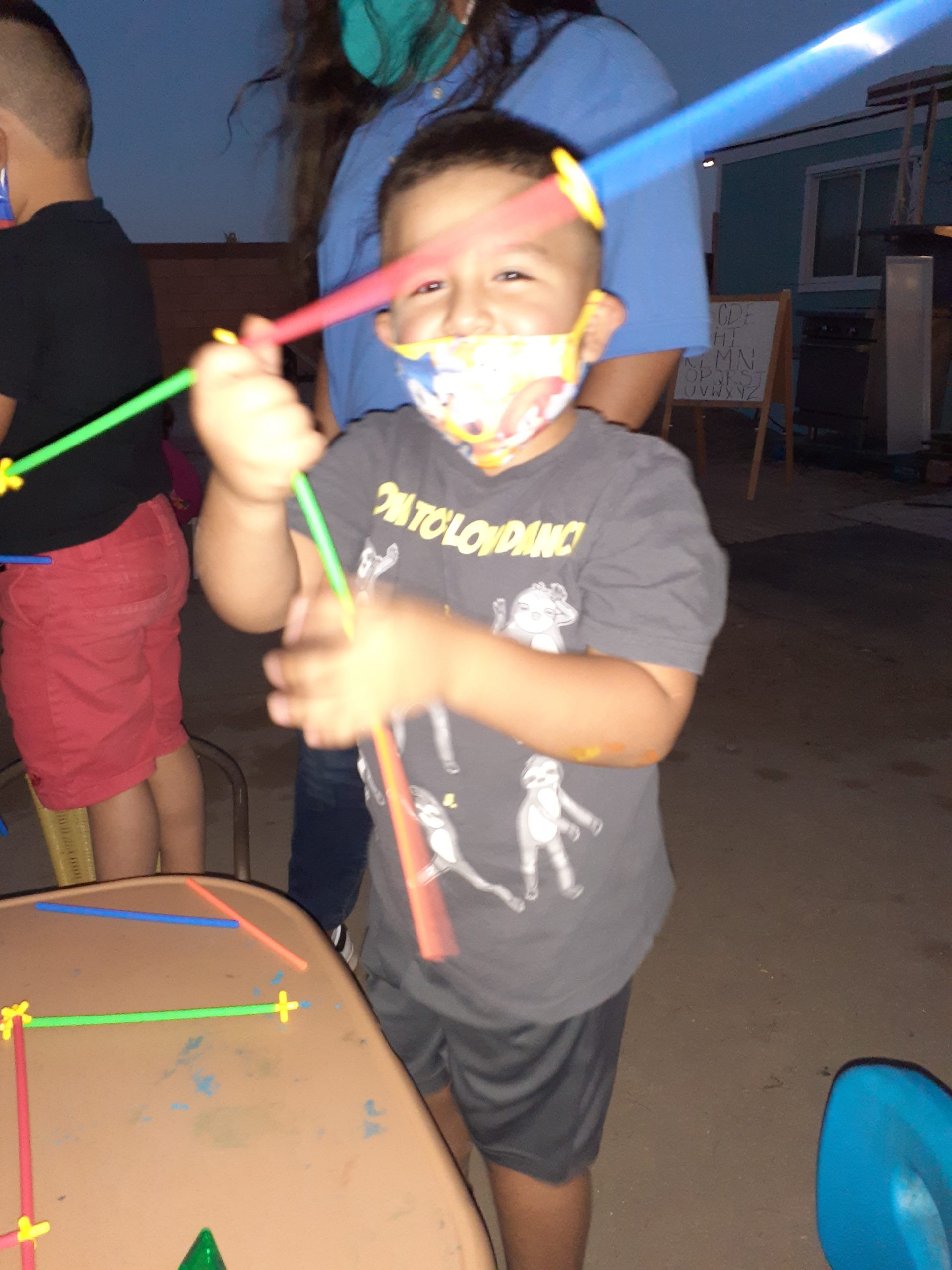 “It was their first time in school,” Mayoral recalled. “My boys love it. They have fun activities. They dance and sing the alphabet. They have learned their letters, colors, shapes and numbers. Their motor skills have improved. They raise their hands when they want to speak. They’ve learned how to share. And they get excited when they have homework to do at home.”

Unlike most early education, PWW requires parents to participate in the classes with their children. Another unique aspect: in the Antelope Valley, the classes are taught by parent volunteers.

“For me, it’s more than okay that teachers are parents. The teachers are really good with the kids,” Mayoral said. “And I’m so happy that parents are able to be with their kids. It helps me be a better parent because I’m seeing how they are learning and how they are growing.”

Parent-teacher volunteers in the Antelope Valley receive STEM-based training and other education skills from Strength-Based Community Change (SBCC), a First 5 LA grantee and partner that originated the PWW classes in the South Bay in 2001. 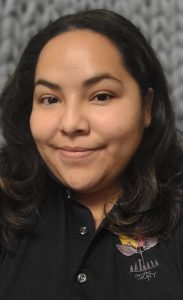 “The trainings include information on what children need to successfully enter kindergarten,” said SBCC’s Erika Schwerdt, who serves as the Local Network Community Organizer for Best Start Region 5 of Lancaster and Palmdale. “The curriculum parents learned was based on a learn-by-playing style. It lets parents understand what is happening in a child’s brain when they sing a song or do a certain craft.”

PWW addresses the critical areas of child development through a curriculum that focuses on early literacy, mathematics, colors, songs, STEM-based themes and open-ended activities aligned with the themes of the week or month. Classroom activities may include reading a book aloud; learning letters, shapes, numbers and colors; dancing and singing; and engaging in a craft or art activity (possibly tied to a letter, as in drawing an elephant for the letter “E”).

The Antelope Valley PWW program began in 2017 as a pilot project in Jackie Robinson Park. While it was modeled after the South Bay PWW program, the two are not related. However, both programs share the goal of preparing children to be ready for school and an understanding that parents should learn alongside their children in preschool because a parent is a kid’s first teacher.

“It was different in the way we empowered the parents to take on the role of the teacher,” Schwerdt said. “Long Beach PWW uses hired teaching staff and paid assistants. Our PWW model gives the opportunity for parents to demonstrate their skills and to be accountable for what the kids are learning.”

“You can compare it to a pop-up preschool idea,” said PWW Director Dalilia Cornejo Jones of SBCC.  “PWW’s original name was Preschool on Wheels because it used to be a mobile program in a van. We later partnered with local parks, libraries and community centers where we established set locations.”

“We call it Preschool Without Walls because we can set up anywhere,” said Best Start Palmdale partnership member Marcia Sanchez, who leads SBCC’s PWW effort in the Antelope Valley.

This flexibility came in handy during the pandemic, when Terra Nova PWW, which met outside in the mobile home park, remained open for in-person classes with safety precautions. This included temperature checks, mask-wearing, using hand sanitizer and prebagged classroom materials, as well as seating family units at their own tables six feet apart. In October, colder weather put Terra Nova’s in-person class on hiatus through January. 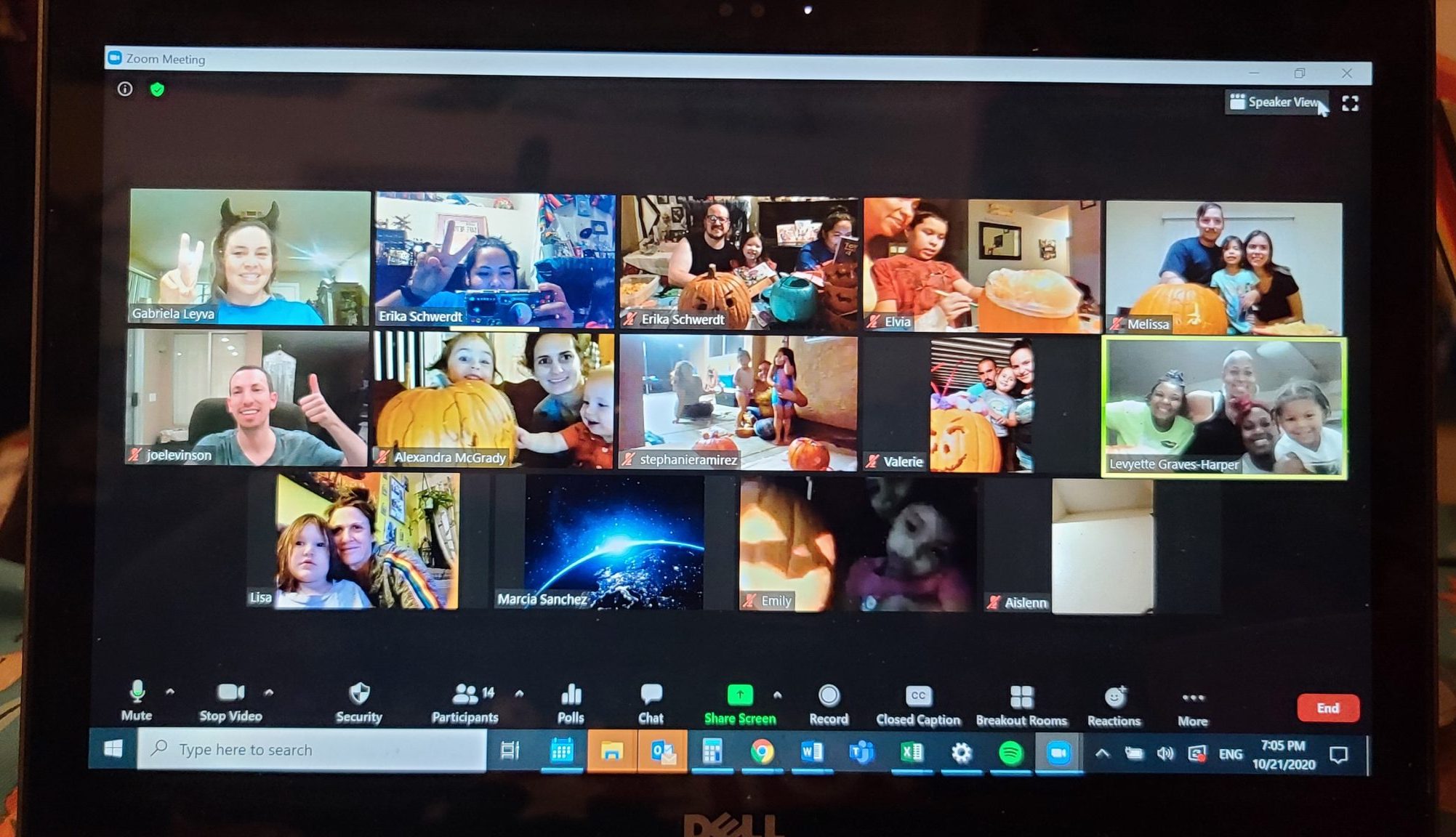 Meanwhile, the five other PWW sites in the Antelope Valley—as well as all 12 PWW sites in the South Bay program — transitioned to virtual classes during the pandemic without skipping a beat. Or a holiday. 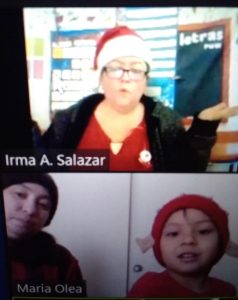 Wearing reindeer horns, stocking caps and elf ears, the children in Irma Salazar’s Sopa de Letras PWW class in Palmdale joined together in early December on Zoom. Some connected through a parent’s smartphone, others with laptops. With Salazar speaking in both English and Spanish, the children watched a virtual video of the book, “Árbol de Navidad,” practiced their shapes, recited words that began with the letter “L” and learned colors through holiday crafts.

With their parents looking on, the children shouted out the colors as they decorate the tiny trees with miniature ribbon, ornaments, and stars: “Yellow!” “Green!” “Red!” 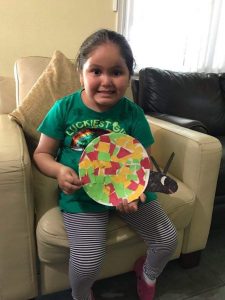 “Pre-COVID we would have had a potluck at the park. So instead, we had parents bring something to class that was traditional in their country,” said Cornejo, whose classes are an hour long. “Pupusas, pozole, chicharrón. We shared who we are culturally, what the ingredients were and why it was a favorite food.”

It turned into a teachable moment.

“Three out of 15 of my kiddos brought pozole,” Cornejo said with a laugh. “We talked about statistics. We practiced our mathematical readiness.”

Asked why she became a PWW teacher, Salazar, a former Head Start teacher’s assistant, said: “I love to teach, and I think children should not have to wait to be 4 or 5 years old to start learning. They don’t have a lot of opportunities or openings for preschool or Early Head Start in the Antelope Valley. And sometimes parents don’t qualify because the income is a little high.” 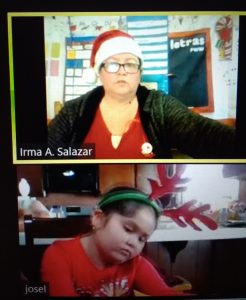 Salazar added that it is important for Best Start parents and grandparents to get involved with PWW “because we are helping to create thoughtful citizens that will do thoughtful things for their community. And Best Start is a program for the betterment of the community. It’s also good for the school district because the kids will go into the district ready to learn.”

So how effective is PWW?

“I have talked to parents who say that when their child enters kindergarten they are so advanced, they don’t have separation anxiety, can manage the tools provided, and are more natural at playing games than the children who have not been in Preschool Without Walls,” Sanchez said of her Antelope Valley participants. “And parents who are involved in PWW are more involved in school once their kids go to kindergarten.”

“We recently conducted our first alumni focus group, which gave plenty of feedback on how children were more confident and ready when starting kindergarten after attending PWW,” Cornejo Jones said. “Families also come back with their younger children once their older ones move on to kindergarten.”

Even kids who have graduated PWW can’t seem to get enough of it.

“I have had kids who are now in kindergarten and first grade and they jump into a zoom conference with us,” Jessica Cornejo said. “They still want to participate in Preschool Without Walls.” 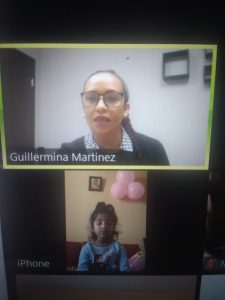 The popularity of PWW can be seen in its growth. With the help of a $25,000 grant from First 5 LA in July, Cornejo Jones said SBCC opened a new virtual PWW classroom in Long Beach with 19 participants from Best Start. Online participation has also sprouted during the pandemic.

“We have adapted to Facebook Live, Instagram and Zoom platforms. We are on social media three times a day,” said Sabrina Silva, SBCC’s Director of Prevention and Aftercare. “We have up to 500 views per class from people throughout California.”

“I have a daughter with special needs. In raising her, the worst experiences she had was at this age,” said Sanchez, who is training to teach the class. “Not being able to have a preschool education affected my daughter’s growth and if there was someone out there who could have helped, it would have made a difference. I want to help other parents who have special needs children, so they can thrive.”