Off to a Good Start

Oh, what a difference a year makes.

In January 2017, Yanci Panameno was “saddened” when Governor Jerry Brown released his budget proposal for the 2017–18 fiscal year, which would have suspended funding for nearly 3,000 new preschool slots in the state. At the time, the child development specialist and mother of three in the San Fernando Valley was struggling to find affordable child care for her 2-1/2 year old son, Michael.

“I see the need for families in our community to have home visiting.” -Yanci Panameno

“It’s a real problem, not just for us, but for so many families in the community,” Panameno said then.

This year, however, when the governor released his proposed budget for 2018–19 in January — which includes hundreds of millions in new dollars to benefit young children and their families — Panameno summed up her reaction to the increased funding in two words: “Like, wow.”

Panameno was pleased that the governor’s proposed $190.3 billion spending plan builds upon past investments to support families and also outlines the creation of new programs to support young children and their families. Of particular interest to Panameno were:

“I see the need for families in our community to have home visiting,” Panameno said. In addition to the stress that comes from becoming a new parent, she said a lot of families in the community are dealing with stress from immigration fears to increases in rent. “The impact of stress brings families down emotionally. That stress reflects on the children. Home visiting can teach parents how to cope with stress. When we focus on the mental health of parents, we have the ability to help them raise healthy children.” 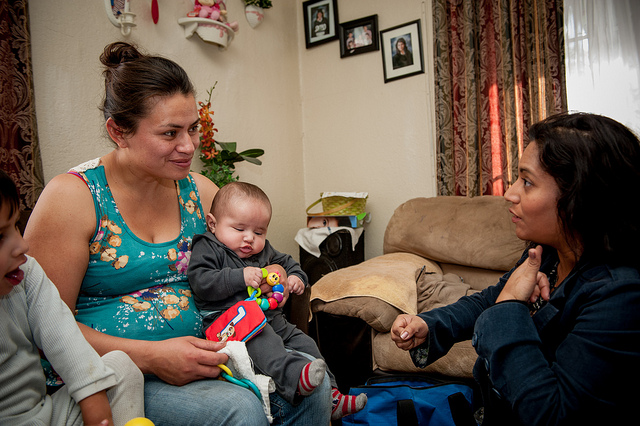 Home visiting is one of First 5 LA’s signature investments. This includes Welcome Baby — a free, voluntary program for Los Angeles County pregnant women and new moms that provides information, support and a trusted partner to help them through the journey of pregnancy and early parenthood.

Thanks to additional funding that came through last year to fund new preschool slots after the governor and state legislature agreed to a final budget last summer, Panameno was able to finally enroll her son in preschool last fall. And while her own son is now benefitting from early education, Panameno knows how important affordable, available preschool slots are for other families in her community, where she serves on the First 5 LA-funded Best Start Panorama City & Neighbors Community Partnership.

A budget is a statement of values and priorities. Kim Belshé

“The more opportunities to enroll a child in preschool, the more children will be prepared for kindergarten,” she said.

First 5 LA joined L.A. County parents like Panameno in their praise of Governor Brown’s budget proposal, which are squarely aligned with First 5 LA’s own priorities.

“A budget is a statement of values and priorities. Our shared priority across the state must be the well-being of our youngest children,” said Kim Belshé, executive director of First 5 LA, an independent county agency that advocates on behalf of young children and their parents. “Tomorrow depends on the decisions we make today. We thank Governor Brown for prioritizing the programs and services that support preschool-aged children and their families, and applaud his inclusion of family strengthening home visiting services.”

Among the other notable highlights from the governor’s budget proposal that prioritize young children and their families: 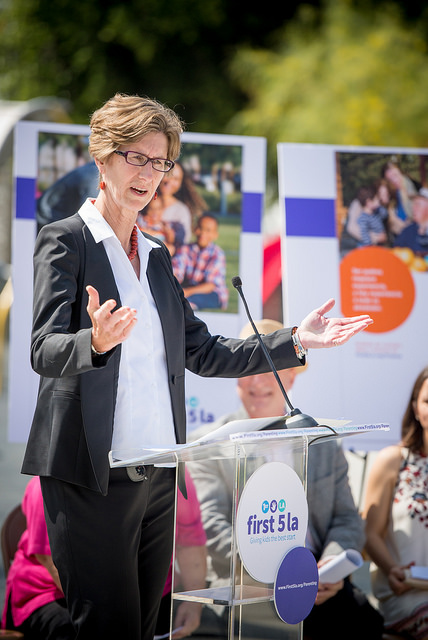 In the coming months, state legislators will review the governor’s proposed budget and begin to craft their versions of the annual spending plan. The Legislature’s final budget decisions typically wait until after May, when the governor releases a revised budget that may modify his January proposal based on economic and revenue updates. The Legislature must pass a budget bill for the upcoming fiscal year by midnight on June 15. The governor has until June 30 to sign the budget bill into law.

"At First 5 LA, we believe as kids’ well-being goes, so goes the state.” -Kim Belshé

Even as this budget process begins, First 5 LA Public Policy and Government Affairs Director Peter Barth said First 5 LA is “already working closely with our state advocates and other advocacy partners, including the First 5 Association and First 5 California, to build upon the governor’s proposal to ensure the final budget deal better meets the needs of young children and their families in L.A. County.”

In the past, policymakers have not prioritized investment in a child’s early years, even though research shows that 90 percent of a child’s brain is developed by age 5. California’s families face significant challenges, as well. For example, 1 out of every 5 children in California live in poverty, and in L.A. County the child poverty rate is even higher at more than 28 percent. Parents with two children may pay nearly half their wages for child care in L.A. County, and statewide more than 1.2 million children do not receive the subsidized child care services for which they are eligible.

“We’ve all heard ‘as California goes, so goes the nation.’ At First 5 LA, we believe as kids’ well-being goes, so goes the state,” Belshé continued. “We look forward to working with the Legislature and the Administration to prioritize investment in the full prenatal to age 5 continuum of services as they continue to craft the budget. We can’t afford not to. When we invest in the first five years of a child’s life, we can change a child’s future.”