Impact of the Public Charge: A Health Care Provider Perspective

Since it was unveiled this summer, the Trump Administration’s “public charge” final rule has spawned concerns from immigration advocates, social service agencies, child advocates and health experts. First 5 LA has been outspoken about its opposition to this rule change because it would endanger the health and well-being of immigrant families.

The rule would allow immigration officials to deny a green card to an immigrant if the individual is receiving public benefits that are intended to help individuals and families meet basic living requirements. This could force immigrant families to forgo access to a wide array of public benefits, including food supports, housing assistance and health care.

Even before its scheduled enactment this month, the public charge final rule has created a “chilling effect” wherein people may refrain or disenroll from benefits because of confusion or fear. In the area of health care, one report by the UCLA Policy Center for Health Policy Research estimated that this “chilling effect” could impact 2.2 million Californians in immigrant families enrolled in SNAP and/or Medicaid. Children would be most impacted by this chilling effect, particularly Latinos and Asians.

Even though three federal judges issued injunctions earlier this month temporarily blocking the public charge final rule from going into effect as planned on Oct. 15, the fears among many immigrants remain.

As part of a series of articles on the impact of the public charge final rule, the Early Childhood Matters Newsletter is interviewing First 5 LA partners, grantees and stakeholders who are involved with the immigrant population.

Focusing on the public charge final rule’s potential impact on health care, this first article features a Q & A with Berenice Núñez Constant, vice president of government relations at AltaMed, a partner with First 5 LA’s First Connections program that prioritizes early screening and intervention for young children and connects them and their families with culturally and linguistically appropriate services as early as possible. 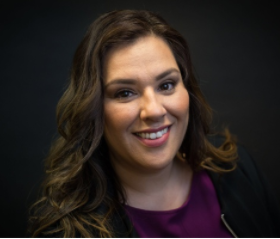 Earlier this month, three federal judges announced injunctions to block the public charge final rule from taking effect. How has AltaMed reacted and how does this move impact AltaMed’s current strategy regarding the rule?

Firstly, I would like to take a moment to acknowledge that this was a huge victory! Actions like these are reminders that though these are turbulent times, the arc of history still bends towards justice. Since the federal judges blocked the public charge rule from going into effect, AltaMed issued companywide messaging to inform its employees about the recent development and how to address it with patients.

AltaMed’s website, clinic waiting room monitors, and on-hold message inform patients and the public that the updated rule has not gone into effect. We’re doing what we can to disseminate the message that the rule has been blocked and are encouraging patients and families to continue accessing the health care services that they need to grow healthy.

We are also reminding our employees and patients to stay tuned for further updates as events unfold. Finally, we want them to know that it is also a good time to speak with an immigration attorney to better understand if the public charge may impact them, if implementation ends up proceeding at a later date. Even though this rule has been halted, we now have a lot of work to do to change the public’s understanding about public charge in the communities we serve.

What is your greatest concern if the rule goes into effect?

AltaMed’s greatest concern is that patients will lose access to the health care services they need and stop utilizing programs for which they qualify simply out of fear. Our patients, especially children and pregnant women, and their family’s health are very important to us. We are committed to serving our members with dignity and respect, and we encourage them to seek regular care.

How has the confusion or fear over the rule already impacted your patients? Are there reports within AltaMed of a reduction in people receiving medical services or dropping out of AltaMed care altogether?

A number of patients have expressed confusion on who will be impacted by this new rule. We’ve received so many questions from our patients that we’ve trained our front office staff and call center representatives on how to respond to questions regarding public charge. Unfortunately, we are seeing the “chilling effect” among our patients and have been hearing stories of patients coming in and telling their doctor that it’s their last visit because they fear that receiving the care they need will lead to deportation. Additionally, they are worried that they won’t be able to continue to afford to pay for medical services.

What have you done to address confusion or fears in the communities you serve? Similarly, how are you acting as an advocate on their behalf?

AltaMed’s top priority is to provide patients with accurate information regarding the rule. We have trained our front office staff to help answer patient questions and inform them of local resources for legal assistance.We have a fact sheet explaining public charge and who it does and doesn’t impact on our website. We also have information displayed on our clinic waiting room televisions.

We have participated as a lead partner in community trainings on the new rule. AltaMed is also planning informational town hall meetings and is partnering with trusted local legal experts to help connect them with patients. Organizations and groups with which we have longstanding relationships serve the same population as we do and can provide more resources for patients to evaluate their specific situation.

If it goes into effect, how do you think the rule will impact your clientele?

There will be a reduction of patients seeking care for themselves and their family members. Patients may also choose to disenroll from programs for which they qualify out of fear. Without regular access to care, our communities could be at risk for various public health issues if patients no longer receive the medical care they need.

Will AltaMed continue serving those impacted?

For 50 years, AltaMed has provided access to health care services for everyone, regardless of their status or their ability to pay and will continue to do so.

How can First 5 LA help elevate the work AltaMed is doing regarding the public charge final rule?

No public meeting link is available due to this being a closed session.

There will be an opportunity for public comments during this closed session.

IMPORTANT: All public comment(s) must be received by 4:30 pm the day of the meeting in order for them to be addressed during the meeting.