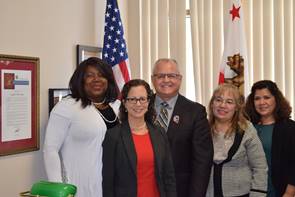 “We’re here to talk about the children.”

Spoken by a small, bespectacled grandmother by the name of Zonia Sanchez, these seven words reached across the desk and grabbed the ear of the Lancaster lawmaker seated beneath the California State flag.

As Assemblyman Tom Lackey listened, Sanchez told a tale too often heard from other caretakers of young children like her.

A few years ago, Sanchez’s daughter became a new mother. Yet because she was single, she could not go to college and take care of the baby at the same time. So she waited – and waited – to move up the waiting list for subsidized child care. Finally, Sanchez quit her job in order to take care of her grandson so her daughter could go back to college. Further attempts to enroll the boy in subsidized child care failed because her husband, a carpenter, and her daughter, a supermarket clerk, earned too much. Then, when the boy was 3, they tried to enroll him in a preschool program – but there were 150 children on the waiting list ahead of him.

“We had to wait a year for him to be enrolled. And there are hundreds, or thousands, of parents like us in the area.” -Zonia Sanchez

“It was very frustrating,” Sanchez recalled, her voice cracking with emotion. “We had to wait a year for him to be enrolled. And there are hundreds, or thousands, of parents like us in the area. You can see the need. Where can we find support? The children are at risk because if we want them to be positive members of society, early care and education is important.”

Lackey, who started out as a special education teacher, responded with the three words Sanchez most hoped to hear.

In an effort to help local and state elected officials better understand the challenges facing young children and their families in Los Angeles County, members of the 14 First 5 LA-supported Best Start Community Partnerships have shared their stories and concerns with lawmakers in face-to-face discussions, at city council meetings and in other public forums. The issues they raise range from early care and education to kid-friendly parks to neighborhood safety.

Best Start brings together parents and caregivers, residents, organizations, businesses, government institutions and other stakeholders to collectively build a vision and develop strategies to create the best possible community for young children and their families. They collaborate to improve a community’s policies, resources and services to better support residents, and create that place where families can thrive. At the same time, Best Start provides the skills-building and leadership training to help them achieve their goals and ensure that children enter kindergarten ready to succeed in school and in life. This is done through groups called Community Partnerships, which meet on a regular basis.

“Best Start parents and residents have incredible insights and ideas about what can be done to create healthy environments for children.” –Antoinette Andrews Bush 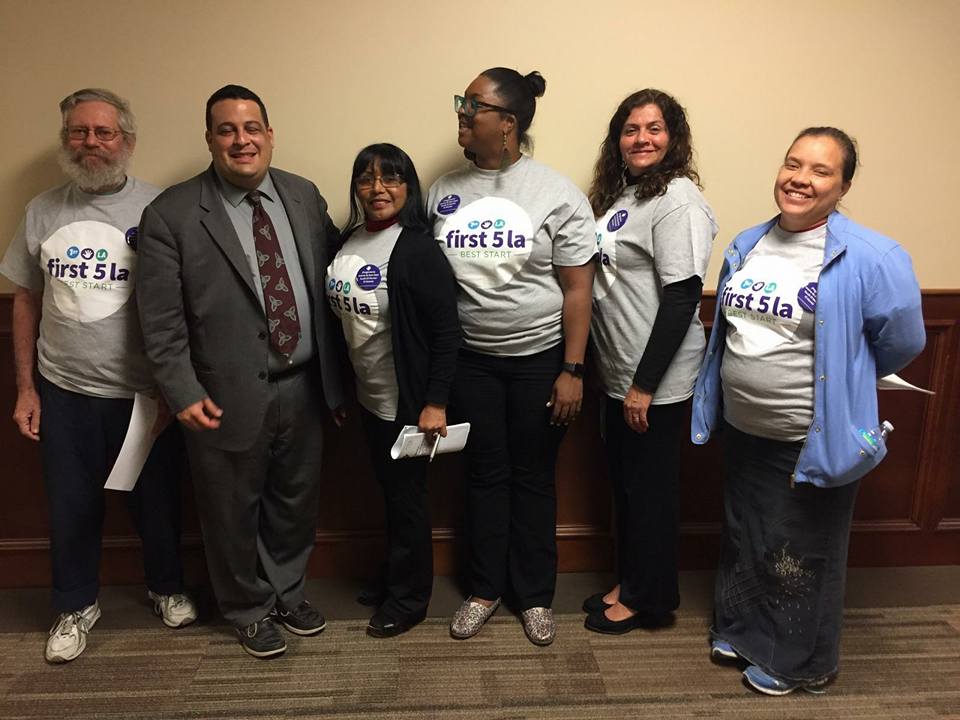 “Legislators are constantly bombarded with legions of special interests groups and professional lobbyists vying for their attention,” said First 5 LA Vice President of Policy and Strategy Kim Pattillo Brownson. “Parents uniquely can break through all of the noise because children are not a special interest group. Parents can mostly clearly share how they are striving – and often struggling – to give their children a fair shot at success. First 5 LA’s role is to elevate their voices and then push hard for solutions that better support our kids.”

As illustrated by Sanchez’s story, the top of the agenda in the meeting with Assemblyman Lackey was ensuring that young children have an opportunity to learn. While Governor Jerry Brown’s revised budget in early May provided some good news in that arena, significant child care and early education shortages persist. The California Budget and Policy Center found that child care and preschool is still funded 20 percent below pre-recession levels and that a typical single mother in California would have to spend two-thirds of her paycheck to cover child care costs. In Los Angeles County, licensed early care and education centers and family child care homes are only able to serve 1 in 7 working parents with infants and toddlers, according to The State of Early Care and Education in Los Angeles County: Los Angeles County Child Care Planning Committee 2017 Needs Assessment. Two parents working minimum-wage jobs full time now earn “too much” to qualify for state subsidized child care and preschool. Statewide, more than 1.2 million children eligible for subsidized child care did not receive services from state programs in 2015.

Whigham, a 30-year-veteran child care provider, pointed out to the Assemblyman that the child care businesses, too, are being impacted. She has helped a number of low-income parents acquire scholarships to pay for their child care and covered costs in some cases when parents struggled with state subsidy eligibility requirements and processing problems.

“My struggle as a business is helping parents because they are struggling.” -Sabrena Whigham

“My struggle as a business is helping parents because they are struggling,” Whigham told Lackey. But, she added, she tries to ensure every child has access to early care and education because, if she doesn’t, “the children are missing out.”

While noting that “there are many ongoing demands of state government funds and just a limited amount of money in the pot”, Lackey praised the Best Start trio for making “a very good argument today to a very significant problem in early child care and education, and to make sure we give children the skills they need to be competitive. It’s a competitive world.”

This is a problem that deserves attention without punishing the group of people that need help, he added. “It’s difficult. Children don’t choose their family’s circumstances.”

Then the lawmaker paused.

“Sharing your stories is what I need to hear,” Lackey said. “Otherwise, I’m hearing a statistic. It doesn’t have the same impact as when someone comes in and looks you in the eye and shares a story.” 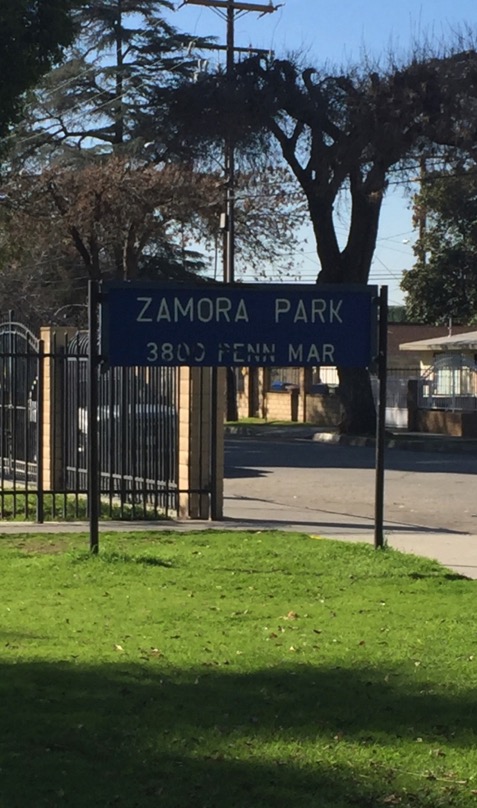 From her home in El Monte, Yadira Lue can see Zamora Park across the street. And when her 4-year-old boy wants to go play on the swings, she takes him outside.

And walks past the park.

Two miles later, she is at the closest safe park with play equipment for her young child: San Angelo Park in La Puente.

“I see people hanging out there who should not be there after 10 or 11 at night.” -Yadira Lue

The reason: Lue does not like what she sees going on in Zamora Park from her home.

“I see people hanging out there who should not be there after 10 or 11 at night,” she said. “And there are homeless people in the mornings.”

And while the gang problem no longer plagues the park, the history of violence is still etched in the burned benches and lingering graffiti. Nor does the decaying equipment and lack of illumination inspire Lue to play with her young son across the street.

Fortunately, Lue found a place to share her concerns over Zamora Park last year within the Best Start El Monte/South El Monte Community Partnership, where she is a member. Together, they began work to improve the 5-acre park. In January of 2017, Lue and several members of the partnership visited the park to document the needs and opportunities for enhancement, taking photographs and talking to an El Monte Police officer who patrolled the park about his security recommendations. Partnership members also visited nearby Gibson Mariposa Park in El Monte to take photos of that park’s amenities for comparison to Zamora Park.

Meanwhile, the Best Start El Monte/South El Monte Community Partnership learned that the City of El Monte was already considering doing improvements at Zamora Park and was in the early stages of this process, eliciting community feedback and working with an architect on early designs. Sensing the opportunity to work with the city to enhance the park, the partnership decided to deliver their “wish list” for the park at the March El Monte City Council meeting.

For Lue, this would have been an impossible task not long ago.

“In Best Start, there are a lot of trainings about how we can have a voice in the community and how we become involved and elevate our voices, because sometimes we are afraid to do this.” -Yadira Lue

“I used to be embarrassed or shy,” she recalled. “In Best Start, there are a lot of trainings about how we can have a voice in the community and how we become involved and elevate our voices, because sometimes we are afraid to do this. Through those trainings, I became a little more relaxed and gained confidence to do public speaking.”

So when the day of the city council meeting came, Lue was there with her fellow Best Start partnership members and First 5 LA Community Relations Manager Fabiola Montiel to make their case for enhancing Zamora Park with a presentation full of research, photos, and numerous statistics. Among these:

Lue and her fellow partnership members also presented the city council with a wish list that included park cleanup and removal of damaged benches and tables. Bigger wishes included adding protective roofs and shelters for the kids’ play areas to protect them from the sun as well as the development of a “Splash Area” where local children can play in cool water during hot summer months.

Asked how she felt after her first experience speaking to her city council, Lue said simply: “It felt good.”

“They didn’t do a good job,” said El Monte Mayor Andre Quintero. “They did a great job.”

“They were very effective,” Quintero continued. “They had all their research done. They had pictures, graphics, and they were very measured in their requests. They were speaking on behalf of their children that they would like to have safe places for kids to play in. They were very determined to make an impact for the children of the community for that park.”

“Having Best Start help parents understand that their voices do matter helps our government be more effective and more responsive.” -Mayor Andre Quintero

The benefits of Best Start’s participation in the city council meeting go beyond just one park, he said.

“We can get a dry report from our staff, but when we hear from community members, it gives us a better perspective of their concerns,” Quintero said. “Having Best Start help parents understand that their voices do matter helps our government be more effective and more responsive.”

So effective was the presentation, in fact, the city asked the partnership to write a letter in support of a $5 million state grant application for the city’s proposed Zamora Park Renovation Project.

“Whenever you have community people who are organized and unified in one single voice advocating for something, that speaks to something in a different voice than just government does,” Quintero said of the partnership’s letter of support. “It lends a weight of credibility to our application. Funders get to see there are real people behind these services.”