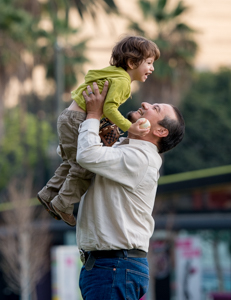 Rafael González’s current role as director of First 5 LA’s Best Start Communities has brought him back full circle to the single most important lesson of his youth: it’s all about community.

“It wasn’t so much a choice for me to go into social justice work – it was just automatic,” González explained. “The value of ‘giving back’ was modeled by my parents and in the Los Angeles neighborhood I grew up in. What I saw my parents do on an individual level is not that different from what I do now on a multi-communities level through the Best Start Communities effort.”

Growing up near downtown L.A. and coming from a family he describes as “low income with high hopes,” González remembers usually having enough for themselves, and sometimes enough to help others as well.

“It was hard for us and I’ll never forget the experience, but we knew that many other families around us had a harder situation than we did,” he recalled. “My parents were good people and exemplified community – that helping others is just what you do as a neighbor. And it was reciprocal: We shared food and clothes with families and at other times this was provided to us by others. This mindset was embedded in my growing years. It was always about community.”

“My parents were good people and exemplified community – that helping others is just what you do as a neighbor.” – Rafael González

Because of this ingrained sense of how a community functions, González feels that his work at First 5 LA has been much like coming home: “In my career, I’m often working in and with communities where I see myself, either because they are the very communities I grew up in, or very much like them.”

González describes two aspects of his work that inspire him daily.

“First, it’s an honor working with a passionate, committed team of individuals who care about the same things I care about. To be in a workplace that has purpose and conviction,” he explained.

“Second, I enjoy working with families and community leaders. Together we are partners, just as my family was in the communities where I grew up. My parents got together with others and did what they needed to do, working with what they had. Their support system was the community, which is still there and is an incredibly valuable resource to parents. But there are other more formal support systems, those from governments or non-profit groups, that some people in the community don’t know exist or don’t know how access. Through the work we do within the 14 communities we partner with – with folks who care about the issues and take it upon to themselves to act on them – I feel I’m continuing what my parents did but on a larger scale.”

When not engaging in First 5 LA work, González and his wife enjoy putting together music sessions in their home with as many as 10 families participating, singing, dancing and playing a variety of musical instruments.

“As a kid, I was into music and dreamed of playing in a rock ‘n’ roll band,” he recalled. “Music was, at times, my salvation, keeping me focused, inspired and motivated. When you grow up in a rough neighborhood like I did, you have to find something positive you connect to and, for me, it was music.”

At age 15, Rafael realized his rock ‘n’ roll dreams, performing as a singer with a band in clubs: “It gave me a good sense of myself and what I could achieve. And it’s still important to me. The music sessions we organize at home today, intertwined with love for community, model to our sons.”