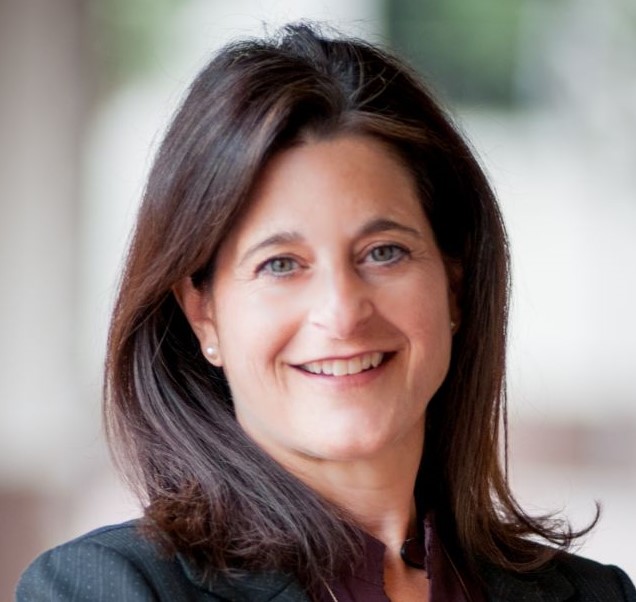 Yes, 8th grade can be a challenging time for a teenager. Christina Altmayer faced all these tests growing up on New York’s Long Island. And then, tragically, another challenge literally landed on her doorstep.

“My mom’s sister died of cancer,” Altmayer recalled. “And then her husband – my uncle – had died in a car accident. My mom said, ‘I have to take care of my sister’s children.’ I was one of six kids and suddenly we had nine kids in the house.”

It was a tight situation – both in terms of living space and financially – but Altmayer’s parents did the best they could to support the addition of her three cousins. Her father taught philosophy at St. John’s University in New York City. Her mother not only provided a home cooked meal on the table every day, she worked a number of part-time jobs and went back to college to obtain a bachelor’s degree in history and master’s degree in political science. Ultimately, she became a high school and college teacher.

“My mother was extremely compassionate about children. She taught me that people – including parents – do not have to be perfect.” - Christina Altmayer

If she had a champion for children growing up, Altmayer said, it was her mother.

“My mother was extremely compassionate about children,” Altmayer recalled. “She taught me that people – including parents – do not have to be perfect.”

Her mother’s values of compassion, dedication to children, education and hard work served to inspire Altmayer: “I was always interested in government, politics, and public service.”

These feelings were reinforced during a college internship one summer in the Appalachian Mountains, where she gained a new perspective on the depths of poverty others endured. She also got to know a teenage girl in a wheelchair who was so incapacitated that she had to feed her lunch.

“I was so overwhelmed by the degree and pervasiveness of need,” Altmayer recalled. “I couldn’t believe that those were conditions people lived in every day.”

And so began her path of public service. 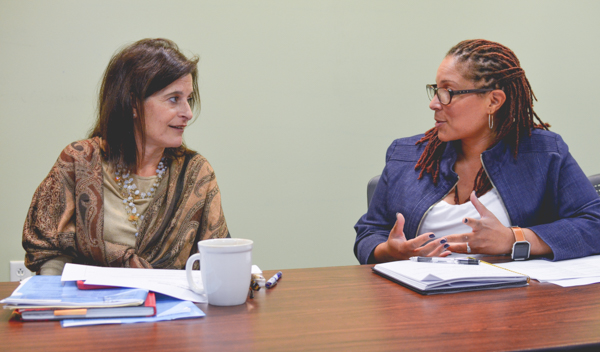 Altmayer started by earning a Bachelor of Arts in Government and Politics, and later, a Master of Arts in Public Administration from St. John’s University in New York. Her career path led her to work with the state legislature in New York, then to Los Angeles as a senior manager of consulting with Ernst and Young. Afterwards, she began and became President of Altmayer Consulting, which specialized in management consulting to public and nonprofit agencies.

Her consulting practice led her to work with numerous Children and Families Commissions throughout California, including First 5 LA, as well as the County of Los Angeles, on long term financial planning, strategy development, program design and implementation, and evaluation.

“Christina is a champion for children and families and has demonstrated this by her strategic thinking, creativity and vision for the future,” said Philip L. Browning, a First 5 LA Commissioner and Director of the Los Angeles County Department of Children and Family Services. “She listens to diverse opinions, is very approachable and a consensus builder, which exemplifies the traits of a progressive leader.”

In her consulting practice, Altmayer also spent 12 years as Project Director for the Pediatric Health Services (PHS) Program for the Orange County Children and Families Commission, where she took the reins as Executive Director in 2013.

“She is a strong collaborator and worked tirelessly with community advocates to ensure the provision of health and education services to this population.” - Dr. Maria Minon

During her tenure at the Orange County Children and Families Commission, Altmayer successfully led the organization through a comprehensive strategic planning and then implementation process while overseeing a program funding portfolio of $35 million. In this capacity, Altmayer has helped lead several high impact efforts, including initiatives related to developmental screening and early intervention, kindergarten readiness, and oral health.

With a more rapid decline in tobacco tax revenues affecting the OC Commission than at First 5 LA, Altmayer also found herself faced with the question of how to sustain the future of the agency. In response, she spearheaded a tailored approach to sustainability: examining the sustainability of each of the Commission’s initiatives; collaborating with county agencies and other partners; acquiring “Pay for Success” grants; funding infrastructure improvements at community clinics to qualify them for federal dollars; and promoting advocacy efforts.

“My biggest lesson from Orange County was that we have both a mandate and an invaluable opportunity to make our programs sustainable,” Altmayer said.

Altmayer’s leadership drew praise from Orange County Health Care Agency Director Mark Refowitz, who also serves on the Board of the OC Commission.

“While serving as the Executive Director of the Orange County Children and Families Commission, her passion for championing the needs of children and families was evident in all that she did,” Refowitz said of Altmayer. “Her strategy and pure talent have made her a national leader in improving performance outcomes for programs serving children.”

That sentiment was echoed by Dr. Maria Minon, who serves as Vice President of Medical Affairs and Chief Medical Officer at Children’s Hospital of Orange County.

“It was my pleasure to work closely with Christina Altmayer while I served as Chair of the Children & Families Commission of Orange County,” Minon said. “Christina is passionate about helping young children and their families thrive. She is a strong collaborator and worked tirelessly with community advocates to ensure the provision of health and education services to this population.” 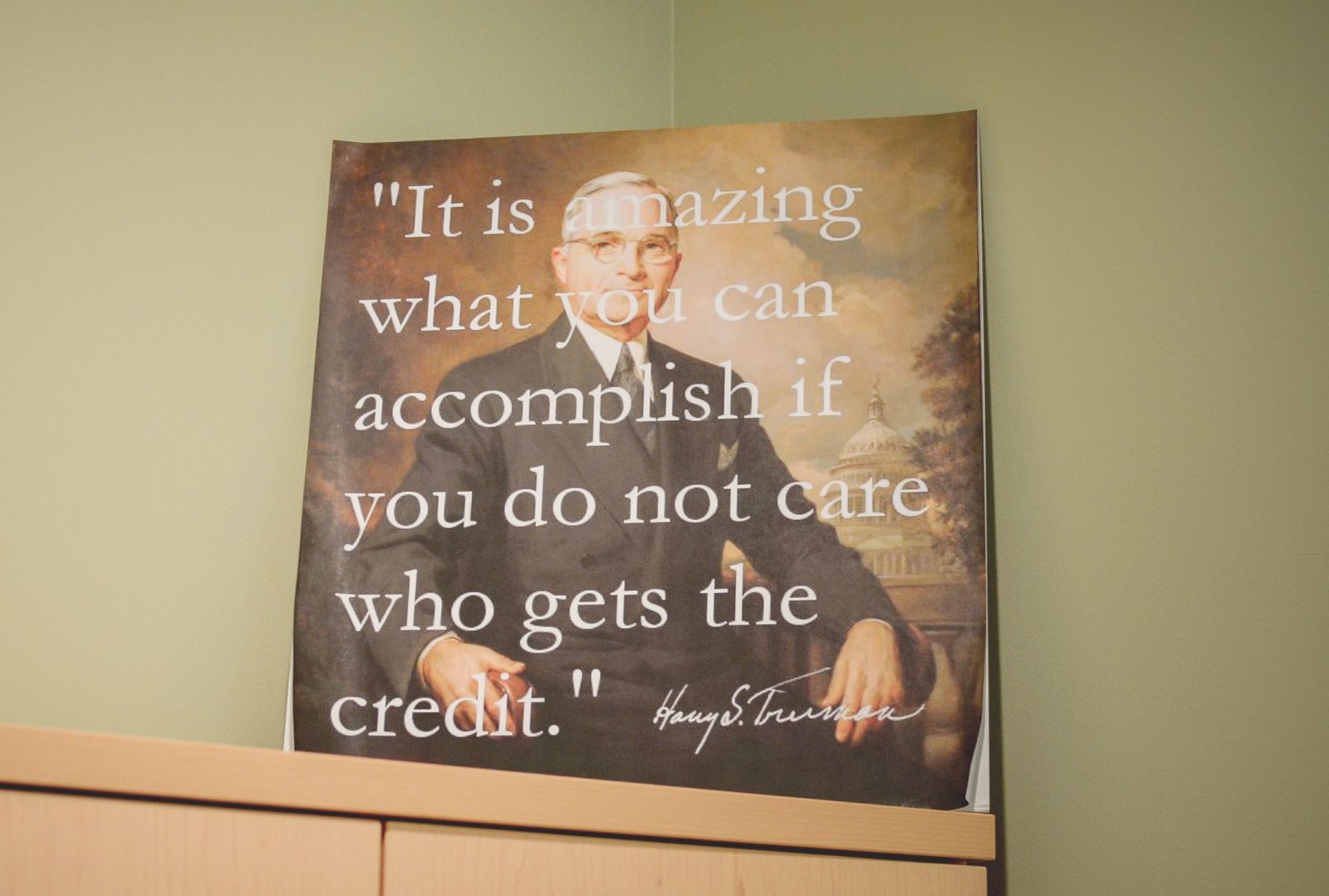 Yet Altmayer is not one to boast of her accomplishments. Anyone can see that just by glancing above her desk in her new office at First 5 LA, where hangs a portrait of President Harry S. Truman and his quote: “It’s amazing what you can accomplish if you do not care who gets the credit.”

Asked about it, Altmayer simply smiles: a gesture both warm and humble. “It just really defines my philosophy about work. When you are in consulting, you don’t get the credit. You are working to make your clients be successful. When you have that attitude, you get so much more done. I just want to get things done.”

As the new Vice President of Programs at First 5 LA, among the first items on that “to do” list for year one includes implementing and supporting the agency’s organizational alignment.

“I think there are incredibly talented and smart people here and I’m excited about building a team aligned around a common purpose,” she said. “Another reason I’m excited to be at First 5 LA is to be working with such a diverse staff. I’ve really enjoyed getting to know so many different people with so many different backgrounds and perspectives.”

Occasionally, Altmayer thinks about the tragedies that orphaned her cousins.

“There but for the grace of God,” she said. “Growing up, I feel a lot of things broke my way. I know I am fortunate to be where I am today because so many people supported my career and mentored me.”

Ultimately, this has impacted her desire to improve the lives of other children.

“I feel very strongly that we have to nurture opportunities for kids,” she said. “I really want to ensure that where they grow up doesn’t define the trajectory for the rest of their lives.”

Wouldn’t that make a mother proud?