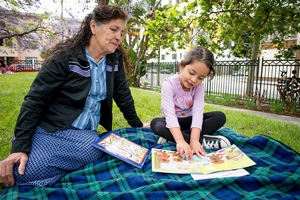 Here’s the latest news, research and other items of interest that we’re reading to inform our view of the issues affecting parents and children from the prenatal stage to age 5:

LET’S START WITH A LITTLE LEVITY

The comic strip Candorville is one of the few that actually features a father of a young 2-year-old child. Strip creator Darrin Bell tackles parenting topics ranging from child care concerns to controversial issues ripped straight from the headlines. It’s rare that a strip makes you think and laugh about parenting at the same time.

Following the release of disturbing cell phone videos of a Montessori school teacher and an aide aggressively manhandling two toddlers, a New Jersey lawmaker is writing a bill to require background checks for private school teachers.

According to this report by Marc Santia of NBC News New York, Assemblyman Carmelo G. Garcia was shocked by the two videos shot last month in his district of Hoboken. According to the report:

“One video shows an aide manhandling a 23-month-old girl as she attempts to put a hat on the child; the other shows a teacher grabbing a crying child by her feet, then yanking the toddler around.

‘I couldn’t believe a teacher would do that to a child,’ Garcia said. ‘We have to protect those children as well as the parents of those children, who deserve to know that those teaching their children are qualified and are keeping them safe.’

“I ripped it out of his hands and said, ‘You can’t answer that, it’s none of their business.’ This is kindergarten and they want to know about my vagina! I don’t understand – there’s no correlation between the two for me.” – Cara Paiuk

Garcia said his draft would bring requirements in line with public schools and charter schools in the Garden State.”

As for those involved in the incidents, NBC News New York reported:

“Apple Montessori, which runs 17 schools New Jersey, fired five employees after the videos were released. Among the terminated employees included both the teachers seen in the videos and the director and the assistant director of the Hoboken school.”

According to the largest study of its kind, the odds of having a child with autism appear to go up and down as moms and dads move through life.

Writer Shaun Heasley explains the study’s results in this article in Disability Scoop:

“In an analysis looking at more than 5.7 million children in five countries around the world, researchers found an increased likelihood of autism in kids with older parents, those born to teenage mothers and in circumstances where there is a large age gap between a child’s mother and father.

“Though we’ve seen research on autism and parental age before, this study is like no other,” said Michael Rosanoff, director of public health research at Autism Speaks and a co-author of the study published online Tuesday in the journal Molecular Psychiatry.”

Despite these findings, Heasley writes:

“…researchers said it is important to note that most children are typically developing regardless of the ages of their parents.”

Parents around the nation are filling out applications to get their kids into kindergarten, but one question went just a little too far for a Connecticut mom.

According to this article by Rachel Bertsche in Yahoo Parenting, Cara Paiuk’s husband was answering questions on a kindergarten application form for her son at Aiken Elementary School in West Hartford, when she noticed one particularly alarming question asking whether her son was delivered vaginally or via C-section.

“I ripped it out of his hands and said, ‘You can’t answer that, it’s none of their business,’” Paiuk told Yahoo Parenting. “This is kindergarten and they want to know about my vagina! I don’t understand – there’s no correlation between the two for me.”

“I asked how birthing methods would be relevant, and she responded that a cord wrapped around the neck depriving a child of oxygen or fetal distress could lead to developmental problems. That seemed both far-fetched and inadequate to me. If adverse birth events are the underlying concern, why not ask about them? Birth trauma can occur regardless of delivery type. And why not ask about other possible medical explanations for kindergarten challenges? Shouldn’t they, I asked, include the question about whether a child is vegan so a teacher can look for vitamin deficiencies? ‘We don’t like to ask questions about food,’ she said. ‘Parents are very sensitive to that.’ But questions about our vaginas are A-OK!”

After speaking with the school superintendent about the issue, Paiuk told Yahoo Parenting that she’s been assured that administrators are reviewing the forms and will be issuing a revised version next spring. And while she still refuses to fill out the form, her son will be attending kindergarten at Aiken Elementary in the fall.