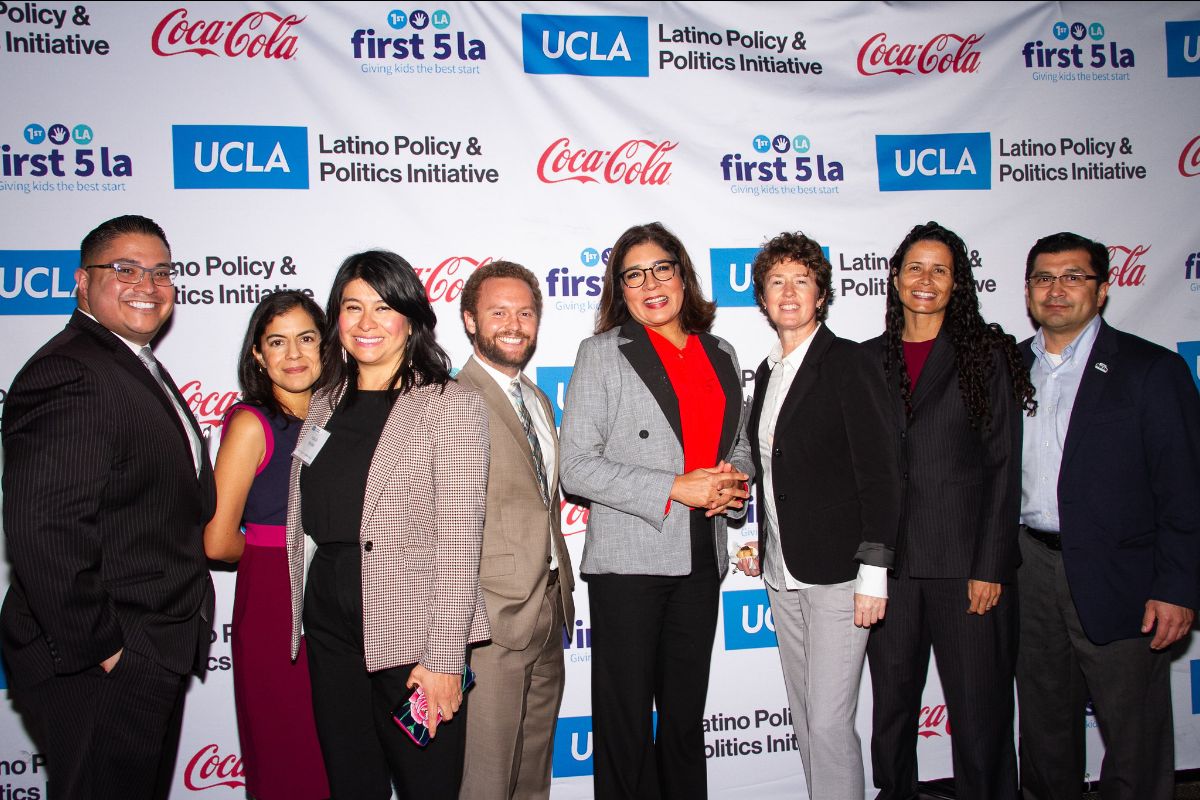 Latina Leaders: Colleagues from the Policy and Strategy Division attended Latina State Senators Reshaping National Politics from the Southwest, a community forum featuring several newly elected Latina southwest state senators including California Senator Maria Elena Durazo (D-Los Angeles), who is the current Vice-Chair of the California Latino Legislative Caucus and a member of the Senate Appropriations Committee. The goal of the forum, held at La Plaza, was to discuss the role each of the senators plays in influencing policy in their respective states heading into the 2020 election cycle. Panel topics included early childhood development, public charge and the census. Attendees included leaders from government, philanthropic, business and academic sectors. First 5 LA was a primary sponsor of the event. Click here for the full video of the panel discussion. 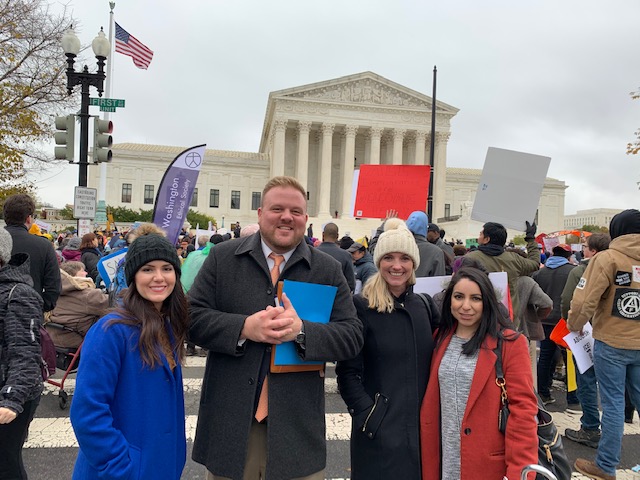 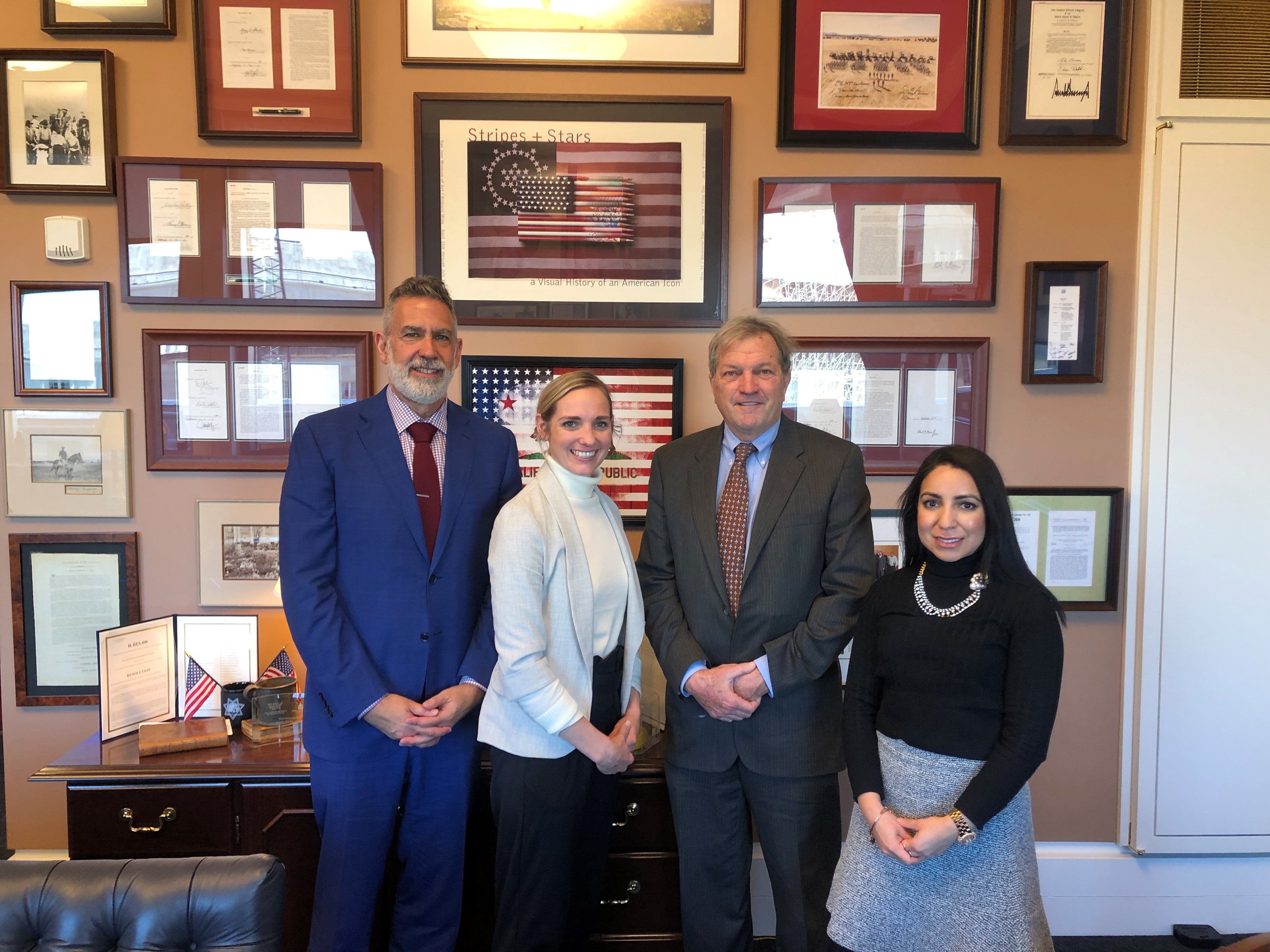 On The Hill: First 5 LA Director of Public Policy & Government Affairs Peter Barth and Government Affairs Strategist Anais Duran participated in the annual Washington, D.C. Advocacy Trip for First 5s across the state, including First 5 California and the First 5 Association. Representatives from the First 5 network traveled to the nation’s capital to advocate for priority early childhood development issues and build partnerships with national early childhood development policy and advocacy organizations. This year the trip included an intimate breakfast with national partners and a series of meetings with federal lawmakers and their staff — including member meetings with Rep. Nanette Barragán (D-Los Angeles) and Rep. Judy Chu (D-Monterey Park) from the Los Angeles Delegation and Rep. Mark DeSaulnier (D-Walnut Creek) who is a former First 5 Commissioner and an early childhood champion. 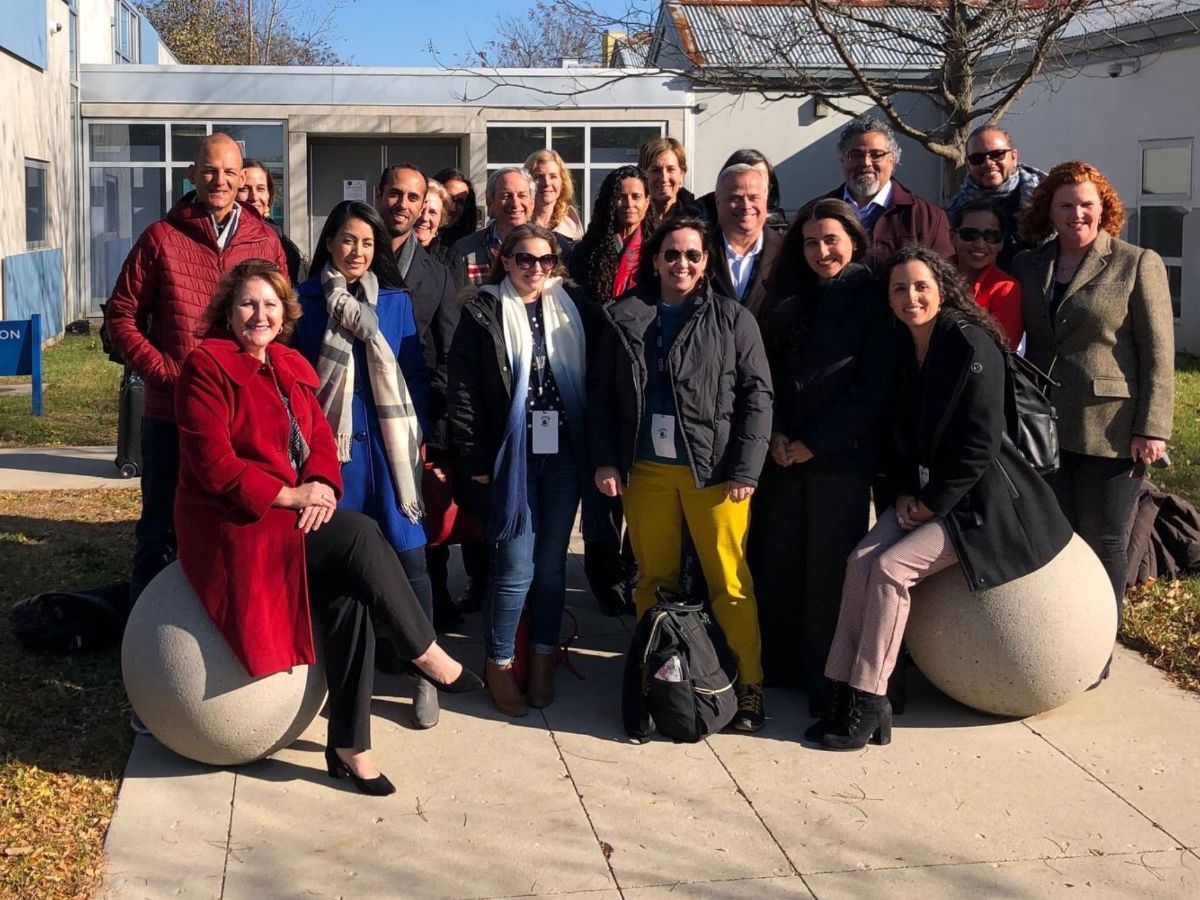 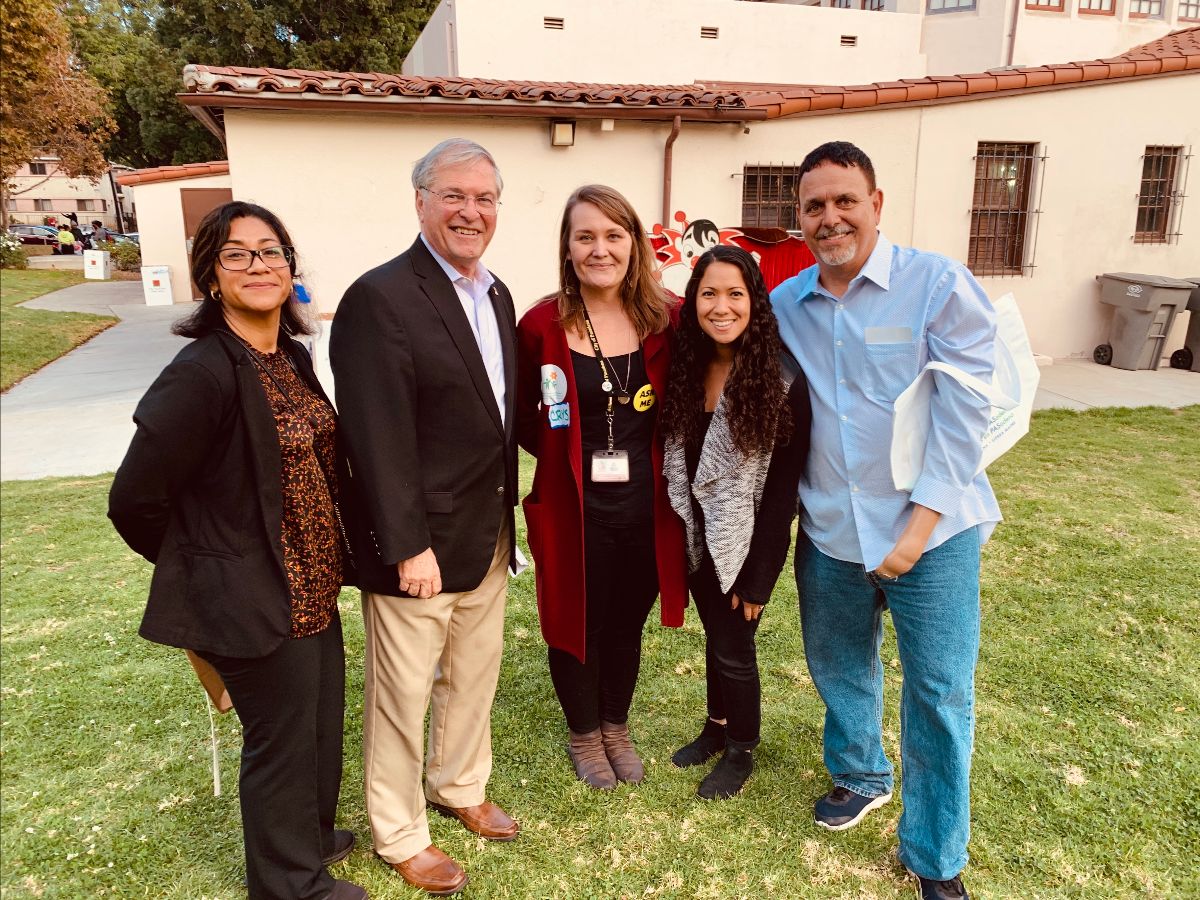 Growing Together: The City of Pasadena celebrated the launch of Growing Together PASadena's Early Childhood Hub Network funded in part by First 5 LA. Growing Together PASadena is a network of parents, caregivers, service providers and early childhood advocates that fosters the development of children prenatal to age 5 and supports families with tools and resources to thrive. The Hub Network sites will offer parent and caregiver classes, family learning activities, referrals to services and more. Click here for a short video about the sites. Community Relations Officer Bill Gould and Family Supports Program Officer Avery Seretan attended the event and shared their thoughts:

"I'm a long time resident of the community who is committed to the improvement of children’s lives. As such, it is nice to see progress. We have a long way to go to become 'an early learning city' but establishing hubs for young children and their families is a positive step in the right direction!" - Bill Gould

"Attending the Growing Together PASadena hub launch was a great experience! It was amazing to see all the booths and child friendly activities that matched the specific Early Development Instrument (EDI) domains. There was even an interactive puppet show and drum circle. It's nice to see the city come together to highlight the importance of supporting the healthy growth and development of young children in Pasadena." - Avery Seretan 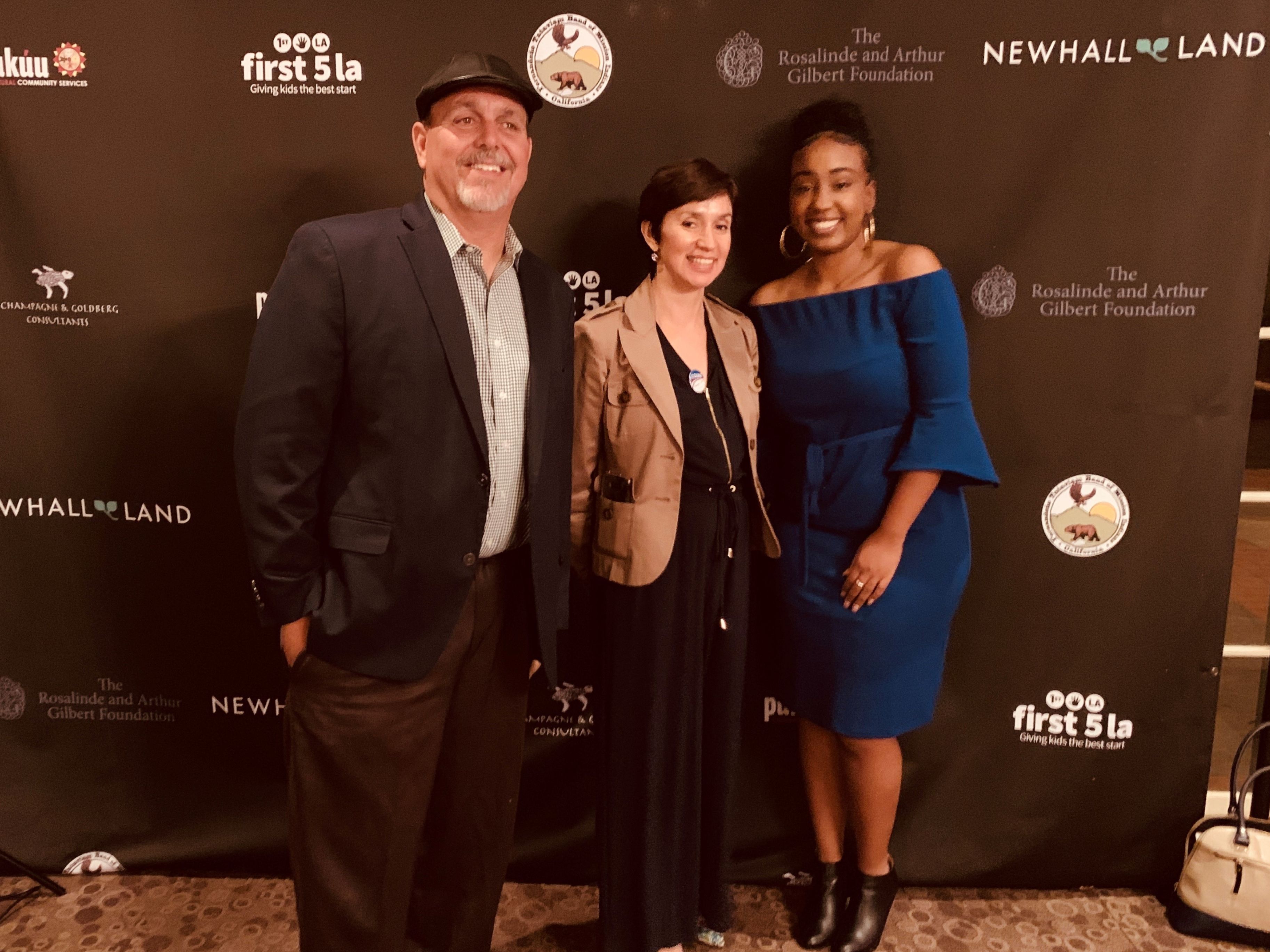 Night with the Stars: Colleagues in the Community Relations and Communities Department attended the Pukúu Cultural Community Services fundraising gala Night with the Stars, held at The Odyssey in Granada Hills. Pukúu is a nonprofit organization founded by the Fernandeño Tataviam Band of Mission Indians in Northern Los Angeles County; their mission is to invest in sustainable programs that bridge and improve opportunities for American Indians with culturally-based community services now and for future generations. The annual Night with the Stars event acknowledges tribal, community, civic and artistic leaders who proactively address and continue to advocate for crucial initiatives. This year's honorees included Chrissie Castro (Navajo), Jacque Nunez (Acjacheman) and Andrew Masiel Sr, (Luiseno). Community Relations Officer Bill Gould shares his thoughts about the event: "I find it extremely important that First 5 LA engages with organizations such as Pukúu, a community-based American-Indian organization motivated to strengthen family and youth continuity. At this gala, I was particularly struck by the award given to Chrissie Castro -- a citizen of the Navajo Nation, and a social justice change agent, who works on national and international issues of equity.” 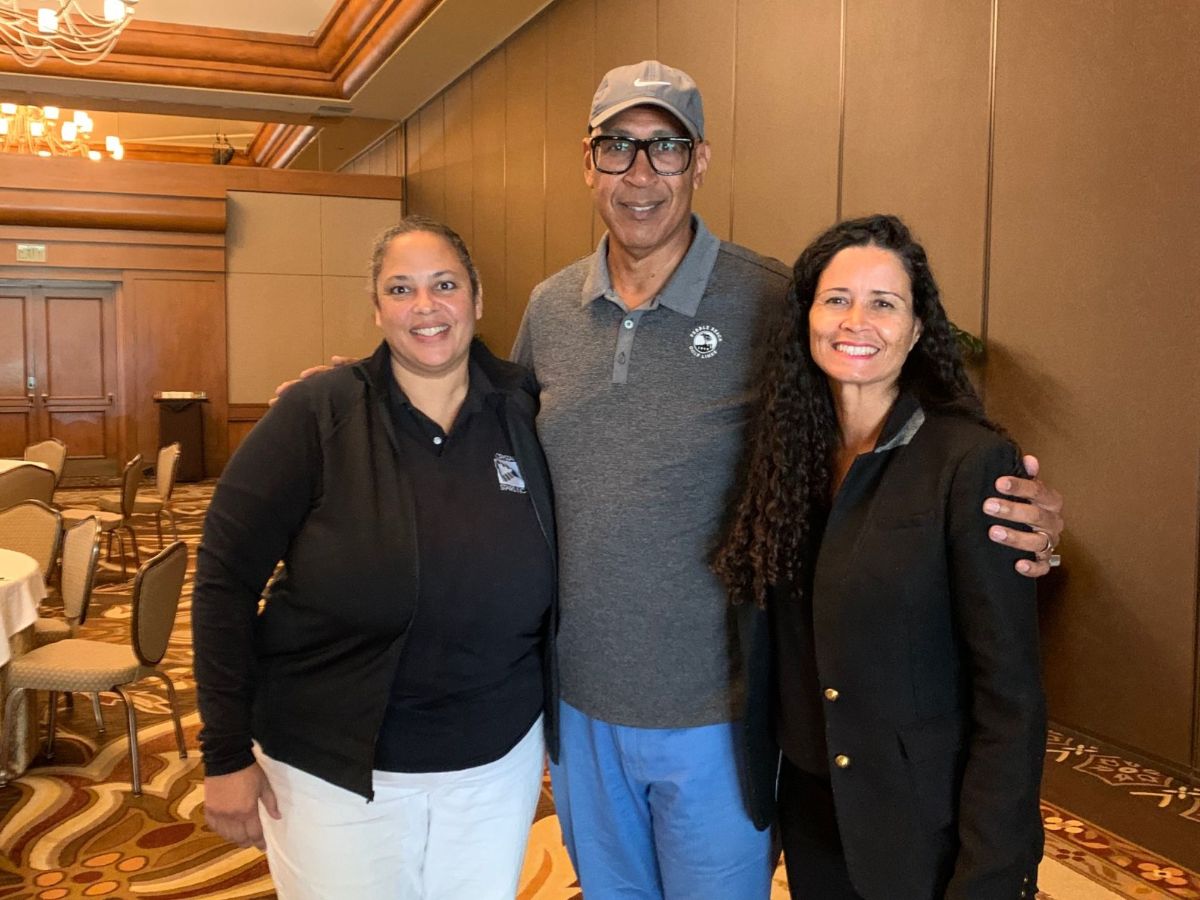 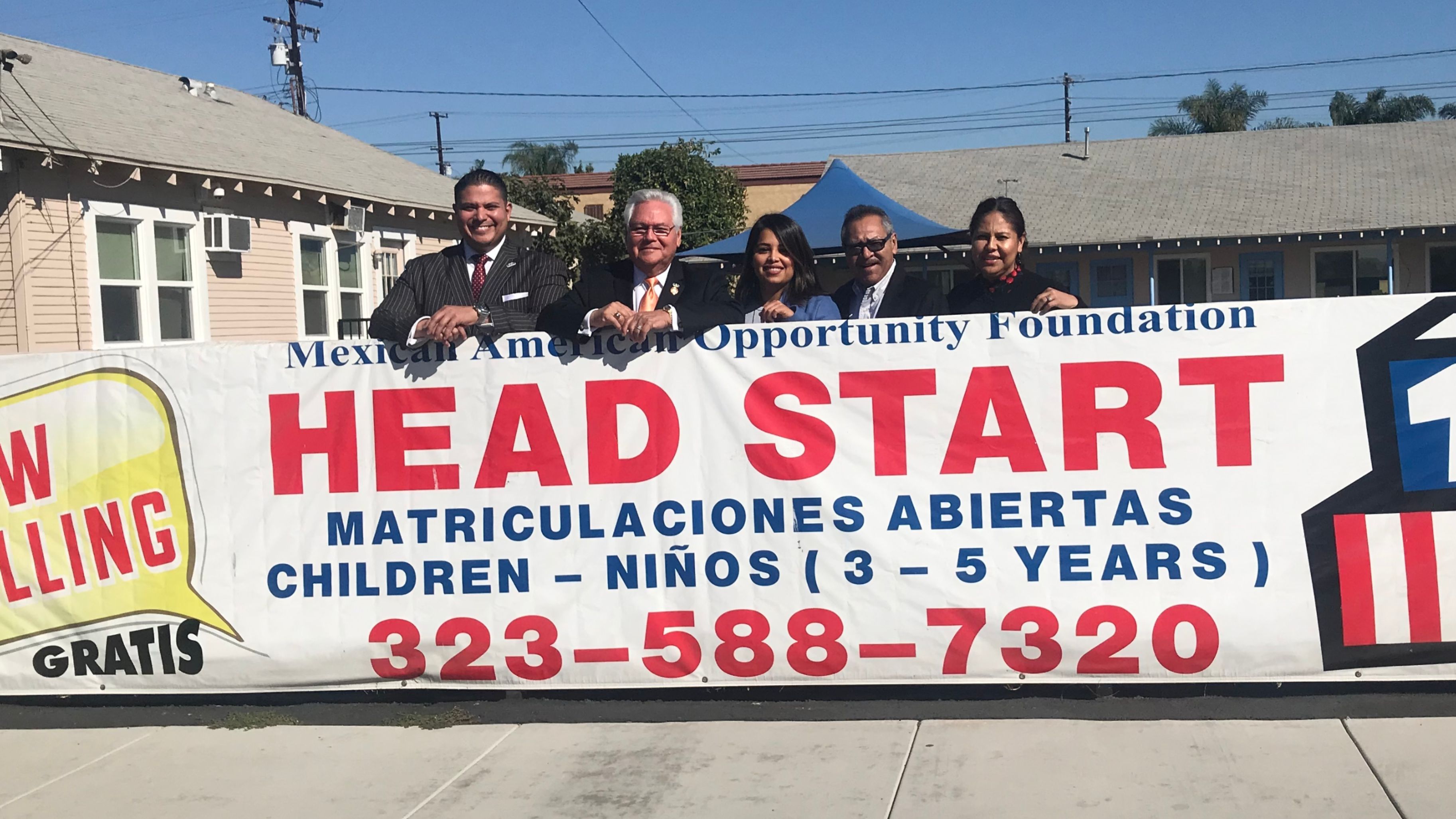 Early Ed Visit: Senior Government Affairs Strategist Jamie Zamora recently attended an early learning site visit with Senator Bob Archuleta (D-Pico Rivera) at a Mexican American Opportunity Fund (MAOF) child care center in the City of Pico Rivera. The visit, hosted by the California Alternative Payment Program Association (CAPPA) and the Child Care Alliance of LA in the City of Pico Rivera, provided Archuleta with the opportunity to understand the importance of early learning for children prenatal to age 5. Elected in 2018, the senator is the grandfather of 10, including two 3-year-olds. As a result, he is very interested in championing early care and education in the State Senate and as a member of the California Latino Legislative Caucus. He represents the communities of Artesia, Bellflower, Buena Park, Cerritos, Commerce, Downey, Hacienda Heights, La Habra Heights, La Mirada, Lakewood, Montebello, Norwalk, Pico Rivera, Santa Fe Springs, South Whittier and Whittier. 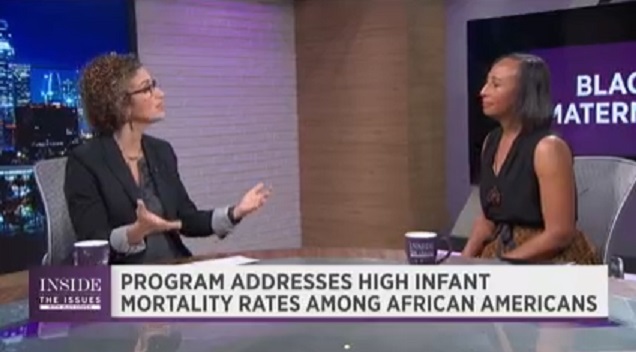 Spectrum 1: First 5 LA Pritzker Fellow Melissa Franklin was recently interviewed on the Spectrum 1 program Inside the Issues with Alex Cohen about First 5 LA and the L.A. County Department of Public Health's work around black infant and maternal health. Melissa started with First 5 LA in the fall of last year, and has since built a strong coalition of leaders in L.A. County to tackle the issues of institutional racism and stress that are known to be causal factors in the unacceptably high rates of black infant and maternal death. Learn more about the coalition's work here. Cohen explored several topics with Melissa, including her work with the County and Senator Holly Mitchell's (D-Los Angeles) recent bill, the Dignity in Pregnancy and Childbirth Act. Click here or on the image above to view the full interview. 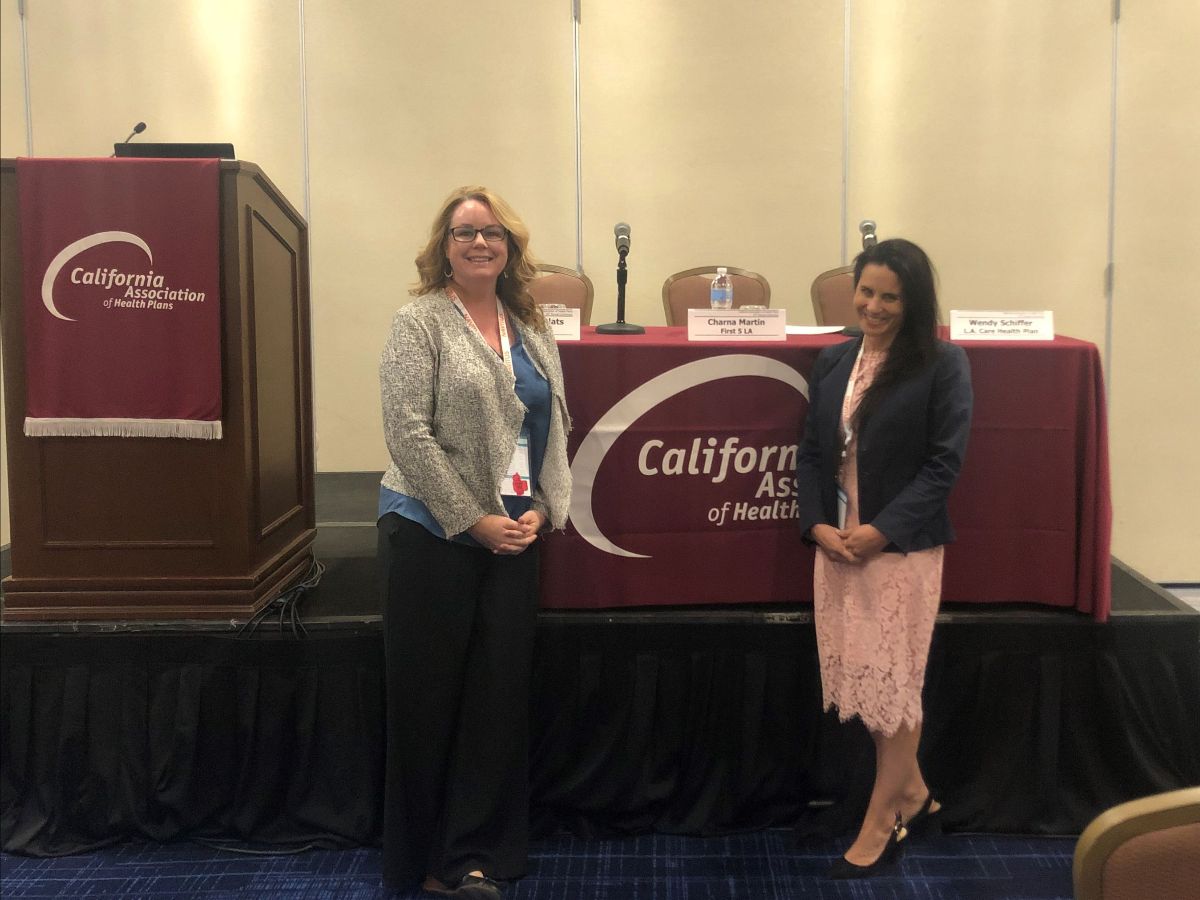 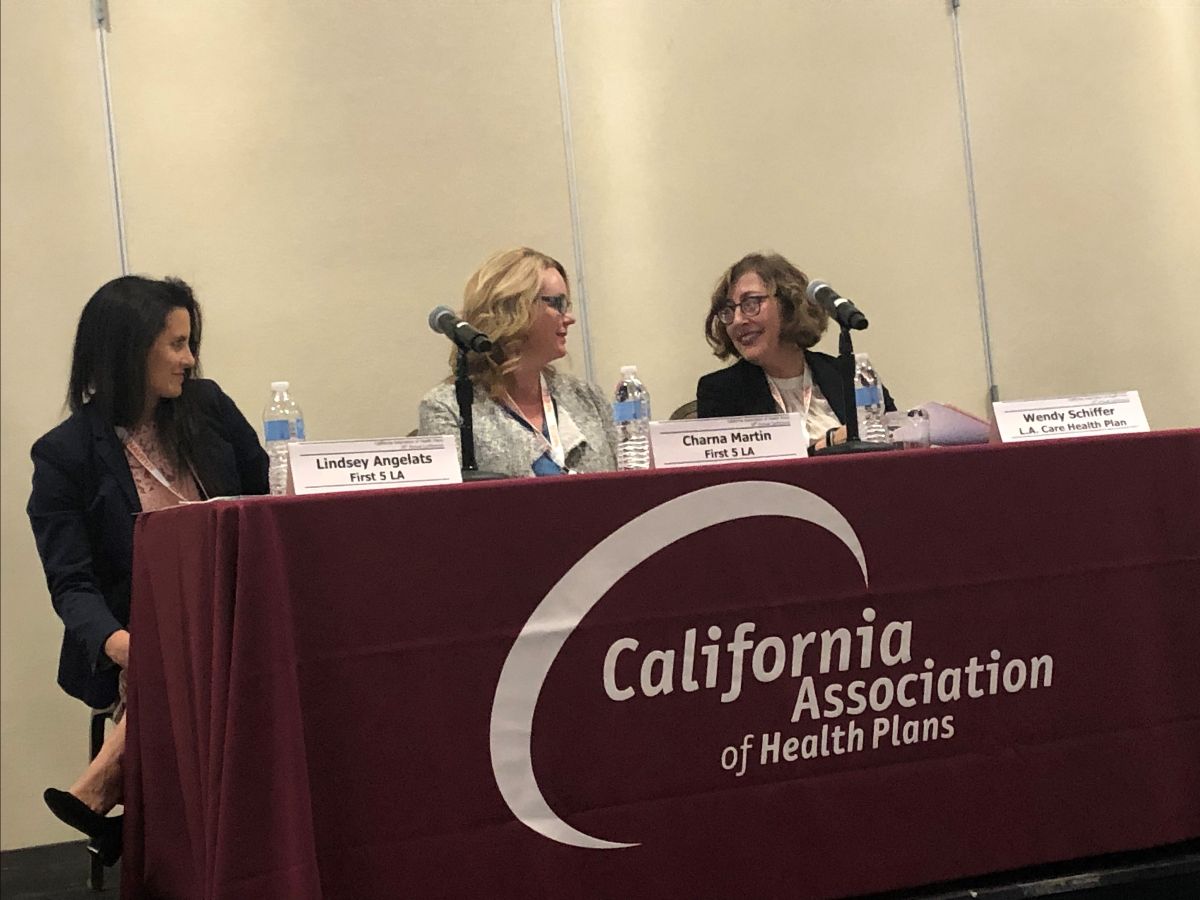 Making Inroads: First 5 LA Senior Policy Strategist Charna Widby and Senior Strategic Advisor Lindsey Angelats presented at the California Association of Health Plans’ three-day Annual Conference in Palm Desert, which welcomed over 1,000 health care professionals. The two presented alongside the Senior Director of Strategic Planning at L.A. Care Health Plan Wendy Schiffer, focusing on pediatric screening and preventative services. Lindsey and Charna illuminated the importance of developmental screenings and touted the passage of AB 1004, First 5 LA's first co-sponsored bill which was just recently signed into law. The only presenters on pediatric health at the conference, Charna and Lindsey were approached by several health leaders seeking guidance and thought partnership on how to better support young children. 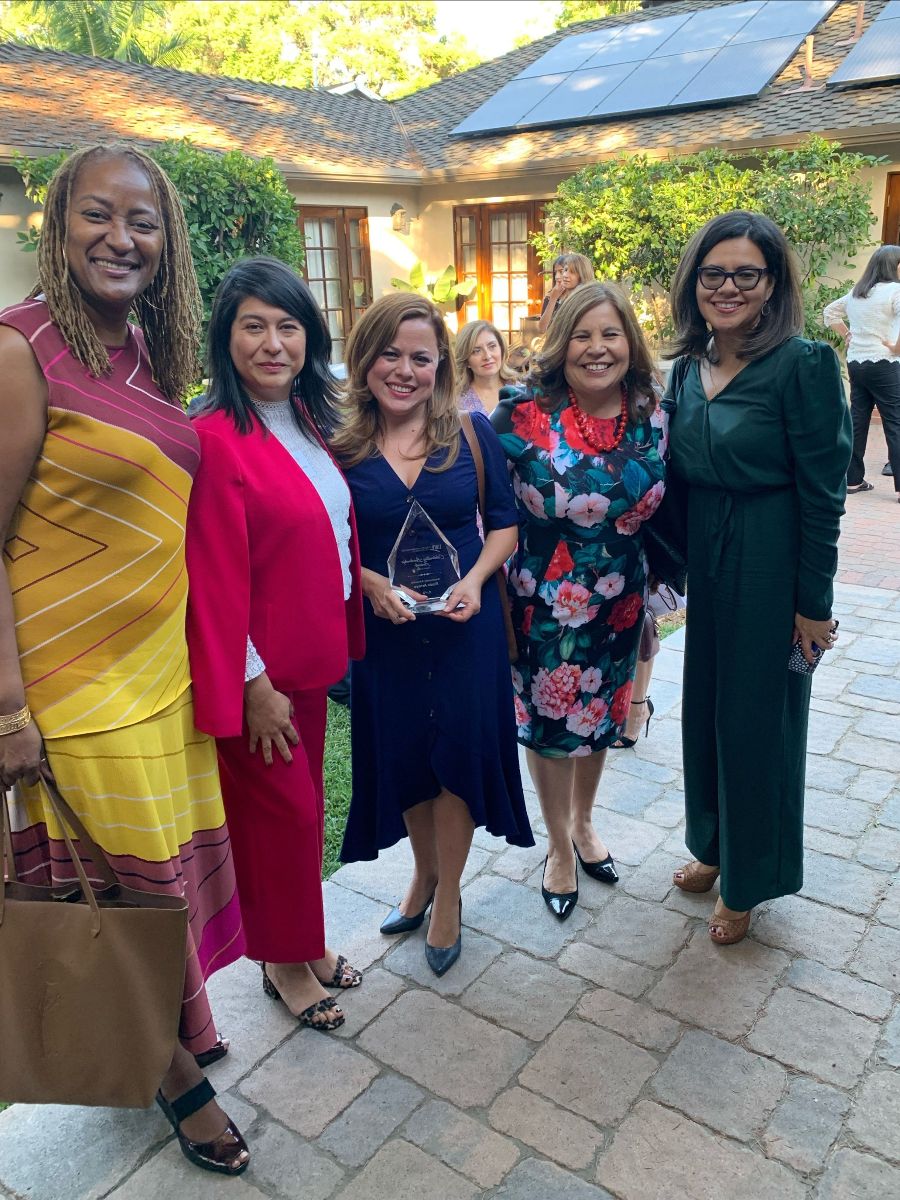 Celebrating Women Voters: Community Relations Manager Fabiola Montiel joined Senator Holly Mitchell (D-Los Angeles) and other California leaders for the League of Women Voters of Los Angeles' Celebrating Leadership Awards. The garden reception, held at a private residence in Sherman Oaks, hosted honorees Rep. Karen Bass (D-Los Angeles), California Community Foundation Senior Program Officer Rosie Arroyo and "League Legacy" Carryl Carter. When receiving her award, Bass shared that, "even for elected officials, it's still important to hear from their constituents whether it's state or federal because democracy is more than voting. It's something we participate in every day." Fabiola also shared her reflections on the event and the profundity of the League's 100 years for work: "Before I left for the event, I told my daughter where I was going and why. The next day she explained to my husband that it's important that women vote -- because they couldn't always! I was moved by her young yet powerful perspective."