Success Story: Home Is Where the Heart Is

As a young child, Shaquan Wilson was separated from her mother and sent to live in a string of foster homes that shattered her sense of security. Nearly two decades later, a tearful separation was happening again – but this time to Wilson and her 1-year-old daughter, Ariayah.

Evicted from her North Hollywood apartment last summer, Wilson, 21, became homeless — forced to live in her car while her infant daughter was sent to be with her father.

“Just not knowing what was going to happen next and not having my daughter with me was nerve-racking,” Wilson recalls. “Ever since I had her, she’s been like my rock.”

But Wilson was far from helpless. She dialed 2-1-1, the countywide referral service funded in part by First 5 LA, and was connected to the Los Angeles House of Ruth, where she learned of a new housing facility being built for homeless families with young children. Following an application process – during which time she and her daughter were reunited at Wilson’s grandmother’s home – the pair were welcomed last fall to their new home: a one-bedroom apartment at Whittier Place in Los Angeles.

“This program is a lifesaver,” Wilson said. “My biggest thing is my daughter. Being able to have a roof over her head and clothes on her back is a blessing.”

Constructed with funding from First 5 LA’s $35 million, five-year Homeless Permanent Supportive Housing Initiative (PSH), Whittier Place is the second of five housing facilities to be constructed between 2014 and 2017. So far, more than 1,400 formerly homeless families in Los Angeles County have been housed by the initiative, which is comprised of housing construction and rental assistance and complemented by supportive services such as child care, job outplacement, homework support for kids, financial literacy and referrals to medical facilities.

"My biggest thing is my daughter. Being able to have a roof over her head and clothes on her back is a blessing" - Shaquan Wilson

“I’m going to take advantage of as many services as I can,” Wilson said. “This includes money management, trying to get a new job, child care for my daughter and going to school.”

“By having that housing stabilization, parents and children are more receptive to things like health care and education that may be needed by the family,” Jenkins said. “Without housing, these families are just in survival mode.”

“One of the things that both the city and the county are working at, is that when you are developing permanent supportive housing, that services are there,” echoed Pansy Yee, manager of housing development for the Community Development Commission. “Those three things under one roof are so important: rent subsidies, supportive services and the housing facility itself.” 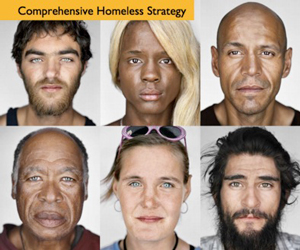 Recently, city, county and state officials have announced strategies to address homelessness in the state and in the area surrounding Los Angeles. From 2013 to 2015 alone, the county’s homeless count has grown by 12 percent to 44,000 persons, including families and young children.

Both the county and city strategies address how best to spend the $100 million pledged last year by each government entity to address homelessness issues. Set to be voted on in February, the plans are both coordinated and comprehensive. Some components of the two plans would help homeless families, including rapid rehousing and homeless prevention. The county would also provide continued funding through the budget year of the rental assistance program currently funded by First 5 LA that is slated to conclude in March.

“We are excited to have been on the forefront of a coordinated effort to house homeless families in L.A. County,” said First 5 LA Program Officer Sharon Murphy.

"We are excited to have been on the forefront of a coordinated effort to house homeless families in L.A. County" - Sharon Murphy

First 5 LA’s mission is, in partnership with others, to strengthen families, communities, and our systems of services and supports so all children in L.A. County enter kindergarten ready to succeed in school and life. First 5 LA’s PSH Initiative is one way the agency is leveraging its investment to spur a broader, sustainable solution to address homelessness among families with young children in L.A. County.

Last year, First 5 LA and Harder + Company Community Research conducted a nine month evaluation of First 5 LA’s PSH Initiative. The evaluation found that agencies that collaborated with and leveraged resources with other agencies, or had strong internal networks to which they could refer clients, reported stronger outcomes for their clients.

“We know so much more now about the strategies that work that we can share with policymakers,” continued Murphy. “It’s gratifying to see L.A. County and city leaders planning sustainable strategies together to greatly bolster our collective investment and help give Los Angeles County’s youngest residents opportunities to reach their full potential.”

Wilson could not agree more. After spending years as a child not knowing who would care for her or where she would live next, she is grateful that her daughter will not have to go through the same.

“I’ve been through so much stuff, it can wear and tear on you,” Wilson recalled. “Just being able to have a place of our own is so great. I’m happy. She’s happy.”