Speaking Up for Children on Capitol Hill 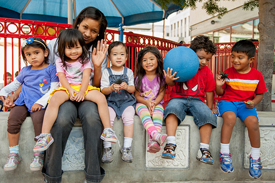 First 5 LA is off to a strong start in its efforts to advocate for young children in our nation's capital.

Buoyed by the public policy advocacy efforts of The Raben Group - with which First 5 LA contracted in July 2013 - much has been accomplished to further the agency's federal policy agenda that focuses on the sustainability of early childhood education and home visitation.

"The Raben Group has helped First 5 LA have a strong start in D.C.," Charnofsky said. "In this first year, in addition to introducing us to D.C. legislators and policy advocacy leaders, they have facilitated efforts by our policy team and our partners in the early childhood education field to submit joint comments and letters on proposed bills and regulations, and they have supported critical measures to reauthorize home visiting legislation."

First 5 LA and The Raben Group were able to help obtain the support of 29 California lawmakers in the U.S. House of Representatives.

Working with dozens of other early childhood advocacy leaders in California, First 5 LA and The Raben Group were able to help obtain the support of 29 California lawmakers in the U.S. House of Representatives for the Strong Start for America's Children Act of 2013. The legislation, sponsored by Senator Tom Harkin (D-IA) and Representatives George Miller (D-CA) and Richard Hanna (R-NY), is a bold, innovative, 10-year federal-state partnership that would expand and improve early learning opportunities for children across the 0-5 continuum. The bill currently is being considered by both the House and the Senate.

A key mission for the first year was to build First 5 LA's brand among Washington advocates and policy makers to introduce them to First 5 LA and to identify mutual policy goals and opportunities for collaboration.

According to Belshé, an important story that the trio endeavored to tell in D.C. was that of First 5 LA's declining revenue and need to strengthen partnerships and identify public sources of funding for critical programs that cannot be sustained by First 5 LA alone. In practically every meeting, the trio learned that the D.C. community has been closely following California's actions on early education in this year's state budget. All perceived the advances in California on ECE to be a significant win.

In another reminder for Washington legislators to make early childhood education a top priority, a national poll released earlier this month reveals strong bipartisan support for federal action on early education. The poll by the First Five Years Fund finds that 71 percent of voters - including 60 percent of Republicans - support greater federal investments in early childhood education.

Importantly, these same voters are willing for Congress and President Obama to spend now in order to capitalize on the economic return on investment from early childhood education, as documented by Nobel Prize-winning economist Professor James Heckman.

Seven in 10 Americans also support a proposal that would increase federal investment to help states provide more access to high-quality early childhood programs for low- and moderate-income families, according to the poll.

To read reaction from First 5 LA and other early learning advocacy leaders on the new poll, click here.