First 5 LA’s Board of Commissioners convened on September 9 for its first meeting following a two-month summer recess. During the meeting, members reviewed an update to the agency’s procurement policy, considered a promising Strategic Partnership that would help First 5 LA advance quality early learning and care in Los Angeles County, and decided on a temporary venue for in-person board meetings. 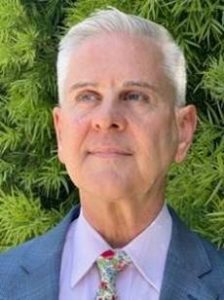 L.A. County Board Supervisor and Commission Chair Sheila Kuehl opened the meeting by welcoming Dr. Robert Byrd to the Board. As the acting deputy director of L.A. County Department of Mental Health’s (DMH) Preventative Services Division, Byrd takes over for Christopher Thompson as the designated alternate member representing DMH. Kuehl cited Byrd’s work in the mental health field, including his work in developing early intervention programs and services to meet the needs of young people and families in several community-based organizations.

During her opening remarks as Chair, Kuehl also took the occasion to highlight First 5 LA’s role in promoting improved mental health outcomes for young children, especially in the face of the COVID-19 crisis. She emphasized the devastating psychological and emotional effects of the pandemic, not just on grown-ups but also on children.

“The mental health issues that people have been seeing in even very young children are more serious than those they saw before the pandemic,” said Kuehl. “Counselors at schools have been really struck by how isolation has affected certain populations.”

“I don’t know if we’re going to really understand the impact on our population of this pandemic,” she continued. “But I know we will be central in helping our many partners help our families.”

During her remarks, Executive Director Kim Belshé called attention to several societal issues that would have far-reaching implications for First 5 LA’s work moving forward. Chief among these was COVID-19 and the development of vaccines that have changed the course of the pandemic.

“It’s an extraordinary development, if not miracle, that vaccines have developed as quickly as they have with such a strong evidence base,” Belshé stated. “They really do represent a turning point to bringing the pandemic under control.” While recognizing that the decision to get vaccinated was different for everyone, she encouraged others to “follow the science.”

Another critical issue affecting the organization centered on the anticipated return to onsite work. Belshé noted that the pandemic had provided an opportunity to demonstrate what works well — and in some cases, less well — in remote work. 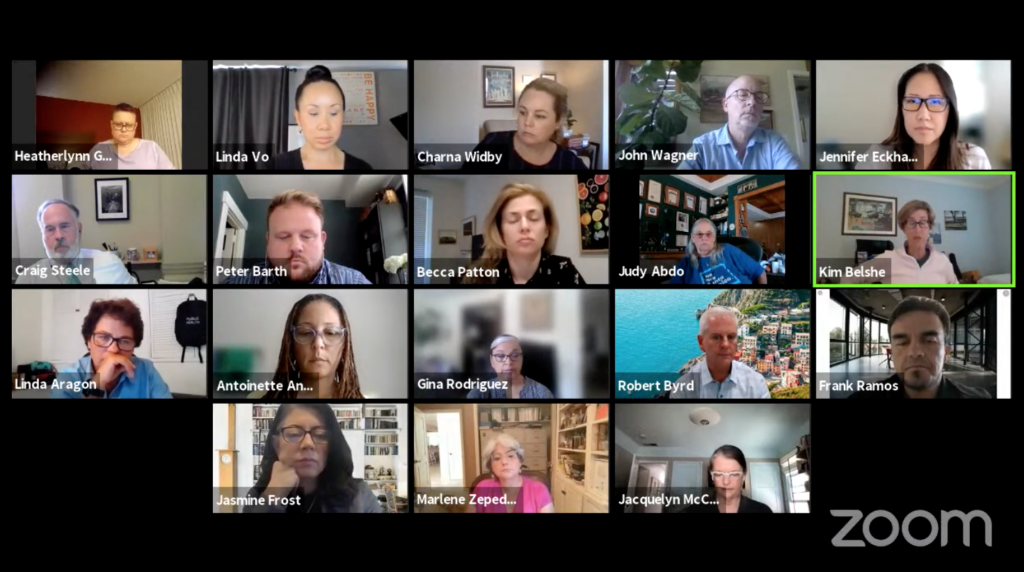 “This is another kind of inflection point,” Belshé said, “an opportunity to reimagine and rethink how we approach work, how we support workers, how we interact and engage with each other in the workplace.” She noted that Board and staff would continue to be an important part of the planning process.

Lastly, Belshé turned the Board’s attention toward the organization’s work in incorporating the values of diversity, equity, and inclusion into its work and mission.

“I really want to commend the team for leaning into the reality that we can’t separate the impact we seek from who we are and how we work together,” Belshe said. “Living and leaning into our values, particularly diversity, equity and inclusion, is absolutely critical to who we are, what we represent and what we aspire to be — and importantly, how we work together to maximum effectiveness.”

Eckhart briefed the Commissioners on the procurement policy update process and the importance of revising the policy — last updated in 2014 — in order to enable more effective and efficient implementation of First 5 LA’s current Strategic Plan.

“We set out to address the challenges attributed to the current procurement policies and processes that have resulted in inefficiencies, operational issues and outdated procurement strategies and methods,” Eckhart explained.

Specific to the last revision, Eckhart noted that staff had incorporated feedback from the Board regarding the policy recommendation to delegate contract authority to the executive director above the $150,000 threshold in cases of emergencies or when the Board was not in session. 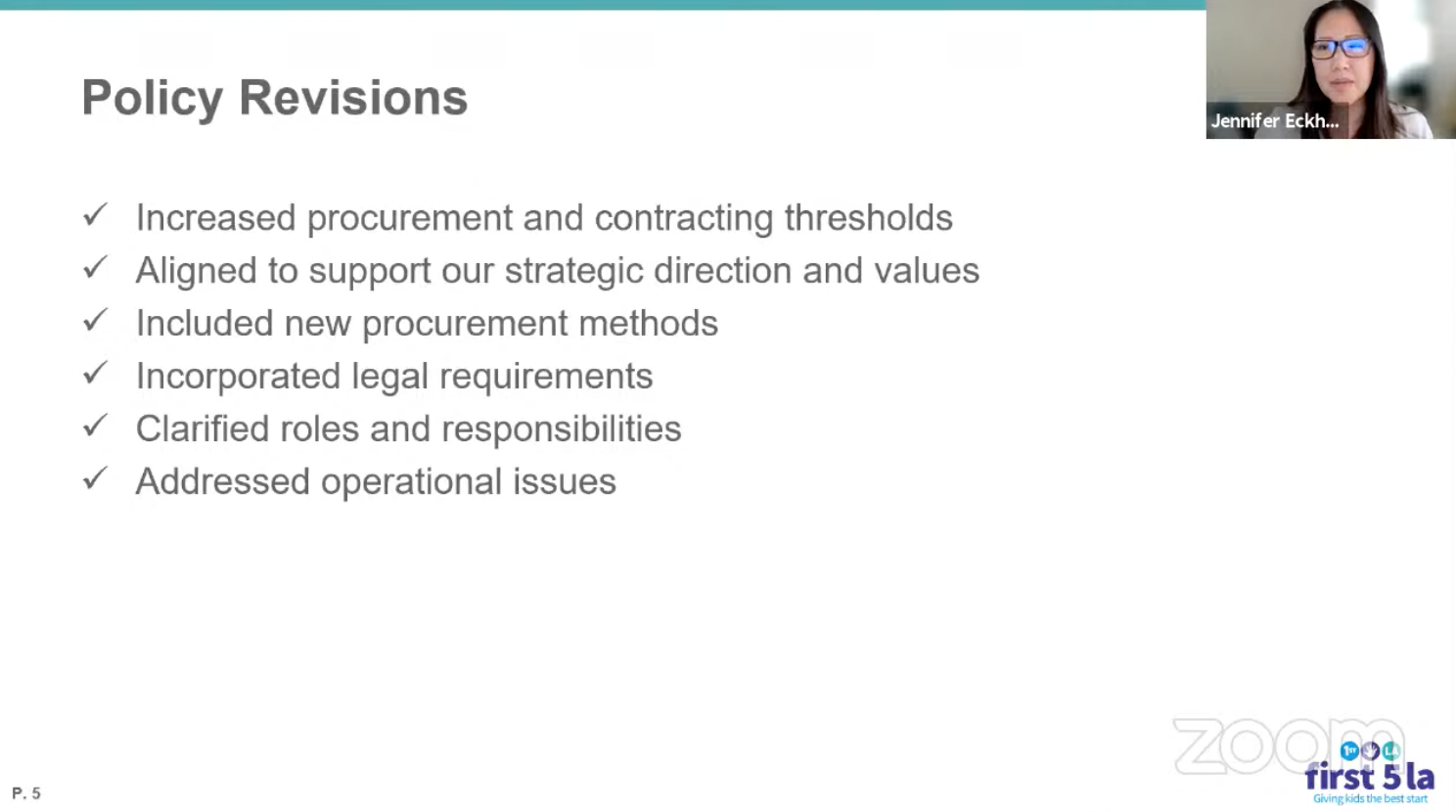 “That recommendation, however, did not include a cap or ceiling on the authority,” Eckhart continued. “The Board’s feedback on this was to consider guard rails to regulate any potential for abuse, regardless of who was executive director.”

Following a brief recess, the Commission next reviewed a recommendation to approve a five-year Strategic Partnership with the Child Care Alliance of Los Angeles (CCALA) and an initial contract that would launch a landscape analysis on home-based child care (HBCC) in L.A. County. Presenting on the item were Early Care and Education (ECE) Director Becca Patton, Program Officer Gina Rodríguez and Senior Program Officer Kevin Dieterle. 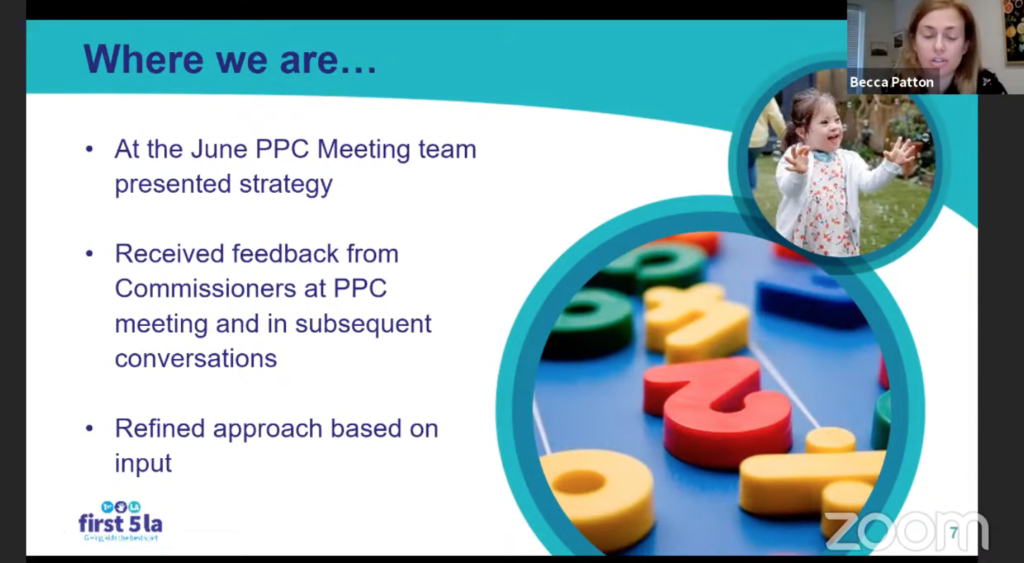 Dieterle added to Patton’s comments during his overview of the child care field. Presenting the latest data on child care usage, he noted that only 20% of subsidized care occurred in a center-based setting, with most children receiving care in home-based systems.

“Home-based child care is really the foundation of our entire system,” he emphasized, adding that HBCC serves children and communities in which public systems have historically under-invested. “Any discussion of early learning in L.A. County must include and center home-based child care.”

In addition to the launch of a landscape analysis, HBCC strategy activities would include the establishment of a Provider Advisory Group, a collaborative effort to decide on various strategies to pilot and test, and ongoing activities that create sustainable systems change and inform policy priorities. The Strategic Partnership would grant staff procurement authority for relevant work with CCALA for up to five years in an amount not to exceed $5,000,000.

Upon conclusion of the presentation, several Commissioners expressed their enthusiasm for the venture.

“We’re not just giving to the home-based providers,” Commissioner Jacqueline McCroskey emphasized. “We’re engaging, and we’re saying: You are the ones who actually know what needs to happen.”

Toward the end of the meeting, the Commission turned its attention to a proposed resolution that would establish a temporary meeting location at the California Endowment building in anticipation of the return to in-person Commission meetings. As a result of ongoing capital improvement work, the Commission’s regular meeting venue at First LA’s headquarters on Alameda Street will be temporarily unavailable.

Commission meetings were moved online following Governor Newsom’s executive order in March 2020, which allowed public agency meetings to be held remotely during the pandemic. Although the executive order is slated to expire at the end of September, Kuehl suggested adding language to the resolution to ensure First 5 LA had the flexibility to adapt to changing circumstances related to the COVID-19 pandemic. The motion was passed unanimously. More information on the resolution can be found here.

(Update: On September 16th, Governor Newsom signed A.B. 361, amending California’s open meeting laws to better facilitate virtual meetings during declared emergencies through January 1, 2024. Under this new A.B., First 5 LA anticipates that Board and Committee meetings will be held virtually through at least the end of 2021, pending any changes to our current state of emergency. Zoom information to join Board and Committee meetings telephonically and virtually for upcoming October and November meetings will continue to be made available through the First 5 LA website.)

The next Board of Commissioners meeting is scheduled for October 14. The updated agenda and location will be available at www.first5la.org/our-board/meeting-materials up to 72 hours before the meeting.