First 5 LA’s Meeting of the Board of Commissioners convened virtually on Sept. 8, 2022. The agenda included a vote to authorize the receival of funds from First 5 California’s Refugee Family Support Grant, and presentations on Strategic Plan review and refinement and living First 5 LA’s DEI value.

Los Angeles County Supervisor and First 5 LA Board Chair Sheila Kuehl began the meeting by reflecting on the recent Labor Day holiday. Highlighting the connection between labor rights and First 5 LA’s work of empowering the communities that are impacted the most by public systems, she uplifted the importance of trusting and listening to the people who are most experienced with the issues First 5 LA is working to solve.

“I think the notion of Labor Day reminds me that it is so important to include … the lived experience of the very people we want to serve and want to help, and how important that is and how right that is … and I believe how much we have incorporated that into what we do,” she said.

When it came time for remarks from the executive director, Kim Belshé highlighted the two presentations on the agenda. The first, on First 5 LA’s Strategic Plan review and refinement process and the second, on living First 5 LA’s Diversity, Equity and Inclusion (DEI) value.

“We’ve got two significant issues that we want to bring to the Board. Issues that, as we’ve begun discussing with you, are critical to our success as an organization and critical to the impact we seek in our work,” Belshé stated.

The consent agenda was unanimously approved. A notable item included the approval of a vote to authorize First 5 LA to receive funds from First 5 California’s Refugee Family Support Grant in the amount of $354,727. With funding from the grant, First 5 LA is partnering with International Institute of Los Angeles (IILA) to oversee funding for case management and system navigation, short-term emergency childcare and short-term emergency housing for refugee families. For more information, click here.

At the July Board of Commissioners meeting, First 5 LA officially kicked off the first cycle of its Strategic Plan review and refinement process. The September meeting served as an opportunity for First 5 LA team members –– as presented by Chief Transformation Officer Antoinette Andrews Bush, Health Systems Director Tara Ficek, Office of Data for Action Chief Data Officer Kimberly Hall and Strategic Planning & Refinement Senior Strategist Kaya Tith –– to return to the Board with further developments based on new staff-driven thinking and feedback from Commissioners.

Andrews Bush began the presentation by explaining why First 5 LA was undertaking efforts to review and refine the Strategic Plan, stating that the 2020-2028 Strategic Plan has broad and multiple elements that result in different interpretations of First 5 LA’s priorities which dilutes First 5 LA’s focus and impact.

“We need greater clarity on what we’re trying to accomplish, why and how, and this first three-year review and refinement cycle gives us the opportunity to do so,” Andrews Bush said. 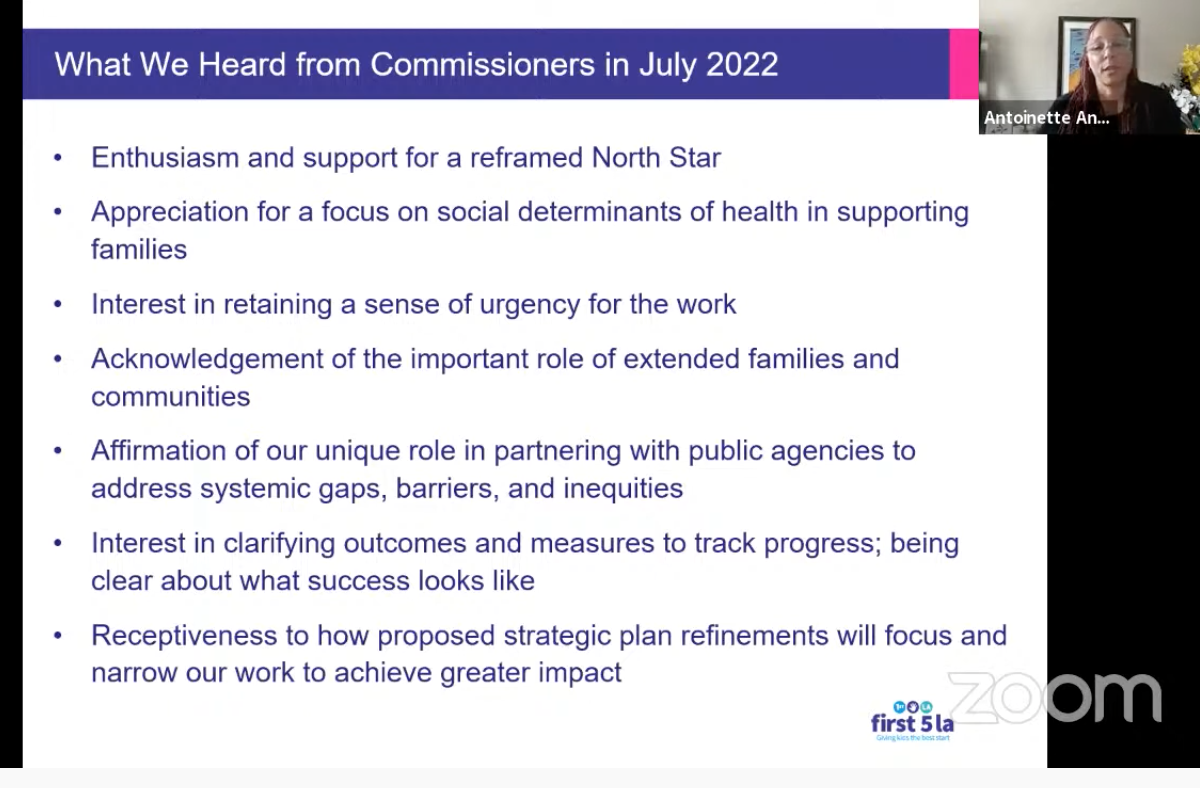 Highlighting Board feedback from the July meeting, she called out the Board’s enthusiasm around reframing First 5 LA’s North Star goal, emphasis on social determinants of health and focus on extended families and communities.

Additionally, Andrews Bush updated the Board on what First 5 LA team members have been working on since the July meeting, including cultivating an org-wide understanding of the refinements, aligning the refinements with County and community priorities and discussing how First 5 LA’s DEI commitments can be integrated into the review and refinement process.

In an update to the North Star reframing proposed in July, Chief Government Affairs Officer Charna Widby unveiled the still-developing language that now reads: “Every child in Los Angeles County will reach their full developmental potential throughout the critical years of prenatal to 5.” 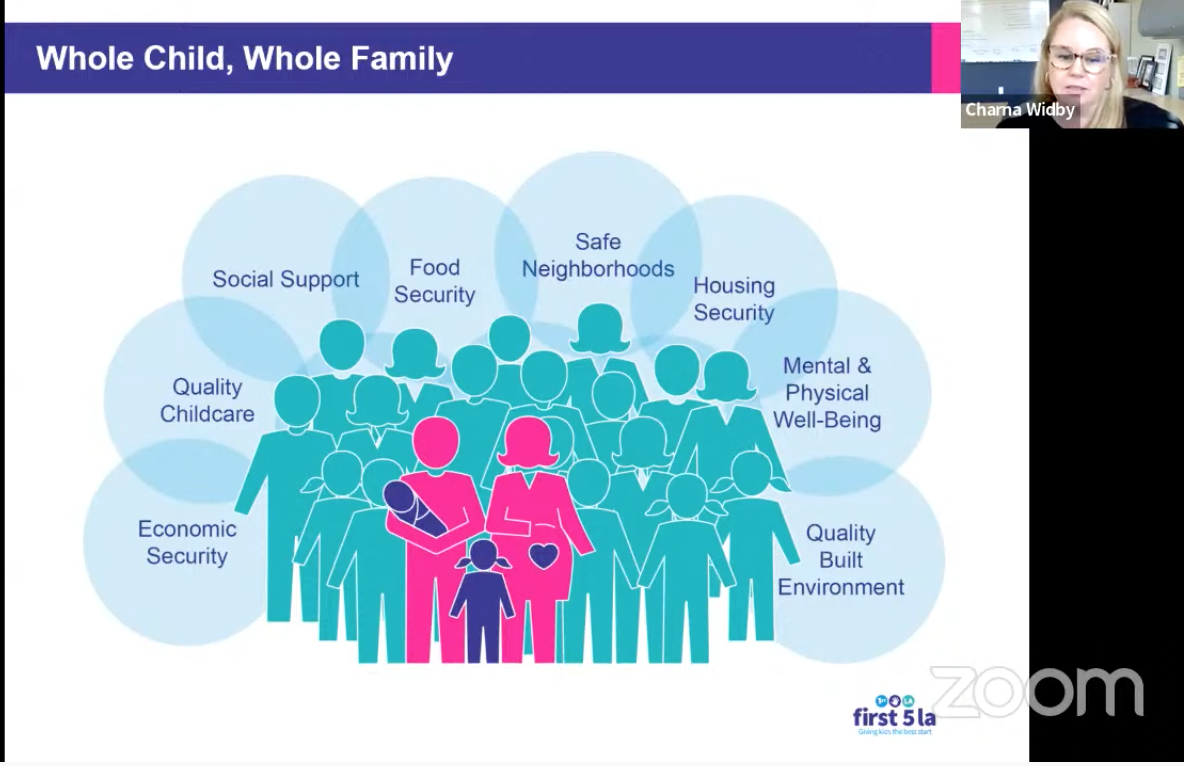 Widby called out the revision’s better alignment to First 5 LA’s whole child, whole family framework that orients First 5 LA’s work to the needs, well-being, and stability of families and their communities as an essential aspect of optimal childhood development.

“We know optimal childhood development involves a whole child, whole family wellness approach and that includes systematic attention to the caregivers’ wellbeing, needs, and must be an approach that fosters dignity, bonding, (and) healing within the context of creating empowered communities,” Widby said.

Reintroducing the Logic Flow statement shared in the July meeting, Ficek pointed out new refinements based on Board feedback. According to Ficek, “L.A. County” was added to ensure consistency with the refined North Star and call attention to First 5 LA’s geographical boundaries, while the word “critical” was added to uplift the sense of urgency around the prenatal to 5 developmental window. 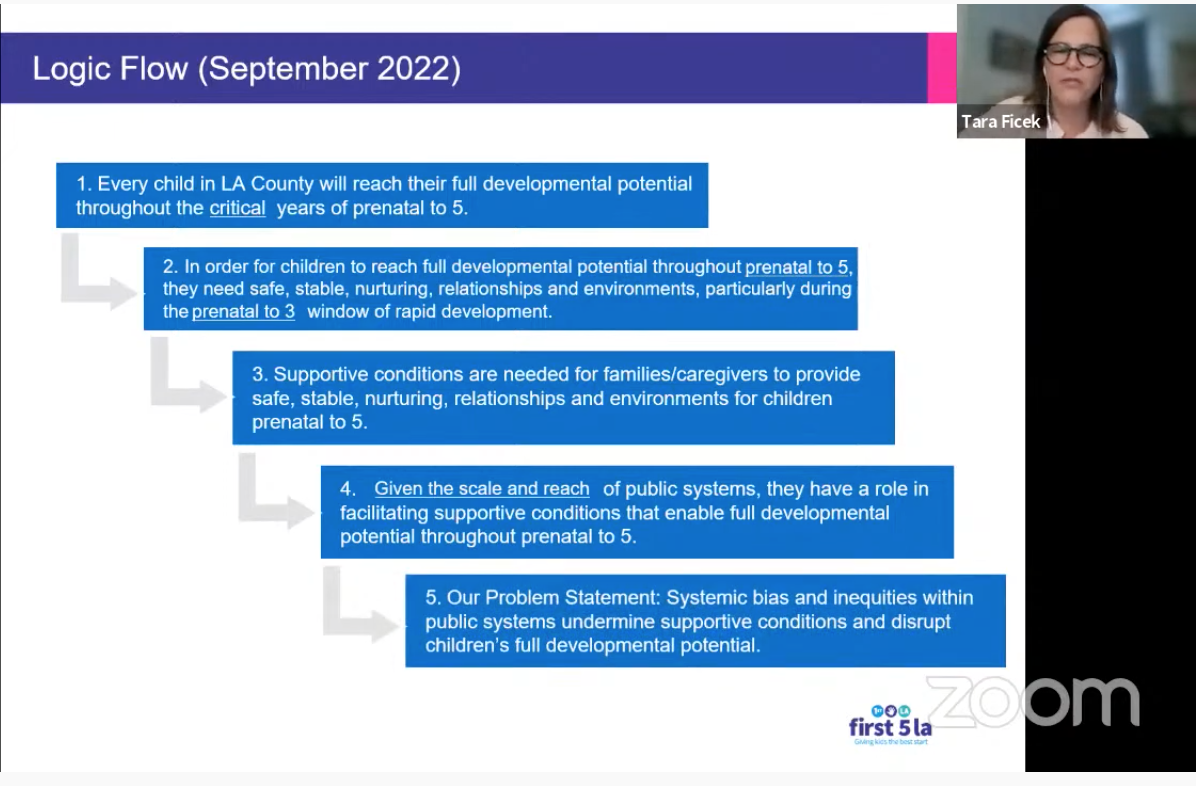 During the refinement process, questions about First 5 LA’s role and focus have come up consistently, and Hall provided a snapshot of First 5 LA’s unique position and perspective as an independent public agency with a mandate to promote child development, a long history of working within public systems, as well as a governing board with representatives from various family-serving agencies.

She also spoke of the opportunity in front of First 5 LA as a result of the North Star reframe and shared a refined “opportunity statement” that was initially presented at the July meeting.

“We propose that the opportunity in front of us is to work within and across public systems to align, integrate, and prioritize supports that are responsive to families and communities, particularly during the prenatal to 3 window of rapid development, to eliminate disparities,” she read.

Lastly, Tith gave an overview of next steps in the process, including incorporating feedback from the Board for sharing at the Sept. 22 Program and Planning Committee meeting, with the goal of the reframed North Star being made public in November 2022.

“What comes through strongly is a deep commitment to families and their struggles in raising children. I think rising above a narrow focus on services to really talk about conditions in which people live … it’s fundamentally the conditions we have to be concerned about,” Commissioner Deborah Allen said when it came time for Board discussion. “And the services are often remedial when we fail to create the conditions people need. So, I was very excited hearing this.”

The September meeting concluded with a presentation on “Living First 5 LA Values: Journey Toward Deepening Our Commitment to Diversity, Equity, and Inclusion” given by Andrews Bush and Seed Collaborative Co-Founder Evan Holland. 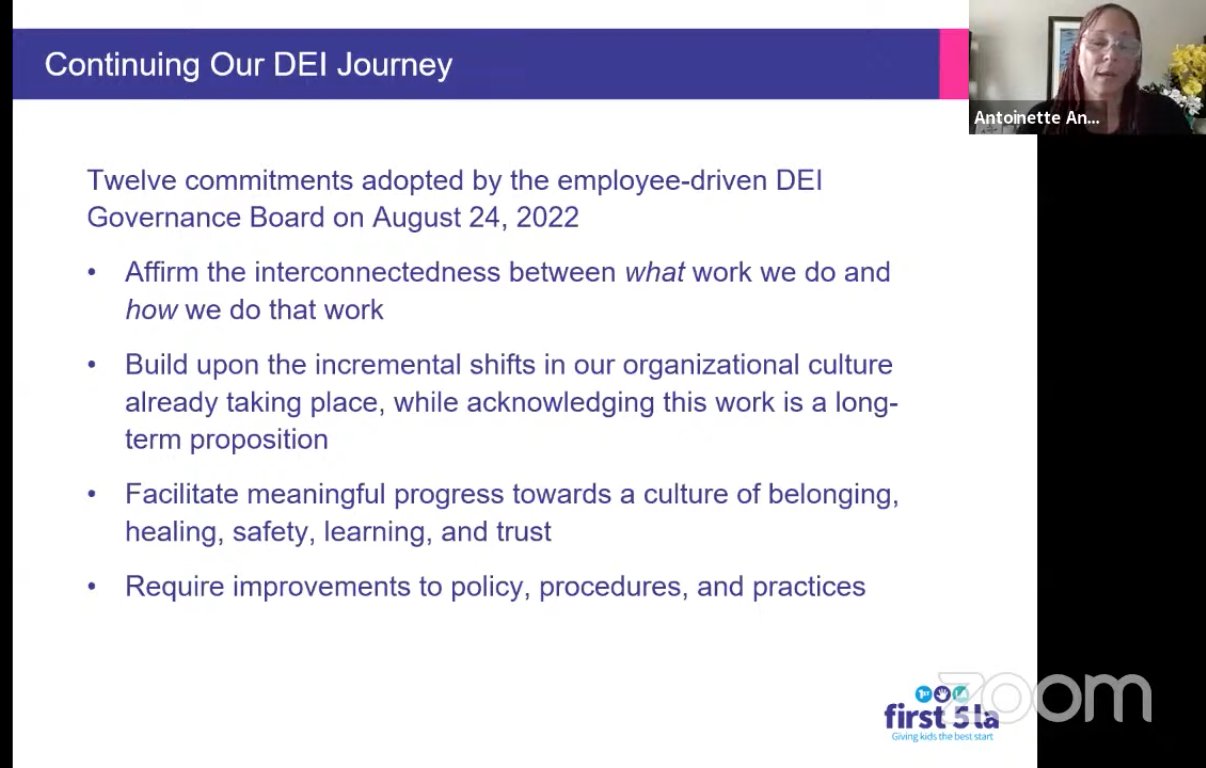 “Today marks an important milestone: First 5 LA is sharing publicly the commitments that we are making to live our DEI value by the way in which we conduct ourselves internally and externally,” Andrews Bush said when introducing the presentation.

“These Commitments reflect our desire to facilitate meaningful process toward a culture of belonging, healing, safety, learning and trust. And these Commitments require improvements to our policies, to our procedures and to our practices,” Andrews Bush stated.

The Commitments are segmented into three priorities areas, Andrews Bush explained. These areas include 1) strategic direction and values; 2) culture, internal relationships and experience; and 3) interpersonal and institutional relationships with grantees and partners.

Holland gave an overview of how the priority areas were developed based on commissioner feedback received at various touchpoints along First 5 LA’s DEI journey.

“The recent Board survey results highlights that anti-racism, justice, healing and belonging are critical to helping First 5 LA fulfill its role as a system change agent, and critical to commissioners for fulfilling their governance role,” Holland stated. 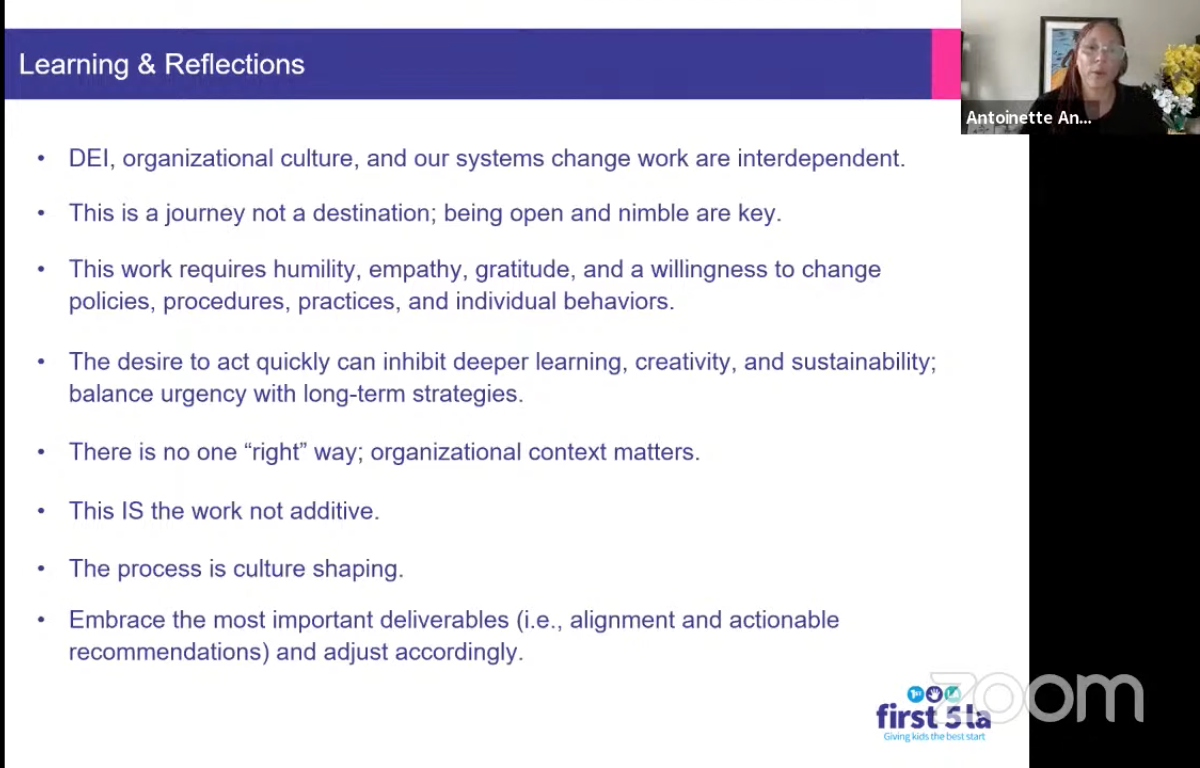 “It’s a journey, not a destination,” Andrews Bush said, highlighting learnings and reflections that came out of the process of developing the 12 Commitments. “We’re not checking the box and saying we have arrived. We’re actually being open and we’re being nimble. We need to constantly learn, reflect together, see where we’re making progress, and adjust as we need to.”

The presentation concluded with next steps in First 5 LA’s DEI journey. Andrews Bush told the Board that First 5 LA team members are working to identify key DEI outcomes and measures of success to regularly assess progress, learn and improve, and are integrating implementation of the Commitments into the Strategic Plan review and refinement process.

The next Board of Commissioners meeting is scheduled for October 16, 2022 at 1:30 p.m. Please visit www.first5la.org/our-board/meeting-materials 72-hours in advance of the date for more details.