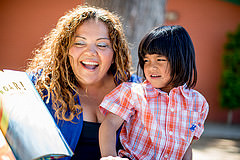 While the California budget remains in limbo, having long missed its deadline for approval, Gov. Arnold Schwarzenegger is facing another critical deadline with important implications for young children. As of 10 a.m. today, he has only 86 hours to make decisions regarding more than 700 bills on his desk. Among them are several that would improve the health, well-being and school readiness of young children.

First 5 LA supported a number of bills during this year’s legislative session. Five of these child and family-friendly bills made it to Schwarzenegger’s desk:

The governor has until September 30 to sign or veto bills passed by state legislators. Please call Kate Sachnoff at (213) 482-7577, if you would like more information on state legislation supported by First 5 LA.