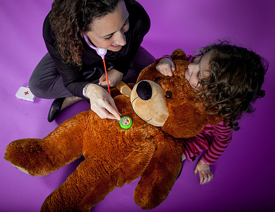 On June 13, 2013, the First 5 LA Commission approved its 2013 State Legislative Agenda, which includes 10 kid-friendly bills covering a variety of topics such as child care, preschool, nutrition, health care and other areas. Throughout the summer, the Monday Morning Report will profile each bill and explain how each has the potential to improve a young child's life. Previous Policy Picks are available here.

For many health care advocates, one of the big priorities this year is the passage of legislation that would sustain a vital source of funding for children's health care.

Authored by Sen. Ed Hernandez (D- West Covina), SB 239 would enact the Private Hospital Quality Assurance Fee Act of 2014. The bill would provide a two-year extension to an important fee payment program that is currently slated to end on December 31.

California law currently imposes a Hospital Quality Assurance Fee (HQAF) on private hospitals. The resulting revenue is used as matching funds to increase California's receipt of federal funds by billions of dollars for California's Medi-Cal program. California officials expect that an extension of the fee would add $310 million to the state's general fund in fiscal year 2013-14.

Part of the revenue raised from the HQAF and its federal fund match would go directly to services for children - the program is currently required to allocate $80 million each fiscal quarter for children's health care services. The funding would also be utilized in a number of other ways, such as supplementing reimbursements made to hospitals for services provided to Medi-Cal.

In related news, the California Hospital Association (CHA) recently submitted a ballot measure that would prohibit state regulators from imposing the fee unless the Medicaid dollars go directly to the hospitals. The ballot language does provide exceptions that would allow a maximum of 20 percent of the annual proceeds of the fee to provide health care coverage for children enrolled in Medi-Cal. According to CHA representatives, the state has diverted as much as $620 million from the hospital fee funds to the state's General Fund for other purposes since the program began.

SB 239 is scheduled for a hearing in Assembly Health Committee on August 13. For more information, please contact Ruel Nolledo at [email protected].