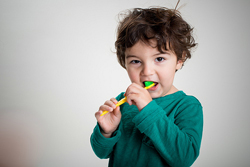 Gov. Jerry Brown closed out the 2014 state legislative session last week by taking action on hundreds of bills, a number of which were aimed at improving the health and early learning of young children.

In addition to a number of education budget trailer bills that modified sections of the early learning legislation enacted when the governor signed the state budget, Brown signed three bills supported by First 5 LA.

AB 1174 (Bocanegra, D-Pacoima), is intended to increase access to oral health services, which has been an issue for young children, especially in Los Angeles and Sacramento. First 5 LA has championed an innovative pilot called the Virtual Dental Home (VDH) Model, where specially trained dental hygienists or dental assistants provide oral health screenings to young children outside the dentist’s office. Information about the child’s oral health is then delivered electronically to an office-based dentist who makes a diagnosis and develops a treatment plan. AB 1174 also helps facilitate the use of the VDH model by expanding the scope of practice for dental hygienists and dental assistants, and by making teledentistry a Medi-Cal-reimbursable service.

Another bill signed by the governor could potentially strengthen the voice of children and parents in improving how Medi-Cal works for them. AB 357 (Pan, D-Sacramento) moves an existing panel, the Healthy Families Advisory Panel, to the Department of Health Care Services and renames it as the Medi-Cal Children’s Health Advisory Panel. This body will include a mix of providers and other experts, as well as a parent or caregiver of a Medi-Cal enrollee. The bill is supported by a number of children’s advocates, including Children Now, the Children’s Partnership, and First 5 LA.

A third bill, SB 1161 (Beall, D-San Jose), is expected to improve access to drug abuse prevention services for many Californians, including parents and caregivers of young children. In the event that the state seeks a federal waiver for its Drug Medi-Cal program, the bill requires the state to pursue federal approvals to address the need for greater capacity in for short-term voluntary inpatient detoxification services. First 5 LA currently funds a three-year program that provides screenings for substance use disorders, intervention, and referral and treatment services for pregnant women and parents or caregivers of children 5 and under.