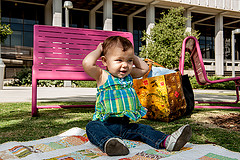 One of the key items on First 5 LA's Public Policy Agenda made significant progress last week in Congress. By overwhelming margins, a bipartisan measure passed in both the House and Senate to reauthorize Head Start, a comprehensive child development program for low-income 3- and 4-year-olds. It also includes a small component to work with children birth to 3 years old, called Early Head Start.

The "Improving Head Start for School Readiness Act of 2007" reflects the positions that First 5 LA, along with members of the Prenatal through Three Policy Roundtable, advocated in letters to Congress this spring. These improvements include setting aside half of all expansion funds toward Early Head Start, which is significant considering less than three percent of eligible infants and toddlers are currently able to access Early Head Start services. The bill also strengthens the training and staffing requirement for the infant and toddler-focused program.

Congress also approved a partial version of the "increase in eligibility level" element that First 5 LA had sought. Currently, families with incomes over 100 percent of the Federal Poverty Level (FPL), or $17,000 per year for a family of three, earn too much to participate in Head Start. Under the new bill, some families with incomes up to 130 percent of the FPL will be able to participate. In addition, homeless children were designated as a priority for enrollment.

Acknowledging the importance of quality improvement for early childhood programs, the measure reserves 40 percent of the new funds for quality enhancements, including increased compensation to enable recruitment of credentialed teachers. It addresses workforce improvements and training for teachers who work with English language learning children. Notably, the proposed law eliminates the controversial Head Start National Testing System, an annual achievement assessment of four-year-olds participating in the program.

While the legislation has enough support that it is likely to be veto-proof, it is funded under the Labor/Health and Human Services/Education appropriations bill that was recently vetoed. That measure included a $154 million increase for the Head Start program. More will be needed to fully implement the policy changes passed by Congress. Next steps for the legislation include the President’s signature and a signature or veto override of the Appropriations bill containing the funding for it.