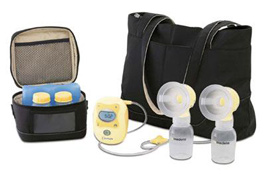 September 11 was the last day for the state Legislature to pass bills and send them to the Governor's desk to be signed. Now, Governor Arnold Schwarzenegger has until this Sunday, October 11, to sign or veto these pieces of legislation and all bills signed by him become law on January 1, 2010, unless noted in the legislation.

First 5 LA actively supported 12 bills during this year's legislative session; eight of these baby-friendly bills made it to the Governor's desk and many still need your active support in order to become law. Bills that have been signed or chaptered into law, as of September 30, are noted in the summary.

The remaining seven bills that support the well being of children need active public support in order to become law. Listed below is a brief synopsis on each bill as well as a link to the final bill language.

AB 98 (de la Torre, D-South Gate): This bill would require new forms for health insurance policies submitted to the California Department of Insurance after January 1, 2010, to provide coverage for maternity services. Click here to link to the bill's final language.

AB 217 (Beall, D-San Jose): This bill establishes the Medi-Cal Alcohol and Drug Screening and Brief Intervention Services Program. Authorizes a public entity to provide or contract for these services for Medi-Cal beneficiaries who are pregnant women or women of child-bearing age. It requires the program to be administered in accordance with federal expenditure requirements and relates to claiming federal financial participation procedures. Click here to link to the bill's final language.

AB 513 (Deleon, D-Los Angeles): This bill requires specified health care service plans and health insurers to include coverage for lactation consultation and for the rental of breast pumps as part of their health care service plan contracts or health insurance policies that provide maternity coverage. Click here to link to the bill's final language.

AB 543 (Ma, D-San Francisco): This bill will allow the use of the Nurse-Family Partnership program grant monies as a match for other grants administered by the Department of Public Health and would make those funds available for the program upon appropriation by the Legislature. It would also permit the department to accept federal grants for purposes of the program. Click here to link to the bill's final language.

AB 627 (Brownley, D-Santa Monica): This bill would require the State Superintendent of Public Instruction to establish a pilot program for at least 12 months in duration in which licensed child care centers and child day care homes selected by the department shall implement certain nutrition and physical activity standards in exchange for a higher state meal reimbursement. Click here to link to the bill's final language.

AB 667 (Block, D-San Diego): This bill allows for fluoride varnish in the topical applications to be used and applied by any person, including dental assistants, to the teeth of a person being served in an elementary and secondary school as well as a public health setting or program that is created or administered by a state or local governmental entity. It would require that they be provided in accordance with a prescription and protocol issued and established by a physician or dentist. - signed into law on August 5, 2009. Click here to link to the bill's final language.

ACR 75 (M.Perez, D-Coachella): This constitutional resolution recognizes the pioneering work of promotores and community health workers in delivering vital and cost-effective health care services in communities throughout California and declares October 2009 as California Promotores Month. Chaptered by Secretary of State on September 29, 2009. Click here to link to final language.

SB 257 (Pavley, D-Santa Monica): This bill relates to a reasonable amount of break time for state employees to express breast milk. It requires every state agency and department, including local offices, when notified by a female employee that she is nearing maternity leave, to notify the employee of specified information regarding breastfeeding. Click here to link to the bill's final language.

Please call Howard Jacobs, government affairs manager, at (213) 482- 7555, if you would like more information on state legislation supported by First 5 LA.