Making the News: Baby Bust or Birth of a New Outlook on Kids? 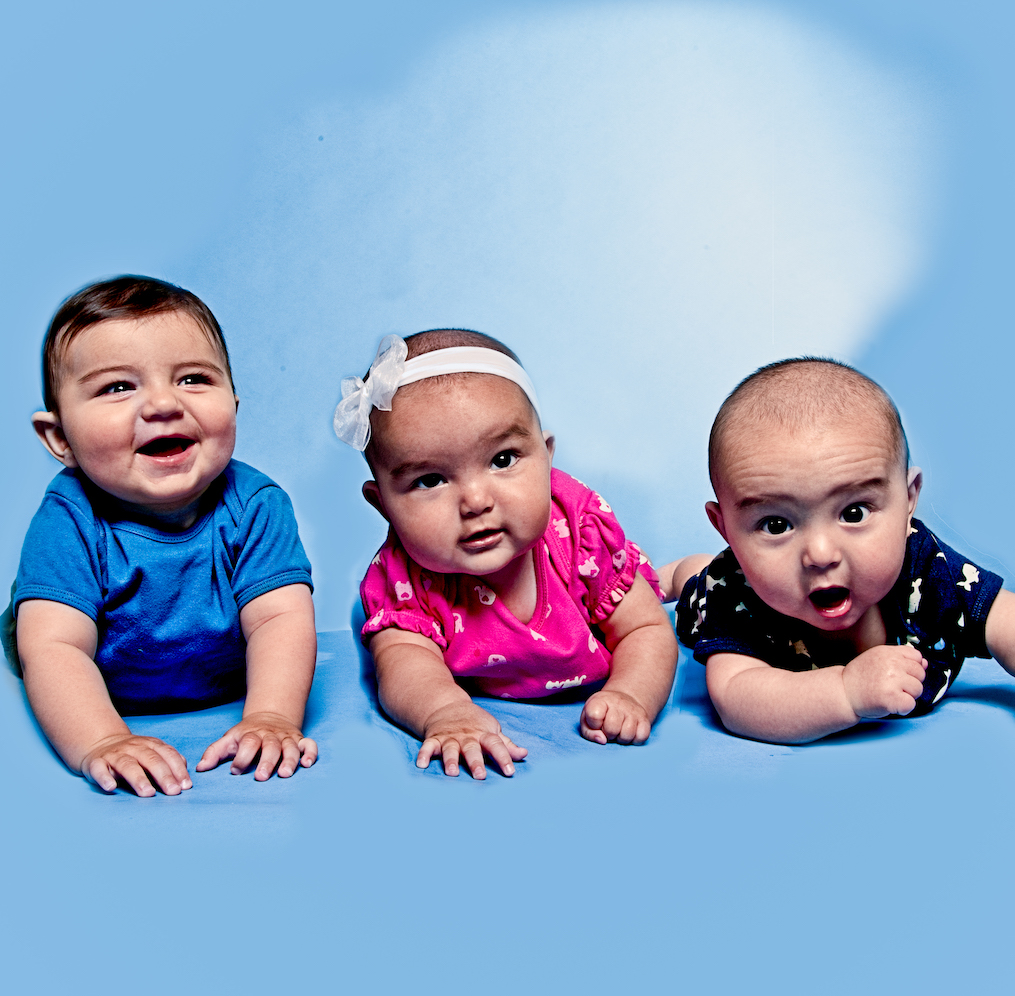 People in the United States are having fewer children and later in life, mirroring a trend in many developed nations. The U.S. birthrate is currently less than it was in the 1980s, and this raw data has demographers and sociologists speculating as to why and what it means.

Both national and local news outlets have covered the potential reasons behind the decline, and how not having enough people to hold up our current economic model could spell disaster. Or not. It depends on your outlook.

This “Baby Bust” edition of Making the News captures the last year of coverage on the demographic shift, and some of the perspectives that researchers and other pundits are sharing. 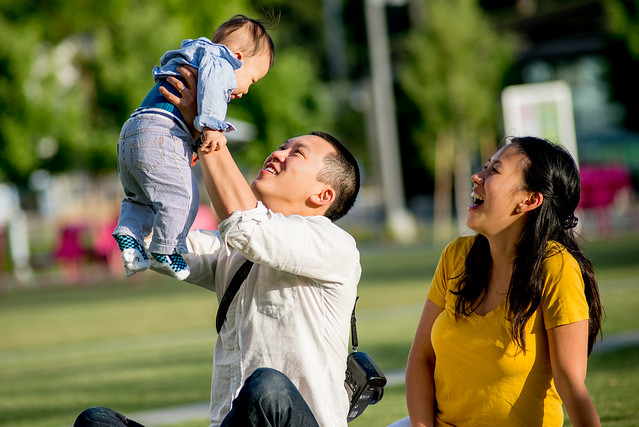 Historically, birthrates reflect economic prosperity, so when money is tight people hold off on having kids. We saw this in the wake of the Great Recession, with a deep decline starting around 2008. When the economy began to recover, however, the birthrate continued to decline, causing demographers to scratch their heads. We are now in a 30-year low, despite a period of economic prosperity. Is this so-called “Baby Bust” a cause for concern? Or not that big of a deal?

On the concern side, a weak workforce can’t support the Social Security system, creating a crisis for aging populations. Also, school systems receive funding based on number of students, so fewer students means less funding, and the potential shuttering of schools.

While there is no single, definitive reason for the downturn, one piece of disaggregated data shows that efforts to reduce teen pregnancy are working. This is a good thing, but it has an undeniable effect on the national birthrate. Down 72% since 1991, teen pregnancy is at the lowest rate since the government began collecting data.

On the other end of the spectrum, the number of women having children later in life has shown a slight uptick, indicating that women want to establish a career before having kids (editor’s note: like men, for generations). Overall, the numbers are still declining, with many women in their 20s and 30s choosing not to have children. 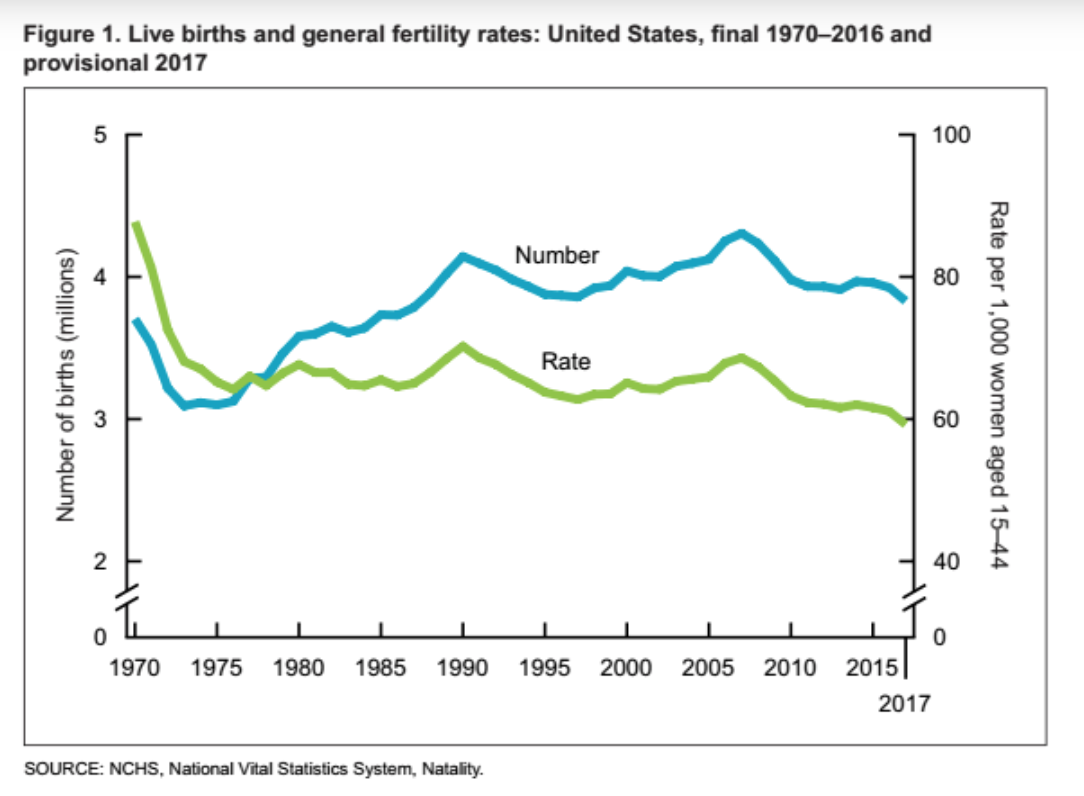 The possible social and economic forces behind the decline include the high cost of child care, poor family leave policies and even climate change. The New York Times conducted a survey of 1,858 men and women ages 20–45 to try to understand the numbers and found that most people who said they didn’t want to have children did so because they wanted more leisure time; additionally, people with fewer children than they wanted cited the cost of child care and wanting to spend more time with the kids they did have.

Prominent demographer Dowell Meyers ominously said in an interview with NPR, “the birthrate is a barometer of despair,” explaining that young people won’t make plans to have babies unless they are optimistic about the future.

As policy makers shape how society supports the children we do have, it’s important to stay informed about the factors that are influencing birthrates, and their potential impact on the future.

To assist you, our readers, in learning more about this topic we have compiled a library of article links below that are organized by month. We hope you find this comprehensive list of news coverage and reports helpful.

According to a report by the Centers for Disease Control and Prevention, in 2017 the birthrate fell for nearly every group of women of reproductive age in the U.S., reflecting a sharp drop that saw the fewest newborns since 1987. (Chappell, 5/17/18)

Fortune: U.S. Birth Rates Are Tumbling. If You Want to Know Why, Follow the Money

With its third annual decline in a row, statistics showed that the U.S. birth rate is at its lowest in three decades. But why are Americans having fewer babies? (Meyer, 7/6/18)

Quartz: When will America wise up to the truth about why women aren’t having children?

The U.S. fertility rate is at a record low. Researchers are quick to look to the economy as explanation, yet the falling rate has persisted despite the recovery. (Brown, 7/7/18)

The New York Times: Americans Are Having Fewer Babies. They Told Us Why.

Women have more options, for one. But a new poll also shows that financial insecurity is altering a generation’s choices. (Miller, 7/5/18)

The fertility rate in the United States fell to a record low for a second straight year, federal officials reported, extending a deep decline that began in 2008 with the Great Recession. (Tavernise, 7/16/18)

Washington Post: The U.S. spends less on children than almost any other developed nation

The federal government now spends less than it did about 30 years ago on some of the country’s poorest children, the result of cuts to federal welfare programs, according to a new research paper. (Stein, 7/16/18)

The total fertility rate, which estimates the average number of children a woman could expect to have over her lifetime at current birth rates, is below the “replacement rate” for fertility at 1.76 births per woman. (C.K., 10/31/18)

The Hechinger Report: The number of public school students could fall by more than 8% in a decade

The U.S. birth rate has dipped to an all-time low, and projections show a potentially grim effect on schools: The number of public school students could drop by 8.5% by 2028. (Campisi, 11/27/18)

Policymakers must confront the reality that all our long-term obligations will have to be financed with substantially fewer people (or, perhaps, substantially more immigrants) than most actuarial projections assume. (Stone, 12/17/18)

CNN: US fertility rate is below level needed to replace population, study says

The total fertility rate for the United States in 2017 continued to dip below what’s needed for the population to replace itself, according to a new report from the National Center for Health Statistics. (Howard, 1/10/19)

When sociology professor Caitlyn Collins set out to interview 135 middle-class women in Sweden, Germany, Italy and the U.S. about how they make motherhood work with their careers, she was surprised by what set American women apart. (Forde, 1/12/19)

Though the report doesn’t speculate about why fertility rates have been falling, other researchers have posited that cultural shifts, economic anxiety and a slew of other factors likely all play a role. (Wheeling, 1/11/19)

As the U.S. population ages and the country’s number of births continues to fall, just two states in 2017 met a fertility benchmark that’s considered the level needed for a population to replace itself, according to new data from the Centers for Disease Control and Prevention. (Galvin, 1/11/19)

MarketPlace: Americans are having fewer babies, and it might have to do with the economy

Whether it is economic insecurity, changing values or a young adult population that prioritizes their education over having children, the fact remains that Americans are having fewer babies. (1/22/19)

MarketPlace: Why declining birth rates are a phenomenon in developing countries

Americans have been having fewer babies for several years now, especially since the Great Recession. The CDC report showing that fertility rates are at record lows didn’t surprise economists or demographers. (1/25/19)

KPCC: Do housing costs deserve some of the blame for California’s falling fertility rate?

When this 28-year-old nurse and her husband learned last year that she was pregnant with their first child, they were thrilled, and they were petrified. (Sharma, 1/30/19)

Over the last decade, the U.S. fertility rate has dipped to its lowest point in history. Economists expected a short decline in the number of births during the Great Recession, but they believed we would start making kids again once the economy recovered. (Rosalsky, 2/12/19)

The Hill: With low birth rate, America needs future migrants
America’s challenge — if it wants to remain a superpower — is not to build walls and restrict migrant flow excessively, as the Trump administration insists, but rather to properly manage a more generous migrant flow so that its population continues to grow. (Zilian, 2/25/19)

Education Next: The Baby Bust Goes to School

It’s not easy to surprise demographers, given the long timelines with which they work. But back in 2007, when the number of babies born in the U.S. hit the all-time high of 4.32 million, topping even the baby boom peak, few could foresee the baby bust that was about to come. (Petrilli, 4/1/19)

The U.S. birth rate hit a 32-year low in 2018, which could spell trouble for popular social programs for older Americans like Social Security and Medicare. (De Lea, 5/15/19)

There were more than 3.7 million estimated births in 2018, down 2% from the year before, said the Centers for Disease Control and Prevention’s National Center for Health Statistics. (Keshner, 5/15/19)

USA Today: Why the US birthrate hitting a 32-year low could become a big problem
The birthrate in the U.S. hit a 32-year low last year as the number of babies born dropped for the fourth straight year, said federal health officials. (Miller, 5/15/19)

With American women increasingly delaying having children, fewer U.S. babies were born in 2018 than in any year since 1986, according to provisional data from the Centers for Disease Control and Prevention’s National Center for Health Statistics (NCHS). (Ducharme, 5/15/19)

The numbers are part of a decades-long trend toward fewer and fewer babies being born each year — which means we’re getting further away from the possibility of having enough children to replace ourselves. (Carroll, 5/14/19)

The number of babies born in the country has dropped four years in a row, a new CDC report says. (Galvin, 5/15/19)

The Atlantic: The Misplaced Fears About the United States’ Declining Fertility Rate

Many women may not be abstaining from having children, but simply delaying it. (Wong, 5/17/19)

Well after the U.S.-China trade fight is history, America’s economy will still be living with the consequences of a fertility slump. (Sparshott, 5/15/19)

The U.S. fertility rate has reached a record low, and the total number of births in 2018 was the lowest it has been in more than 30 years, according to new data from the Centers for Disease Control. (Kight, 5/15/19)

The United States is confronted by its lowest number of births in 32 years, according to provisional data released by the National Center for Health Statistics. (Patino, 5/14/19)

The Hill: Birth rates for teens, women in their 20s hit record lows

U.S. birth rates hit their lowest point in 32 years in 2018, according to data released by the Centers for Disease Control and Prevention (CDC). (Budryk, 5/15/19)

Forbes: What (If Anything) Should We Do About The Rock-Bottom U.S. Fertility Rate?

Thoughts about retirement policy from an actuary’s perspective. (Bauer, 5/15/19)

Huffington Post: The Devastating Reason Some Women Are Deciding Not To Have Children

As scientists continue to punch out increasingly apocalyptic warnings about the state of the planet, and feelings of “eco-anxiety” rise, it’s perhaps not surprising that some people have started to question whether they want to bring a child into the world. (Paddison, 7/1/19)

The confusion over the rules of romance in the digital age shared by Koch and so many others might explain why millions of Americans are having less sex than previous generations did at the same age. (Sanders, 8/6/19)