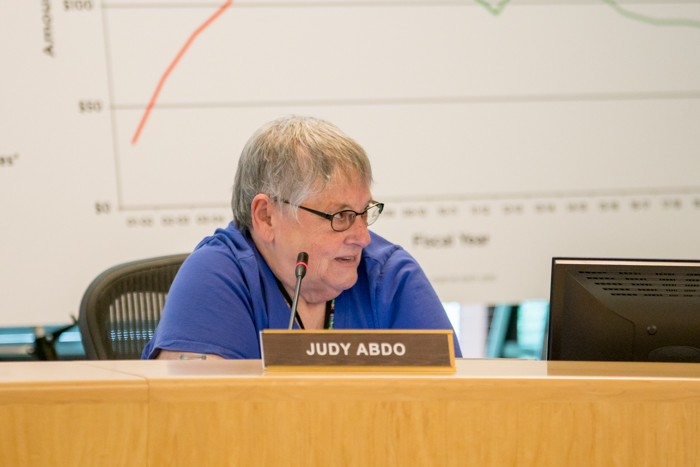 In a recent Board meeting, First 5 LA Commissioner Judy Abdo described systems change as “making things work better” and one of the ways to make things work better is to change the rules — called policies — which dictate how our schools, hospitals, and other systems work.

To make things work better for young children, First 5 LA is changing the rules. Indeed, we are literally rewriting them.

For the first time in First 5 LA’s history, we have shaped legislation from the earliest moments possible. Last December, Senior Policy Strategist for Health and Families Charna Martin, along with our partners, worked with Assemblymember Kevin McCarty (D-Sacramento) to introduce new legislative language for Assembly Bill 11, a bill that would improve developmental screening rates for low income children age 0-3.

This milestone also marks the first time First 5 LA was listed as a public supporter for a bill at the start of the legislative session. We are excited that this bill has received unanimous support to-date, and that local Assemblymembers Adrin Nazarian (D-Van Nuys) and Wendy Carrillo (D-East Los Angeles) have agreed to co-author the legislation.

How did this happen? Simply put, we changed the rules for ourselves.

Previously, developing First 5 LA’s legislative agenda involved a long process which resulted in staff waiting to advocate for legislation until mid-April, even though California’s legislative session starts in January, and bill concepts are introduced even earlier, typically in the fall.

This is why the Policy Department spent a lot of time in 2017 working to articulate a policy and systems change agenda reflective of First 5 LA’s goals. Unlike a legislative agenda, which reflects specific policies supported or opposed by First 5 LA, a policy agenda outlines the goals guiding First 5 LA’s advocacy.

Approved by our Board last November, the policy agenda now allows the Policy team to engage in state and federal advocacy from the earliest moments possible.

“In total, First 5 LA is currently supporting 7 pieces of state legislation, actively shaping an additional 14 bills, and expects to advocate for more legislation throughout 2018.” -Peter Barth

In addition to shaping Assembly Bill 11, our new approach allowed Senior Policy Strategist for Early Care and Education Becca Patton to work with the State Early Care and Education Coalition (funded and coordinated by First 5 LA and First 5 California) to create a “Billion Dollars for Babies” budget ask to expand access to early learning programs for infants and toddlers. Aligned with this significant ask, First 5 LA is supporting AB 2292 authored by Assemblymember Cecilia Aguiar-Curry (D-Winters) to make policy changes in alignment with the Coalition’s ask, including increased rates for providers serving infants and toddlers.

In total, First 5 LA is currently supporting 7 pieces of state legislation, actively shaping an additional 14 bills, and expects to advocate for more legislation throughout 2018.

In support of our policy asks, Senior Government Affairs Strategist Jamie Zamora is proactively building relationships with the 59 elected officials who represent L.A. County in Sacramento and Washington DC so we can build more champions willing to work with First 5 LA to advance policy change on behalf of our county’s youngest residents.

All of these efforts are building upon our track record of success. Last year, thanks to the work of dedicated advocates including First 5 LA, a number of state policies were changed to help make things work better for young children and their families. Here are a few examples:

First 5 LA strongly supported all of these bills among others that were signed into law by the governor, and for the past few years has taken positions on state and federal legislation aligned with our priorities.

Collaboration is a key to success. We work with state advocates at California Strategies and federal advocates at The Raben Group to represent First 5 LA on a daily basis in our capitals, and we partner with organizations like the Advancement Project, Children Now, Child 360, the Child Care Alliance of Los Angeles, the Los Angeles Area Chamber of Commerce, and Early Edge, among others. We also play a key role convening various advocates to develop common policy solutions for children.

While we are pleased by the progress we’ve made this year, our work is just starting and we look forward to collaborating in “making things work better” to ensure that all children enter kindergarten ready to succeed in school and life.