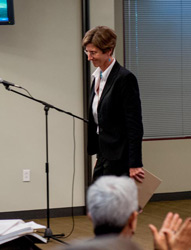 LOS ANGELES——–Kim Belshe has been named the new Executive Director of First 5 LA. Belshe, a veteran public administrator and nationally-recognized policy expert, will join the agency in early November.

Belshe served as the Secretary of the California Health and Human Services Agency under Governor Schwarzenegger from 2003 to 2011. She was a member of the Governor’s cabinet and his chief advisor on health, social services and rehabilitative policies throughout his tenure. In that capacity, Belshe managed an agency that had more than 32,000 employees, with a total state budget of more than $78 billion. The agency had oversight of 12 state departments and one board that were responsible for providing Californians with health, developmental, mental, rehabilitative, social and other critical services. She previously served as deputy secretary of the Health and Welfare Agency and director of the Department of Health Services under Governor Pete Wilson.

“I am honored and excited to lead First 5 LA in the next phase of its work to ensure that all Los Angeles County children are born healthy and reach their full potential,” said Belshe. “The aspirations, mission and goals the First 5 LA Commission has articulated are ambitious, but the young children of Los Angeles County deserve no less. I’m eager to be a part of this important undertaking and do so with a readiness to listen, learn, and engage with and on behalf of the County’s youngest children and their families.”

Belshe, who earned a bachelor’s degree in government from Harvard College and a master’s degree in public policy from Princeton, currently serves as Senior Policy Advisor with the Public Policy Institute of California. In this capacity, she has served as a resource to PPIC leadership and staff as well as the broader community on health and social services, fiscal, governance and related reforms.

Belshe also is a member of the five-member Health Benefit Exchange Board, which will create an insurance market in California to be used under the federal health care overhaul. In 2011 she was named to the Kaiser Commission on Medicaid and the Uninsured, dedicated to improving health care coverage and access to care for low-income populations. She also served on the first Board of Commissioners of First 5 California.

“”Kim Belshe is accomplished in both public policy and administration,” said Los Angeles County Supervisor and First 5 LA Board Chairman Zev Yaroslavsky. “She is one of the most respected leaders in health and human services in the State of California. Kim is committed to First 5’s mission of improving the quality of life of all children 0-5, and she has the talent, intellect and skill to do this job. In Kim, we have found the right person to lead our organization, and we look forward to great things from her.”

Belshe is a native of San Francisco.