Violeta Recinos’ son was just eight months old when he got COVID after his father contracted the virus. “It was very serious,” the 35-year-old mom said during an Early Childhood Health online chat that was held last month by First 5 LA and the Los Angeles County Department of Public Health (LACDPH) to address COVID-19 vaccine hesitancy. “My child was really sick.”

He recovered, but a month later, his face, hands and feet swelled up. Recinos took him to hospital after hospital, finally seeing a specialist who informed her that the swelling was caused by allergies, a fairly common secondary effect of COVID.

Still, when the federal Food and Drug Administration (FDA) approved COVID vaccines last year for children 6 months to 5 years of age, Recinos’ family pressured her not to inoculate the baby. The vaccine could delay his walking and talking or even lead to autism, relatives said. “I was scared of all the myths I was told,” Recinos said. But one thing changed her mind — she couldn’t let her child suffer through such a severe illness again. She had him vaccinated.

“I have peace of mind that my baby is protected,” she said. “He might get sick again, but he won’t be nearly as sick as he was.” 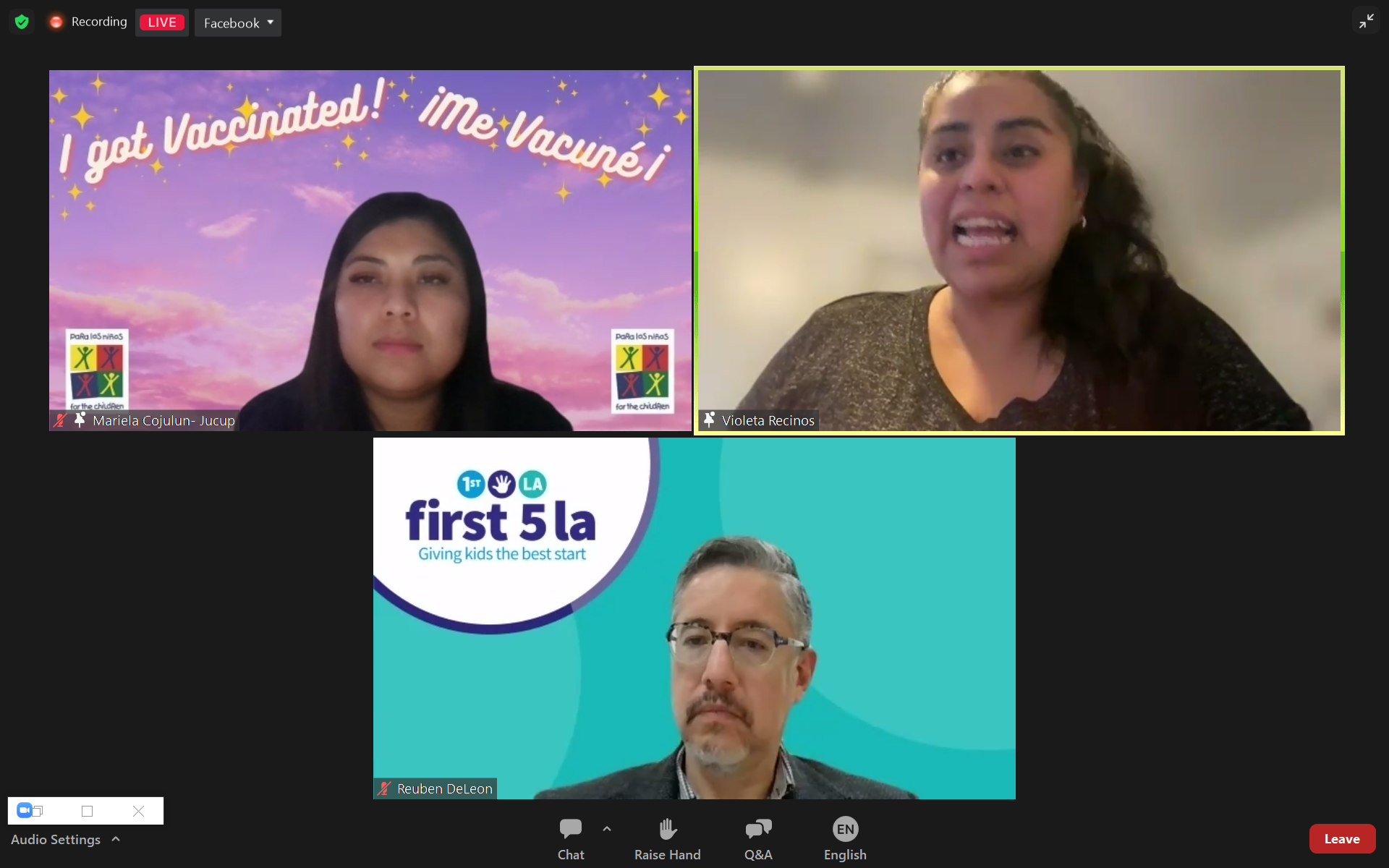 Unfortunately, parents like Recinos are in the minority. As of December, only 10% of Los Angeles County parents of youngsters under 5 had vaccinated their children against COVID. The issue is increasingly serious as COVID rates — along with hospitalizations and deaths — are skyrocketing with the onset of cold weather and people spending more time indoors. At the same time, influenza and RSV (respiratory syncytial virus), both of which cause similar, cold-like symptoms, are following similar trends.

Vaccine uptake has been low across the board for small children. But Black and Latino youngsters are particularly at risk. They have seen much lower inoculation rates, just 2 percent, than their Asian or White counterparts — 14 and 9 percent, respectively — according to data from the California Department of Public Health. Moreover, children living in healthier neighborhoods, which provide better access to parks, clean air and health care, are 10 times more likely to be inoculated than children living in the least healthy places.

“It’s sobering information,” Martin said. “Vaccines are much safer than the risk of getting COVID-19.”

Vaccines have been proven to be safe for pregnant people and breastfeeding parents, as well as infants, Martin noted. While some side effects, such as fever, discomfort or fatigue, may be experienced, these generally last only a day and are minor compared to possible outcomes for COVID -19. “There are side effects for everything,” she said.

While COVID vaccinations may not eliminate infection entirely, they significantly reduce the risk of serious illness that can lead to hospitalization, death or long-term aftereffects. “Prevention from severe episodes is what we look for,” Martin said.

One such myth is that the vaccines were developed too quickly and lacked proper trials and validation. In fact, they underwent the requisite four phases of clinical trials, Cojulun-Jucup affirmed. Some phases were overlapped in order to speed up the process due to the public health emergency, but no step was skipped. Moreover, the FDA approved the vaccines, she noted. 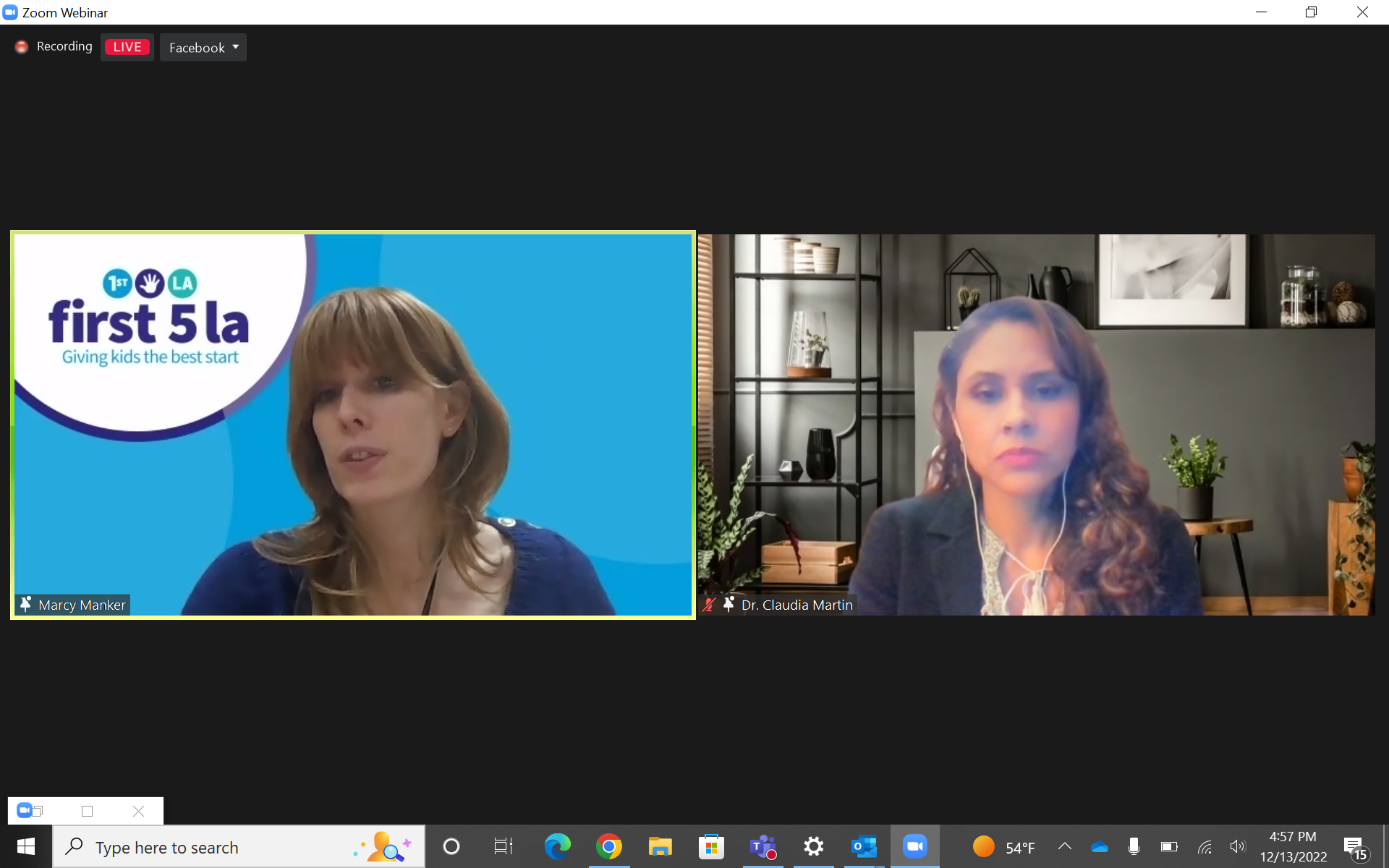 Some people also falsely believe that mRNA vaccines — a specific type of vaccine that promotes protein production — will affect children’s DNA. The mRNA never enters the nucleus of cells where DNA is stored, Cojulun-Jucup said. “It doesn’t affect the DNA of children in any way, shape or form.” Still, others think that the vaccines will lead to myocarditis or heart inflammation. However, this condition is rare — affecting only one in 200,000 patients — and has not appeared at all in children under age 5 who were vaccinated, she said.

Cojulun-Jucup said she received her first booster shot when she was pregnant and her second while she was breastfeeding. Neither she nor her baby has experienced any ill effects. “I can speak for myself: The vaccine is safe,” she said.

Recinos, who also noted that she was safely vaccinated while pregnant and received two boosters while nursing, said parents should not take the risk of getting COVID lightly. The vaccine left her son, now 20 months old, with a fever that lasted a day, while the virus left him with a number of allergies and a strict diet that rules out nuts, wheat or eggs, among other foods. “It really makes me sad. This is a pretty serious disability to have,” his mom said. “I’m hoping he’ll grow out of it.”

Dr. Martin noted that allergies are an overexaggerated response of the immune system alerted to the COVID virus, not an effect of the vaccine. “The risk is much higher for aftereffects of COVID than from the vaccines,” she said.

Recinos urged parents to be advocates for their children’s best interests. “You have to trust in God, but there’s also science,” she said. “You have to be informed. I’m a believer in vaccines.”