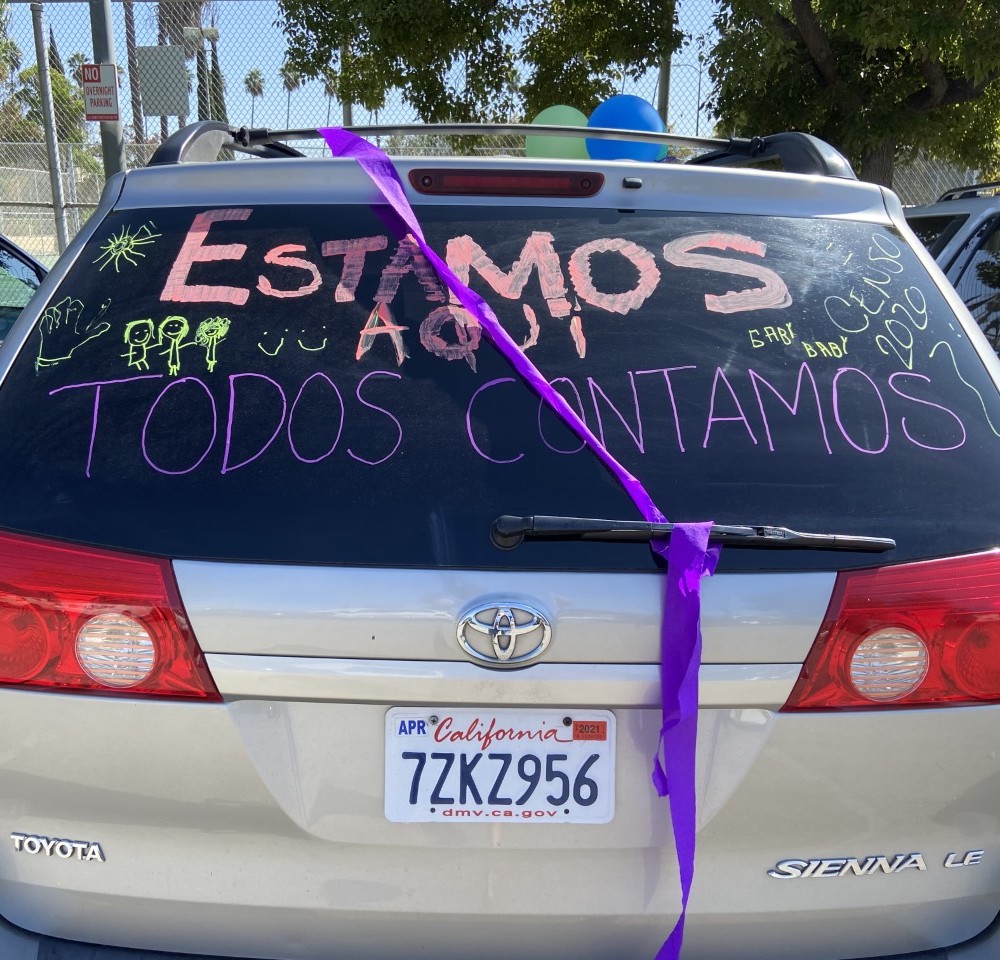 With horns honking, balloons bobbing and streamers flying, a dozen vehicles formed a caravan with a key message for the residents of East Los Angeles on a recent Saturday morning: Get counted in the census.

With just days to go until the end of the nation’s seven-month-long population count on October 5, the effort was just one of numerous caravans taking place over three days in hard-to-count neighborhoods throughout Los Angeles County. The campaign was organized by Strength Based Community Change (SBCC), a nonprofit formerly known as South Bay Center for Counseling, that focuses on community empowerment. SBCC has been a long-term First 5 grantee partner of F5LA focused on building community level change by supporting neighborhood engagement and leadership development in the 14 Best Start geographies.

The campaign’s aim was to reach people who have shied away from taking the census out of fear of deportation, mistrust of authorities or simply a lack of information. “We want to help people understand that ICE is not coming to your door and show them that it’s critical to be counted,” said Colleen Mooney, executive director of SBCC, referring to the U.S. Immigration and Customs Enforcement. 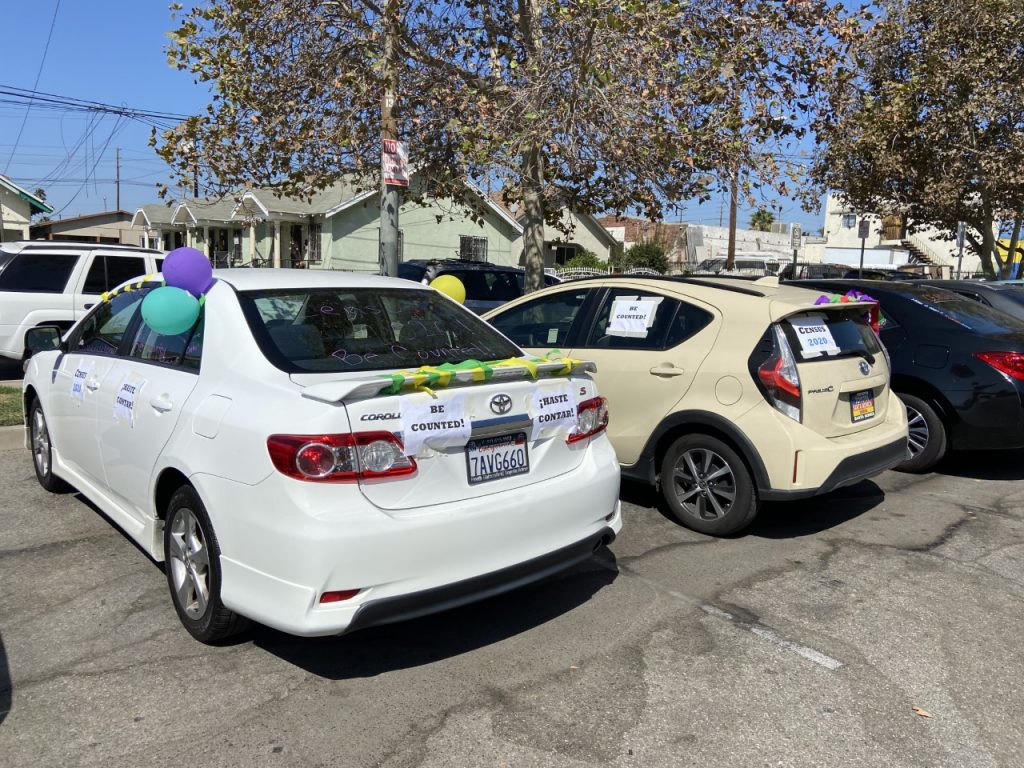 As the colorful, noisy caravan wended its way around East L.A.’s streets, curious residents came to their doors and windows. They waved and gave thumbs-up to the parade of cars, SUVs and pickup trucks that were decorated with signs in Spanish and English, with slogans such as “Be counted!” and “We all count!”

The hourlong drive ended at Ruben Salazar Park, where organizers set up a marquee tent

with information about the census, iPads cued up for people to take the census, and boxes of oranges and apples to give away.

Minutes after the tent was set up, the first pedestrians stopped by and, after organizers explained what the census was, agreed to answer questions on an iPad. Many were older people who spoke limited English and appreciated the help. “We engage with people who don’t even know what the census is all about,” said Rudy Melendez, an SBCC organizer.

Maria Leon, a member of a Best Start East Los Angeles group that formed part of the caravan, said the key was educating community members on how accurate counts of people lead to more accurate government funding decisions for health and education programs. She recalled that she had to learn what the census was many years ago.

“We tell them that every person counted means money, that it’s important, and that their information is not going to be used for anything else other than being counted,” she said.

According to the Census Bureau, children under the age of five are among those typically undercounted in the census. Other hard-to-count groups include residents of dense urban areas, immigrants and minorities. The nine-question form does not ask about immigration status.

The fact that funding for programs that benefit young children could be affected by an undercount was the key reason why Gaby Segovia, a member of Best Start Wilmington, was helping out with the East L.A. caravan. “Our fight is especially for our children,” Segovia said. “This could affect their healthy development: nutrition programs and housing, many things.”

So far, California’s self-response census rate is at 68.6 percent, which is slightly higher than that of the 2010 Census at 68.4 percent. However, L.A. County’s self-response rate of 63.9 percent is trailing 2010’s 69 percent, according to the California Census 2020.

The country’s most populous county and one of the largest geographically, sprawling over 4,000 square miles, L.A. County is considered the nation’s hardest-to-count county. A combination of demographic factors make counting the population especially hard here: numerous spoken languages, a big immigrant population, a large number of children, as well as a large stock of non-traditional housing, such as multi-unit rentals on one property, mobile homes, guesthouses, and unofficial dwellings such as garages, according to L.A. county’s census webpage. 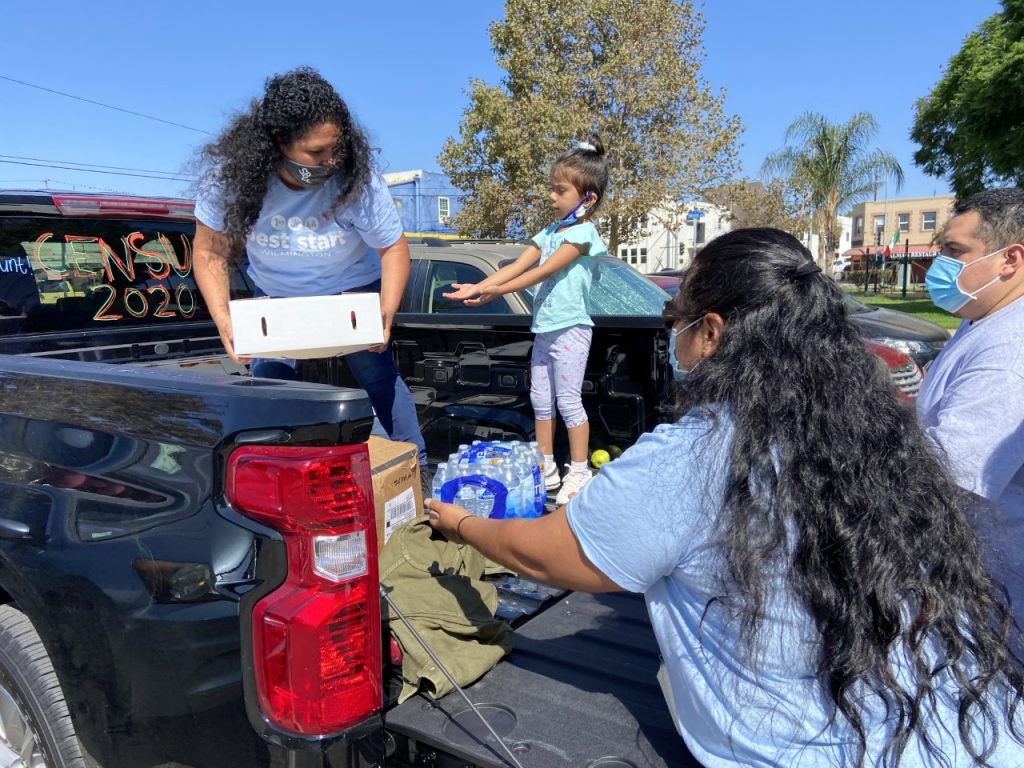 Besides federal funding for programs ranging from early childhood education to nutrition for senior citizens to infrastructure, the census also carries political ramifications as the number of congressional seats and Electoral College votes both depend upon population counts.

This year’s pandemic and the economic crisis have affected people’s voluntary participation in the census, said Nancy Gomez, a Best Start Wilmington member who was part of the East L.A. caravan. “People aren’t paying attention to it. Everyone’s focus is on surviving,” she said. “It’s made our mission three times as hard.” However, she noted that many people would do it when urged and if help was provided.

The fact that community members are urging their neighbors to fill out the census goes a long way in establishing trust so that people feel comfortable in answering the questions, Mooney said. “It’s not professional census takers doing this — it’s their neighbors,” she said. “I think that encourages people.”