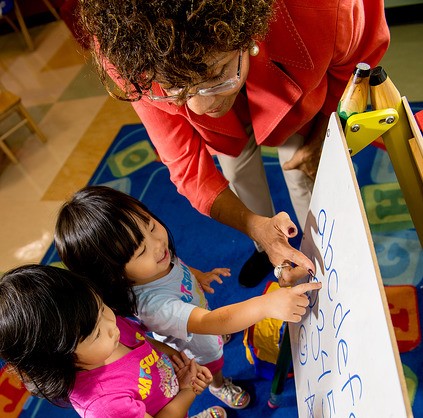 The January budget proposes to zero out
$226.8 million in planned child care spending for next year. The head of First 5 LA, a leading early childhood advocacy and public grantmaking organization, said the governor missed an opportunity to build a stronger economy for generations to come.

“The research is clear: if we fail to invest in kids’ programs, we stunt future economic growth. Now is the time to make investments that have a demonstrated rate of return,” said Kim Belshé, Executive Director
of First 5 LA. “By investing in the state’s youngest residents we can strengthen our state and build a better economy for generations to come.”

According to a new study by
Nobel Prize-winning economist James Heckman and researchers at the University of Southern California and the University of Chicago,
high-quality early childhood development programs support economic mobility for two generations by freeing working parents to increase wages over time, while their children develop a broad range of foundational skills for lifelong success.

“The research is clear: if we fail to invest in kids’ programs, we stunt future economic growth.” -Kim Belshé

The findings show high-quality early childhood programs deliver an annual return of 13 percent per child on upfront costs through better outcomes in education, health, employment and social behavior in the decades that follow.

California slashed more than $1 billion during the recession for subsidized child care programs for infants and toddlers of low-income working parents and preschool for older children. Those cuts eliminated child
care and preschool opportunities for tens of thousands of working families
.

The
California Budget and Policy Center found that Child Care and Preschool is still funded 20 percent below
pre-recession levels and that a typical single mother in California would have to spend two-thirds of her paycheck to cover child care costs. Two parents working minimum-wage jobs full time now earn “too much”
to qualify for state subsidized child care and preschool. Statewide, more than 1.2 million children eligible for subsidized child care did not receive services from state
programs in 2015.

“The Administration’s proposed budget stalls momentum on the road to recovery by undercutting hard working families and putting quality early learning opportunities out of
reach,” Belshé continued. “We know that Californians want these investments. According to recent statewide survey,
the overwhelming majority of Californians support
investments in preschool
and know that a high-quality early education experience is critical to a student’s success in school, life, and our state’s future prosperity.”

“In the
months ahead, we will continue our work with our advocacy partners, the Governor, and the Legislature to ensure our state budget better reflects the priorities of Californians. All children should have access to quality, affordable early care and
education – it’s the foundation for our state’s future prosperity,” Belshé concluded.

Advancement Project: California’s Budget Must Reflect Our Values, and Our Promises

United Way of CA: Governor’s Budget Proposal Shows Commitment to Children and Families in Education, Health and Income in a Time of Uncertainty

Children Now: California Must Step Up Support for Kids in State Budget amidst Federal Uncertainty

ABOUT THE STATE BUDGET
PROCESS

The State Constitution requires the Governor submit a budget to the Legislature by January 10. Budget subcommittees in the State Assembly and State Senate will review the
Governor’s proposed budget and begin to craft their versions of the annual spending plan.

The Legislature has the authority to approve, modify, or reject the Governor’s proposals,
add new spending or make other changes that substantially revise the budget as proposed by the Governor. The Legislature typically waits for the May Revision budget update before final budget decisions are made on major programs such as Education,
Corrections, and Health and Human Services.

The Legislature must pass a budget bill for the upcoming fiscal year by midnight on June 15. The
Governor has until June 30 to sign the budget bill into law.

ABOUT EARLY CARE AND EDUCATION IN CALIFORNIA