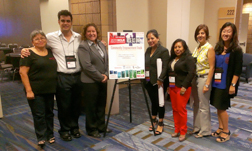 The three Best Start Metro LA mothers – along with Para Los Niños staff and First 5 LA Public Affairs Officer Freddy Lee – joined thousands of other leaders from across the nation in July at the 2013 National Council of La Raza Health Summit and Annual Conference in New Orleans, LA, to discuss the issues affecting Hispanics today with representation from the nation’s most influential individuals, organizations, institutions and companies working with Hispanic communities.

The annual conference consisted of four days of cutting-edge workshops addressing critical issues in the Latino community and presentations from speakers of national and international prominence such as Rita Moreno and Michelle Obama, who spoke on the campaign Let’s Move, focused on reducing childhood obesity rates.

The focus of the Health Summit this year was on the implementation of the Affordable Care Act and its implications for agencies serving Latino communities as well as immigrant and undocumented populations.

To better serve her fellow Best Start Metro LA parents, de Lourdes Gonzalez utilized conference resources to better inform herself about the Affordable Care Act. Many people in her community are low-income and fear they cannot afford Obamacare.

“What I’m doing is being active and being informed about the next steps of Obamacare, because what I’ve learned there are a lot of people opposed,” said de Lourdes Gonzalez. “So I interviewed agency representatives from the Obama administration at the conference about health care reform and posted it on my Facebook page to share it with other Best Start members.”

Indeed, at every single workshop or presentation the Best Start Metro LA mothers participated in, they asked important questions, shared input and addressed important issues in the dialogue.

More importantly, the Best Start Metro LA parent leaders co-facilitated a workshop with Para Los Niños entitled “The Leader Next Door” – and 30 non-profit leaders from around the nation heard their stories of leadership and growth. The workshop included a PowerPoint presentation; a participatory and dynamic activity for participants; an overview of First 5 LA, Para Los Niños and Best Start Metro LA’s work; and a parent personal success story of the impact they have experienced through their participation in Best Start Metro LA. The topics discussed in the presentation also included concepts of popular education, using an asset-based approach and project-based learning.

As a result of their involvement in the conference, many of the agency representatives the parents connected with were interested in learning more about Best Start Metro LA and invited them to their agencies to do presentations about lessons learned in coalition building. Some of the agencies included Latino Memphis, National Immigration Law Center, InterSector Partners, L3C, and Health Outreach Partners.

“I suggested that she should think about strategies she uses to involve those characteristics and qualities of the parents she works with,” Andrade said. “It’s about providing them with that support first before expecting community members to do that on their own. I do it because it’s in my heart to do this work. It’s not about the funds. Something that I’ve learned through Best Start Metro LA is that you first have to think with your heart. You have to like what you are doing before you have other types of expectations. Otherwise you lose sight of what this work is.”

For Gutierrez, the conference was yet another motivator to take the tips and tools she has learned and communicate them to her Best Start Metro LA community.

“Now I am taking the promotoras de salud (health promoter) course,” Gutierrez said. “Education, health and immigration are themes and problems that we see reflected in our communities, and Best Start Metro LA is helping to increase my knowledge about how to create positive change in the lives of everyone who requires my support, pointing them to resources and connecting them with all of the services that are offered in our communities.”