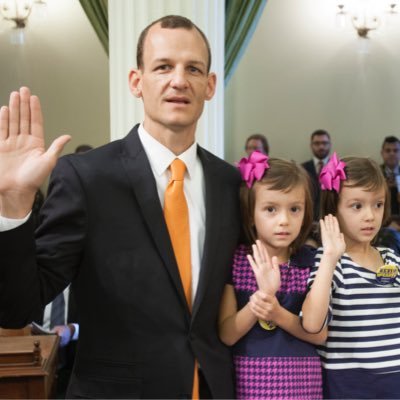 Sometimes, as a child, we cannot initially see the sacrifices our parents make for us. When they are long- haul truck drivers, serve in the military or work all day and go to night school, we only see – and feel –their absence.

Such was the early experience of a young Sacramento boy named Kevin McCarty, the son of a single mother with four children.

“It was kind of a struggle,” McCarty recalled. “She was gone the whole time. She worked at a bank right here on K Street as a teller. Then she went to school at night studying government,took care of her kids when she got home and studied in between. So I had my older sister taking care of me a lot. ”

While his mother was not always there to help him do his homework, she did leave him with a lesson that would reveal itself with age.

“I would say, later on in life, when I got to be a young adult, it really dawned on me the importance of sacrifice and education and hard work,” he said. “In those early years, it was a little bit of a detriment, but it all worked out. I’m here today, right?”

McCarty, who refers to his mother today as his “Champion for Children,” sat down to talk about his own experience with child care, his proposals to invest in early childhood education, working on similar goals with the governor, the importance of developmental screenings and how being a dad influences him. 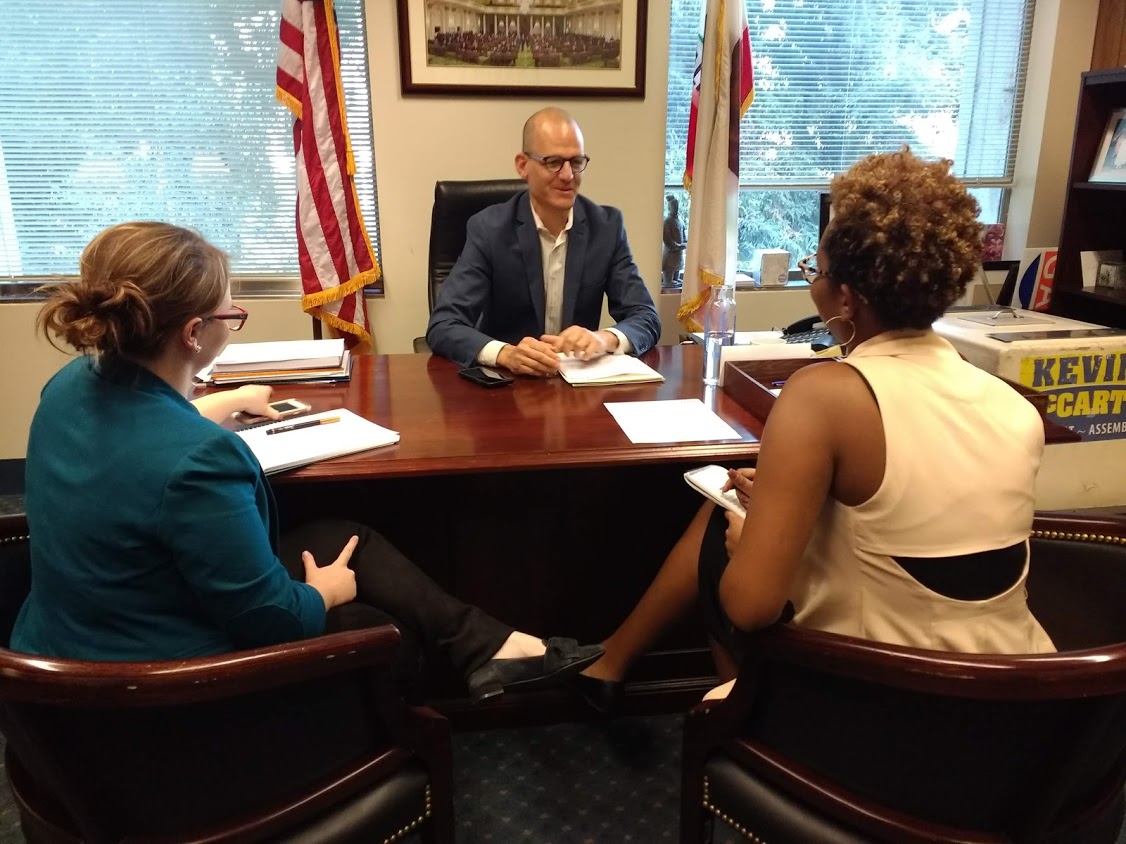 Q. Were there child care opportunities back then for your mom?

A. We actually benefited from subsidized child care after school. And she was a student at the time, so we had a subsidized pre-K program we attended at a church.

Q. During your tenure in the Assembly, what have been your most rewarding milestones as a champion to support children?

A. I would say expanding access to early education programs like the one that I participated in when I was 4 or 5 years old that expands access to low-income families who, but for that, wouldn’t have a chance to go to preschool. So we’ve been able to restore now upwards of 30 to 40,000 preschool slots and tens of thousands of other early education and child care slots in the four years I’ve been here.

Q. Last year, you carried AB 11 having to do with developmental screenings. My understanding is you plan to reintroduce it again this year.Why is this policy issue important to you?

A. I think it is prevention. What’s the saying? An ounce of prevention is worth a pound of cure. So we know that there are a lot of challenges with young kids and there are interventions and education programs to get kids on the right track, especially kids with learning disabilities who have had instances in their life of adverse childhood impacts, toxic stress, and there are clearly interventions that could be addressed early on which make it less costly in the out years. But in order to find those interventions, identify the kids and their needs, you have to have appropriate screenings. So that’s why we’ve been pushing the increased screening agenda in California.

Q. How do you see your role as the chair of the Assembly Budget subcommittee on Education Finance in shaping young children’s futures?

It’s the position that allows me to put forward priorities on behalf of the entire Assembly, not just my priorities, on making sure we invest in our most important asset: our kids, our future. I view that as investing from early education all the way through higher education. The jurisdiction we have is child care, early education programs, Pre-K, K-12 schools and higher education. So I call it a “P through 16 agenda.”

Q. You recently introduced a package of early childhood development legislation related to targeted universal preschool, facilities, and provider reimbursement rates. Why are these issues important to you?

A. There’s a big picture answer and a narrower one. I’ll get to the narrow first. Why we’re doing the proposal is to expand access for Pre-K for 3- and 4-year olds who don’t have access today and who need the help before they enter kindergarten. So the three proposals are needed because we want to fund more slots to serve this unmet need in California. But you can’t just expand the slots. That second and third bill relate to making the first bill work. The second bill is dealing with facilities to house those slots. The third bill is dealing with a reimbursement rate structure and the compensation for the workforce to make those slots viable and high quality as well. So it’s kind of a package there.

The big picture as to why we’re pushing this is that early education matters. If you look at the top issues that California is facing and trying to tackle, I put these issues in three buckets. One is trying to address poverty, specifically childhood poverty. The second bucket we’re trying to tackle is our education achievement gap, especially with low-income students of color. We have a lingering achievement gap and it’s a disappointing one, as well. The third issue is our criminal justice system, the school to prison pipeline, and the issues we’re trying to address with criminal justice reform.

If you look at those three challenges, when you ask top researchers and economists, “What’s the top thing that you could do to address any of these three issues?”, they all come up with the same solution: education. So it comes back to ECE matters and that’s why it’s such a priority for me and for the legislature. And we’re excited to see it’s a top priority for our new governor. 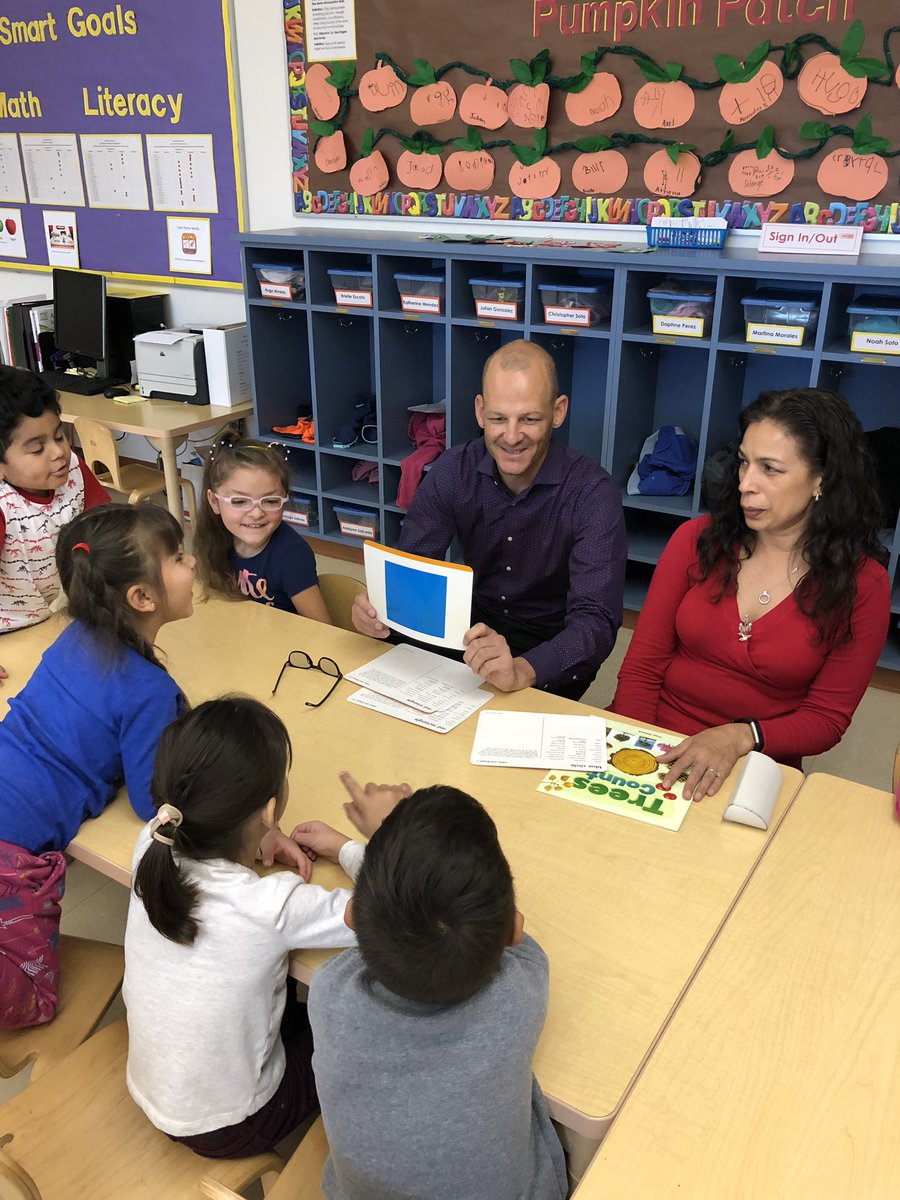 Q. Why is now the best time for the state to invest in children?

A. Why now? Every year is the best time to invest in children. I think the key question is why now is it becoming a ripe issue? I think in large part that comes with our new governor. First and foremost, he has little kids at home, so he sees the benefit of early education and early learning. But he’s been pushing this issue as mayor, as Lt. Governor and on the campaign trail. So he’s really elevated the issue front and center. And we have a little bit of money in the state budget, a little flexibility to do something. And so I think that the window has never been more open to really step up on this front for California. And speaking of California, you read all the time about other states who are stepping up on this issue and California is behind. In California, we’re proud of ourselves in regards to environmental issues, climate change, immigration, civil rights, a lot of these other issues. But on this issue, we’re actually behind.

Q. But why should Californians who don’t have kids care about investing in children?

A. Every year in our country, people get something in the mail from the Social Security Administration. It says if you retired today, you’ll get X amount of money. The amount of money you pay into social security. On the back is a little asterisk and it says essentially: this is conditional on the next generation paying into the fund. So in order for our economy to grow and to be solvent and for our social security or our social compact to work, you need the next generation to thrive, as well. So that’s why it should be important to anybody in California or the country, if they have kids or if they don’t have kids.

Q. What are your initial thoughts on Gov. Newsom’s budget proposals for improving lives of children and families? And how do you plan to work with him?

A. I’m very pleased so far. It’s a good blueprint. It’s still winterand we don’t finalize the budget until summer. It talks about the right issues: early education, infant and toddler programs, Pre-K, our K-12 schools, after-school programs, higher education. Our job is to fine-tune the proposal over the next few months.

Q. There seems to be a lot of parallels between your priorities and his.

A. The elements are there, the details are not a 100 percent aligned to the “T”, but I think by a large part we’re on the same page. Going forward, I look forward to bridging the gap even further.

Q. How has being the father of two young daughters shaped your legislative priorities?

A. For preschool, it’s simple. They had three years of early education. It was a full day, full year, high- quality programming. It’s not cheap and so I see how much it costs for families, but our kids are thriving in fourth grade and they were reading and thriving in preschool. It was that preschool experience. So I think it just reminds me of the benefits, why it matters. And it makes me sad because I realize how many kids go to kindergarten without even one year of Pre-K. It makes a difference. It also reminds us that too many California families don’t have the money. Or they don’t live in the right communities that offer programs, even if you do have the money in the budget for them. So they go without. And we see that too many kids start kindergarten behind and they stay behind for years and that’s why we have our achievement gap. It relates to families being stuck in intergenerational poverty and it has a relationship to our pipeline to our criminal justice system.