Thirty Days and Nights in the NICU 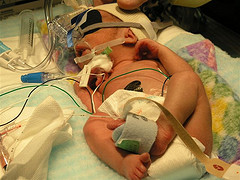 During an emergency, a hospital can be both the friendliest — and scariest — place on Earth.

Our son, Louis, was born more than eight weeks early. On the third day after his birth, both he and my wife were fighting for their lives in different parts of the hospital: my wife in the maternity ward and Louis with other preemies in incubators in the neonatal intensive care unit (NICU) a few floors up.

I felt dizzy that afternoon as I walked through one of the long hallways that lead to the NICU, where the doctors had summoned me to sign a waiver for an urgent procedure on Louis. He was too small and underdeveloped to eat and digest normally, so they had to feed him with an intravenous needle. But his veins were so small and fragile that they burst each time doctors tried to insert one in his arm.

The solution was to insert a needle into a large artery on the top of his head. I was scared, despite the doctor’s assurances. Little Louis, still weighing less that three pounds, was a fighter. But a decision had to be made soon because he would quickly dehydrate without the feeding line. One of the parents had to sign off, and I was the only one available.

Downstairs, my wife was fighting her own battle. The aftermath of the severe preeclampsia that led to the early birth also put her life at risk.

Not so in my wife’s case.

After the birth, her blood pressure continued to rise. The doctors struggled to get it down with increasingly large doses of powerful drugs that brought her pressure dangerously low and put her at risk of going into a coma.

On that third day, I was keeping my wife company as she brushed her teeth. Suddenly, her words were slurring and she was wobbling. She called out my name and I reached out and grabbed hold of her just as she passed out and fell backward. I struggled to carry her to her bed before calling the doctor, who revived her with another powerful shot.

Neither of us got much sleep. My wife was too ill to go see Louis, so she worried about him constantly. My time was spent going back and forth between floors to check on mom and baby. I brought by wife photos of Louis, and I brought Louis freshly pumped breast milk.

Back at the NICU, I signed the waiver, kissed Louis’s forehead, and then broke down and cried as I watched the doctors put the needle in. I wandered out into the hallway in a daze. I thought of my wife downstairs and how desperate she was to see our son.

Then my cell phone rang. My brother-in-law helped me pull it together with some words of encouragement. I went back to the NICU and asked the nurse to call the hospital priest on duty. He came right up, blessed our son, and comforted me.

My instinct and my pride made me want to just hang tough and handle the situation on my own, as I’m sure many other dads out there try to do. I didn’t realize the good it did me to be able to talk about my stress with someone until weeks later, as I looked back on it all.

My wife was finally able to check out of the hospital a week later, and we spent the next month visiting our son and watching him double in weight. Other babies in the NICU weren’t as fortunate, and we watched as several had to have emergency surgeries.

When the day finally came to take Louis home, our joy in moving on was mixed with just a little sadness for leaving what had become our second home and the people who helped us through the toughest month of our lives.

I’m lucky because I had people who reached out to me. A dependable place to get support as a parent is the National Parent Helpline: http://www.nationalparenthelpline.org or 1-855-4AParent. Also, most hospitals have a case worker assigned to new parents, and they are a great source for referrals.