While screens are part of life for nearly everyone, our screen habits — and the parenting choices we make with screens — can have a real impact on our families and a child’s development. Repeated studies have found that children’s screen use is linked to obesity, poor vision, poor sleep/concentration and issues with behavior, mental health and fine motor skill development.

According to a study by the nonprofit Common Sense Media, the amount of time children ages 8 and under spend on mobile devices has tripled in four years — from an average of 15 minutes per day in 2013 to 48 minutes a day in 2017. Children from lower-income homes spend more than twice as much time watching screens as children from higher-income homes. For close to half of all households surveyed, television is turned on “always” or “most of the time.”

Experts report that, when watched more than sparingly, even educational content may adversely impact a child’s development because the experience of “swiping” or passively watching does not stimulate the brain in the same way as actively engaging with other people. Human interaction is vital for learning and growing. This is especially important for the first five years of life, when the brain grows more than at any other period.

The American Academy of Pediatrics recommends that children under the age of 18–24 months do not view screens other than for video chatting. For children ages 2–5, they recommend limiting screen use to an hour a day of high-quality programming and say parents should watch with their children. (If a child learns something from a screen, you can reinforce it later by talking about it with them.)

Creating family guidelines about media use, establishing “screen-free zones” in the house and at different times of the day, turning off background TV (which may harm concentration and learning) and setting limits for yourself can help you and your family feel more in control of your screen usage.
Related Topics: Screen-Free Week / Mental Health 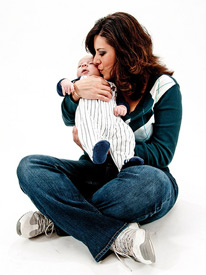