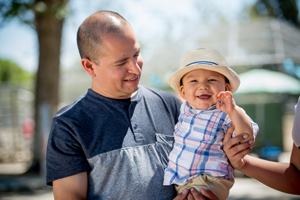 Why do dads need to push a broom every now and then? What impact does fatherhood have on teenage pregnancy? Do children do better with one dad – or two? Just in time for Father’s Day, read these answers and more from recent research on the impact of fatherhood on children – confirming the significance of its unique parenting role and challenging some traditional assumptions.

Push a Broom, Break a Stereotype

Dads, if you want to see your daughters grow up to achieve success, then start at home by breaking a stereotype. Researchers from Canada’s University of British Columbia concluded from their 2014 study that fathers who help with household chores are more likely to raise daughters who aspire to less traditional and higher-paying careers, compared to fathers with more traditional gender-specific beliefs about domestic labor. This influence was even greater when moms reported doing relatively less domestic work or defined themselves as more work-oriented.

Writer Paul Raeburn’s 2014 book “Do Fathers Matter? What Science Is Telling Us About the Overlooked Parent” examines the impact that an active, present father has on his children. According to a PBS NewsHour article by Rebecca Jacobson, Raeburn found research from California State University, Fullerton that showed sons with fond memories of their dads were better able to handle day-to-day stress. Raeburn also reported that a father’s presence during his daughter’s childhood influences her sexual development, physically and psychologically. Studies by Dr. Bruce J. Ellis at the University of Arizona found that when fathers had a close relationship with their daughters in the first five to seven years of life, they engaged in sex at a later age and had a lower risk of teen pregnancy.

In the past 20 years, the number of fathers staying at home with their kids has skyrocketed, from 1.1 million in 1989 to nearly 2 million today, according to a 2014 study from the Pew Research Center. The research also revealed that almost half of those 2 million live in poverty, which breaks the stereotype of the highly-educated father staying at home so the wife can focus on her career. Read more on this joint study by Brigham Young University and Utah State University here.

Research Reveals Need for Updates to Fatherhood/Parenting Policies and Practices

A 2014 White House blog report concludes from a collection of studies and statistics that changes in the role of the modern father suggest the need for an overhaul in common policies and business best practices, such as paid leave and workplace flexibility, which helps mothers and fathers better balance the competing demands of work and caregiving. The article, entitled “The Changing Role of Fathers in the Workforce and Family,” referenced numerous studies that substantiate this growing need.

A May 2014 study showed that gay dads’ brains show activity that simulates the traditional mom-dad parenting roles. This Reuters article on the study showed that gay fathers raising children with their husbands have modified brain activity that aids them in serving both mom and dad roles. For example, their emotional brain circuitry is as active as those of a mom, even as interpretive circuits showed the same extra activity as what is found in the brain activity of heterosexual fathers. As both a father of three young kids and the blog editor for the Los Angeles Dads...

Celebrities aren't the only ones with ideas for spending time with young children....

Being a dad is an important responsibility that most fathers have to learn on their... Studies consistently show that fathers who are committed to being involved in their...