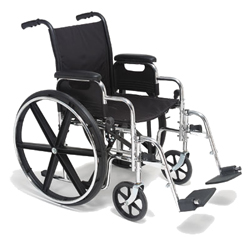 As First 5 LA develops its new five-year strategic plan and governance guidelines to help advise Commissioners on the initiatives and programs they will fund in the future, we thought we would take a look at some First 5 LA's recent success stories among grantees. Here is one such narrative.

J.F. was not your typical 4-yearold. The little boy was confined to a wheelchair when he was enrolled in the School Readiness program of the Children's Center of the Antelope Valley, or CCAV, in August of 2012.

When J.F. became eligible to attend preschool, his mother was hesitant to enroll him because of his disabilities and having to utilize a wheelchair. CCAV's home-based specialist worked with the mother, encouraging her to consider the benefits J.F. would receive from attending preschool; not only from academics, but from socializing with his peers, as well. The mother was concerned J.F. would be teased, wouldn't be cared for properly and would not be able to handle going to school.

After much conversation and thought, J.F.'s mother decided to give it a try. J.F.'s first couple of days were trying as there was no paraeducator to assist him with maneuvering around the classroom and the school. The school informed the mother it would take a while to hire someone to be able to work one-on-one with J.F. At this point, the mother was ready to take J.F. out of school.

Again, with the assistance of the home-based specialist, J.F.'s mom was able to volunteer to assist in the classroom until appropriate staff was hired. After several weeks and a lot of anxiety from mom, J.F. received a paraeducator to assist him in school. He was accepted by his peers.

Today, J.F. is doing exceptionally well in school. He and his mother look forward to school days, and the mother has stated to the home-based specialist that she wouldn't have done all this had it not been for the information and encouragement she had gotten from First 5 LA's program.

This story is significant because J.F.'s mother was not entertaining the idea of "typical" schooling for J.F.; she often worried what would happen to him. The mother has found that the school system was willing to partner with her to get her son the best education possible. CCAV's School Readiness program received informal recognition from the parent. And, quite frankly, that thanks was more than enough.