Throughout life, you are your child’s first and most important teacher. Learning starts at birth, so every time you speak, read or sing to your baby you are helping to build early language skills. These skills are the foundation for reading, writing and other communication in the future.

Sharing facts about inspiring role models and historical events is a way to help your child learn about the world. It is also a way to share the idea that someday he or she might do something great that inspires others. In celebration of African-American History Month, First 5 LA is highlighting Mae Jemison, a remarkable woman whose early interest in science and medicine led her to become an astronaut!

In 2005 Mae said, “My parents were the best scientists I knew, because they were always asking questions.” To honor Mae – and the encouragement of her parents – we are pleased to offer information, teaching ideas and fun activities for you and your child to share.

Mae Jemison was born in Alabama on October 17, 1956 and moved to Chicago shortly thereafter. It was evident from a young age that Mae was curious and loved to learn. As a young girl she dreamed of a career in science and becoming a doctor or astronaut. Mae was also a talented dancer and even considered becoming a professional. While it was rare for women to work in science in the 1960s and 1970s, it was even rarer for African-American women. That didn’t stop Mae from pursuing her interests. Inspired by Martin Luther King, Jr. and his determination to break down barriers, Mae graduated from high school early. She was accepted into Stanford University at the age of 16.

At age 20, Mae graduated from Stanford with a degree in chemical engineering. She went on to get her M.D. from Cornell Medical College and served as a medical doctor for the Peace Corps in Africa. She once saved a patient dying of meningitis, caring for them for 52 hours straight!

Going to space was still one of Mae’s biggest dreams. In 1986 she was accepted into the NASA astronaut program. She worked at the Kennedy Space Station on vehicle launches and computer software verification. On September 12, 1992, Mae became the first African-American woman to travel in space when she logged over 190 hours on the Space Shuttle Endeavour. Mae even got to see her hometown of Chicago from space. It was a full-circle accomplishment for the girl who was determined to become an astronaut one day.

Make your very own space art! This is the order of the planets in distance from the sun: Mercury, Venus, Earth, Mars, Jupiter, Saturn, Uranus and Neptune. Start by painting the sun on one end of the paper. Paint or draw each planet in order of how close to the sun they are. Use Planets for Kids to look up how big each planet is in relation to each other.

On a clear night, go outside and take a look at the stars. Can you see the craters on the moon? What phase is the moon in? What constellations can you see? At certain times, you can even see other planets! You can also find out when and where to see planets in the night sky. Mae Among the Stars by Roda Ahmed, illustrated by Stasia Burrington

When Mae Jemison was a little girl, she dreamed of becoming an astronaut. This charming picture book details her inspiring journey all the way to her very first space flight. This is a great book to inspire boys and girls like Mae to follow their dreams. What’s Out There? A Book About Space by Lynn Wilson, illustrated by Paige Billin-Frye

What are the sun, moon and stars made of? What are the other planets like? What’s out there in space? For young astronauts this informative, yet easy-to-read book is a perfect introduction to space. 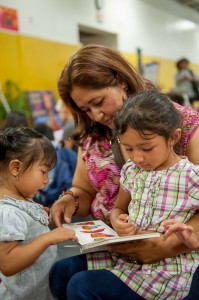 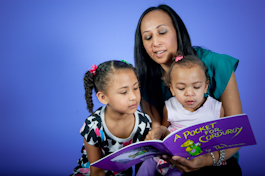 When children listen to a parent or teacher read a story, they are often looking...