Originally penned by Augustin Duran, translated and reprinted with permission.

During the process of learning how to write in order to identify more clearly the problems that the community experiences, a group of women, all immigrants with children, some single mothers, and with the weight of the social problems that there are in South Los Angeles on their shoulders, found their voice to be able to speak out against the things that limit them, affect them and keep them from moving forward.

Veronica Corona, mother of three, was part of the two-month workshop given by Best Start Metro L.A. a few weeks ago.

She has always been concerned with the education of young people, but she didn’t know what to do to help the children that sometimes can be found in the allies around San Pedro Avenue and who, in many cases, end up dropping out of school.

Thanks to the workshop, Corona finished her first story, in which she portrayed the problem with education in her area. She also got up the courage to ask the school authorities once, twice, three times, until they gave her an answer; she looked on the internet and was able to learn how to download information from the Los Angeles Unified School District (LAUSD) webpage.

The idea is to get people together from an area so that they can share their ideas with each other and create a vision of a better community for families with children under 5. -Fabiola Montiel, Best Start Metro LA Communications Officer

Unfortunately, through her research, she discovered that the six schools with the highest school drop-out rates are in South Los Angeles, where she has lived for two years.

Additionally, she no longer blames the youth for not wanting to continue their studies; she blames the parents and the system.

Corona confirmed that, in regards to education, the people with the most power are the parents; but this power goes unused if they don’t participate in the schools.

In the final class, Corona couldn’t hold it in, and just apologized as she shared her challenges and discussed some of the history of the problem as it related to the youth.

“I’m crying because there are so many unknown stories and so many futures that could be changed, but not enough is done to help these young people,” said Corona, a native of Guanajuato, Mexico.

At this last meeting, the participants brought the final draft of the stories they wrote based on the problems that most concern them in the community. With the help of their teacher Eileen Truax, journalist and writer, the women spoke of domestic violence, sexual abuse, education and gangs, among other topics.

Truax listened to them; she made suggestions and shared with them some of the techniques for narrating and writing for a newspaper, such as where to find the information and how to express it in an easier and more effective way.

There was even a moment when the workshop turned into a type of therapy for the participants, since in some way, the women seemed to find the courage to talk about things that they had never dared talk about before.

Truax emphasized the group’s level of commitment and the women’s attitude of wanting to progress and change, not only for their families but for the entire community. 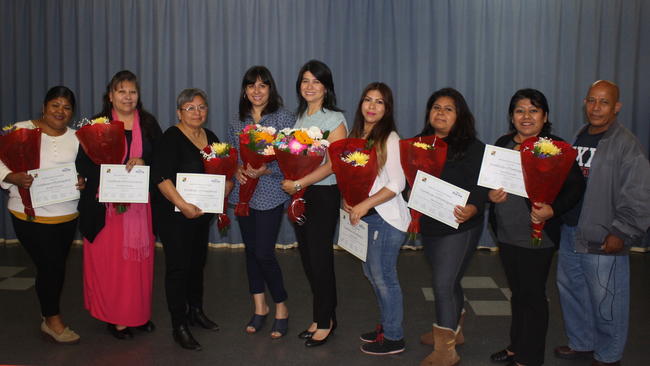 “We are talking about women who are mothers of small children, one of them has five children! They come from surroundings that haven’t always been the best for their personal development and they live in conditions that don’t make it easy for them to dedicate their time to volunteer work. And they do it anyway; they commit, they stretch themselves, they give the best part of themselves. Many of them had never written anything. Many of them aren’t used to reading. But they did it, they overcome their fear and turned their community volunteer experience into an experience of personal growth.”

The teacher added that generally people think that the solutions to the community’s problems lie in the politicians or in the leaders of organizations. However, she makes sure that the program participants demonstrate that the power lies in the hands of the people.

“We are [all] capable of identifying urgent topics, speaking with our neighbors, doing researching, asking questions, suggesting alternatives. If all of us were to get involved like these women did during these two months, we would have a better future within our reach,” stressed Truax.

Fabiola Montiel, representative from First 5 LA’s Best Start program, said that one of the workshop’s objectives is to give the community leaders the tools they need to identify the problems in the area.

“The idea is to get people together from an area so that they can share their ideas with each other and create a vision of a better community for families with children under 5,” said Montiel.

The articles written by the participants will be printed for distribution to the nearly 500 members that currently make up the six Neighborhood Leadership Groups organized and supported by Best Start Metro LA.

Geodeowon Nagash was the only man who participated in the program.

Zitlali Rosado: Mothers that do not work