What online strategies are most effective in engaging families to take action?

That question was at the heart of The South LA Online Convening: Counting Us in the 2020 Census, a web-based event co-hosted by First 5 LA and Community Coalition (CoCo). The April 9 gathering brought together a mix of advocates and community partners eager to discuss how best to ensure that South LA residents — especially children prenatal to age 5, a historically hard-to-count population — are counted in the census.

The nature of that discussion has changed significantly in the last few weeks, much like the convening itself, which was initially conceived as an in-person gathering. But on March 11 — just two days before the event — the L.A. County Department of Public Health announced the first death from COVID-19, and the world quickly changed.

“We were expecting over 100 service providers to attend,” said CoCo Director of Civic Engagement and event moderator Kirk Samuels of the original in-person gathering at CoCo’s offices. “But with so much shifting daily — hourly even — we made the tough decision to postpone our event to ensure we were in compliance with local governing bodies.” 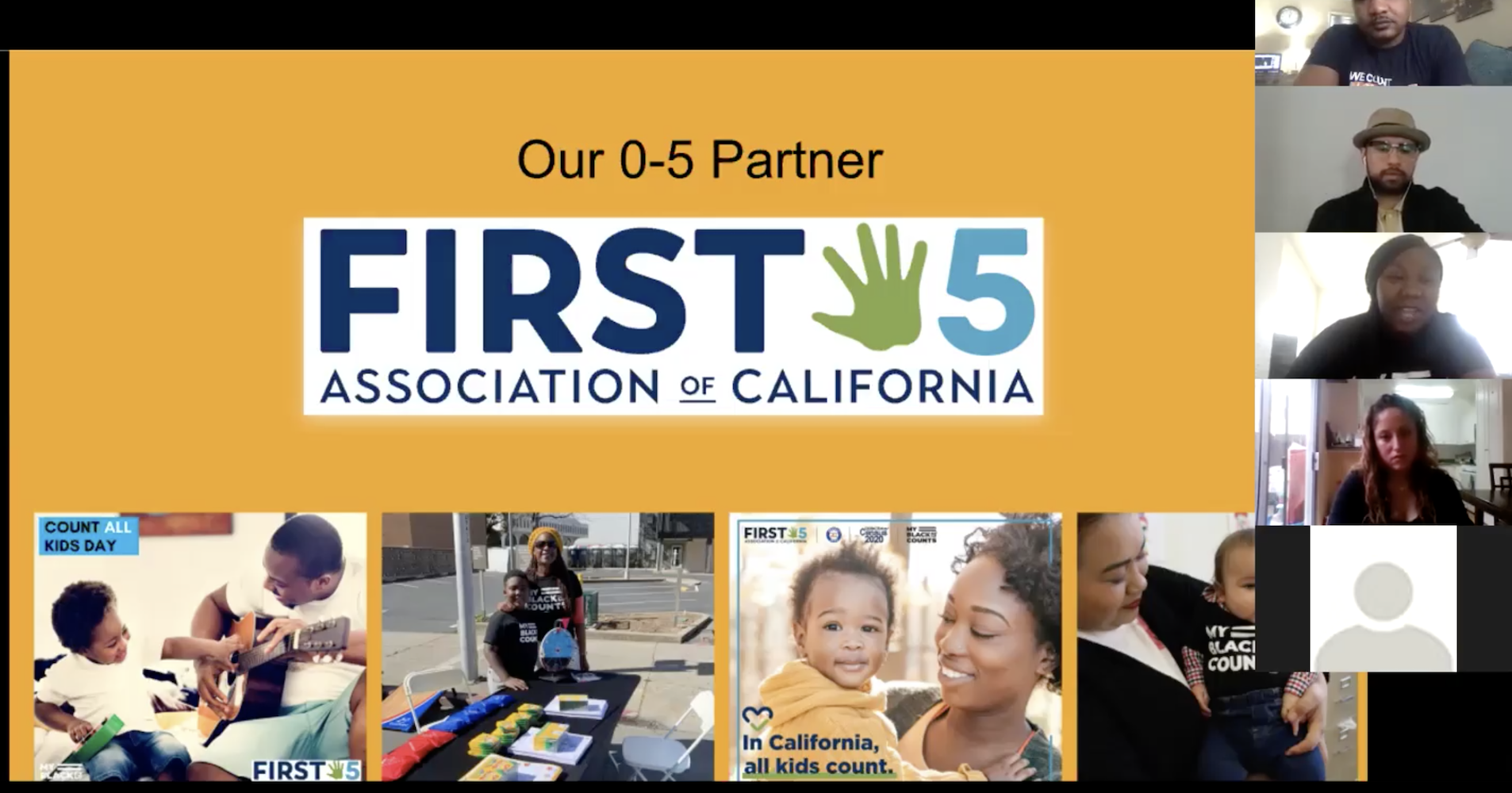 As L.A. County began implementing its Safer-at-Home Order, CoCo staff and First 5 LA’s Communities team set about repurposing the canceled event as an online gathering that would address the challenges of the rapidly changing environment. As a result, the online panel discussion centered not just on the importance of participating in the census and the difficulties in counting young children of color, but on new outreach and education tactics being employed due to social distancing practices.

Undercounting young children. Children ages 5 and under have been undercounted in the census for decades. According to The Leadership Conference Education Fund, the net undercount rate for young children in the 2010 Census was 4.6 percent, much higher than the rate for any other age group. Even compared to children in different age groups, those under 5 years old are more likely to be missing from the final census tally. This undercount has only grown worse over time; from 1980 to 2010, the percentage of young children who were not counted has increased from 1.4 percent to 4.6 percent. During the last census, an estimated 210,000 children under 5 were left uncounted in California.

Panelist Lanae Norwood, the strategic communications lead at the California Black Census & Redistricting Hub, stressed the importance of reaching out to families of color with young children to reverse the trend. Latino and black children, she noted, were severely undercounted in the 2010 census. The disparity was especially deep for young black children, who were undercounted by as much as 7 percent — roughly twice the rate for young non-Hispanic white children.

Norwood also highlighted some of the barriers in counting young children. For instance, shifts in housing security due to gentrification and other factors have led to a diminishing overlap between the concepts of “family” and “household.” Family members may be spread out over several households, while a single household might have more than one family in residence. This may cause confusion regarding who should be included when a household member is completing the census survey.

Another element of confusion that might lead to an undercount of young children is the growing diversity of family structures. LGBTQ families, multi-generational households, unmarried partners, blended families, co-parenting arrangements and co-residence with grandparents were just a few of the complex household relationships identified.

“People don’t know how to respond because a relationship is not legally recognized,” Norwood stated. “But the census is not just a count of your immediate family — it’s an account of everyone living in your home.”

The panelists also discussed how the failure to count young children affects entire communities. Census data is used to distribute federal funding — as much as $1.5 trillion — across the states for as many as 55 programs vital to working-class and low-income families. 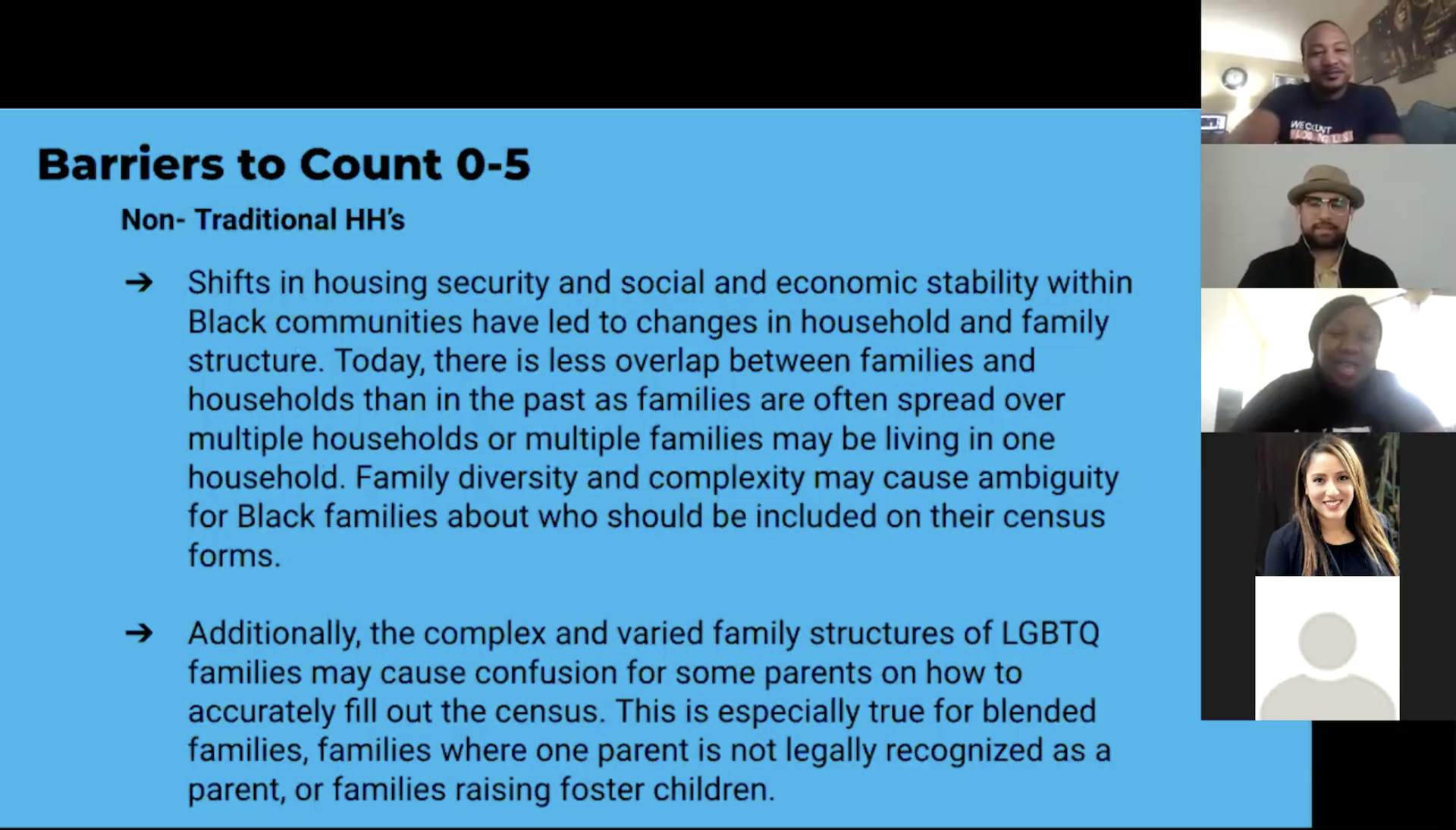 New tactics for engagement. Noting that the shelter-at-home orders have fundamentally changed how outreach is being done, moderator Kirk Samuels asked panelists what strategies they were adopting to engage hard-to-count populations. Among their recommendations:

Develop An Online Strategy. In partnership with the First 5 Association, Lanae Norwood and her team had previously been successful in engaging black families with young children at large, in-person events, such as the Black Joy Parade in Oakland. But shortly after COVID-19 struck, they quickly refocused their efforts. Recognizing that 9 out of 10 African Americans in California were on Facebook, they began investing in a rigorous and broad digital strategy that helped them connect with people on Facebook.

“They ‘re already following friends and family and loved ones,” Norwood explained. “So how can we engage them in the space they’re already in — not just to take the census, but to join us in helping to spread the word?”

Panelist Gio Hernandez, the senior census program manager at the NALEO Educational Fund, agreed with the focus on an online strategy, especially the need to develop new content. Census materials, such as bite-sized videos and graphics, have the ability to go viral and spread census messages further and faster.

Utilize Relational Organizing. Developed for political campaigning purposes, the practice of relational organizing relies on leveraging pre-existing personal relationships with friends, neighbors and colleagues and asking them to reach out to people in their networks with personalized requests. Panelist Alejandra Ramirez-Zarate, a policy and research analyst at Advancement Project California, described developing her own personal phone bank tree, where she asked people in her network to complete the census and then encouraged them to reach out to five other individuals in their networks to do the same. Using this strategy, she has been able to reach 45 households so far.

An online engagement strategy, Norwood added, could be further enhanced by relational organizing. In their work reaching out to people through Facebook, she and her team asked people for help in engaging others.

Norwood said, “We tell them, ‘Our hands are bound, we have a shelter-in place-order. Some of your loved ones, some of your neighbors, people you may know — we may not be able to reach them in the next coming weeks. Will you join us in spreading the word?’” 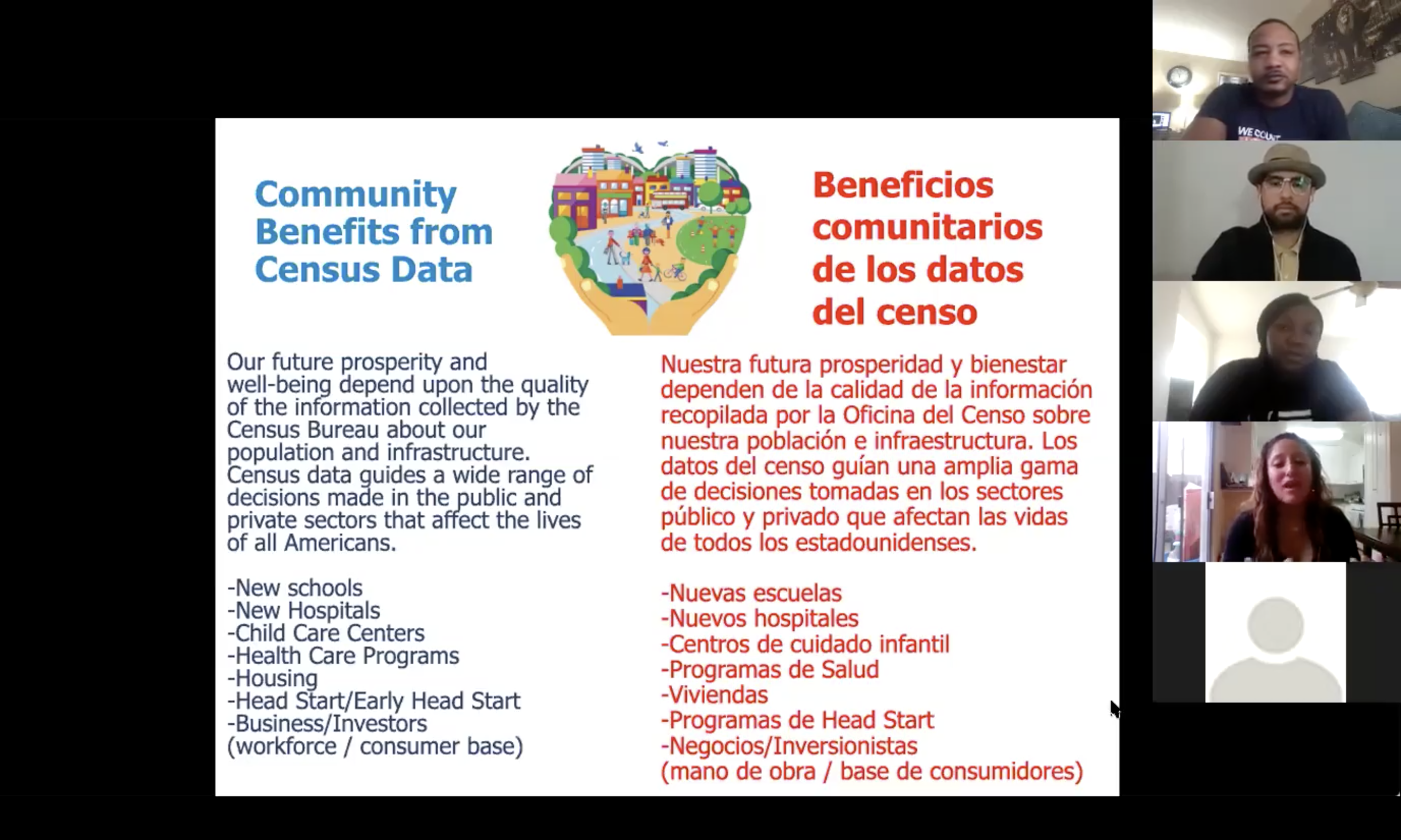 Identify influencers. Another strategy that Norwood’s team is incorporating into their virtual advocacy entails leveraging the ability of leaders to act as online influencers in their respective communities.

“There are just certain people that are tapped into the heartbeat of communities of color,” she said. “People trust (them) — they know their voice, they follow them online for different reasons.” These influencers can help encourage others to complete the census, as well as dispel fear and misinformation about the process.

Go Offline. Despite social distancing and stay-at-home orders, there are still opportunities to spread the word beyond the digital space. Panelists pointed to ongoing initiatives such as grab-and-go food centers, mutual aid food drop-offs and other COVID-19 relief efforts where census engagement literature and other materials could be included in distributed packages.

In the end, there was consensus among the panelists about the potential power of interpersonal relationships to engage a more significant number of people in the census, especially in a COVID-19 context. Norwood summed it up in her own words.

“My words to my loved ones carry so much more weight than a flyer, a Facebook ad or a call from a virtual phone bank,” she said. “We need to use the power of our people, our communities, our relationships to make sure we are talking to everyone about the census.”

For more information about the 2020 U.S. Census, please visit: https://www.first5la.org/parenting/census/

The deaths of unarmed African Americans George Floyd, Breonna Taylor and Ahmaud Arbery and the racial-targeting of Christian Cooper and Omar Jimenez are all tragedies from the extreme to the life-altering that make painfully plain the persistent, systemic inequities that have consequences, both seen and unseen.

It hurts to know that these are not individual or isolated incidents. These acts illustrate the historic and systemic barriers to equity and opportunity faced by African Americans and other people of color.

No one should have to fear for their lives because of the color of their skin. No parent should have to worry for their child’s safety and well-being when they venture outside of their home. No community should disproportionately bear the health, economic and social burden of the COVID-19 pandemic.

First 5 LA stands firmly against racism, oppression and inequality in all of its forms. We stand in solidarity with those who pursue equity, justice, human dignity for all, and an end to racism. We recommit ourselves to be a part of solutions that continue to move toward addressing what’s wrong in our society.

Yes, we have to know our lane is kids. We also have to know what else is on the road and what barriers exist which hinder more equitable outcomes for young children and their families. We have to ask ourselves - and others – why is it happening and how can we change it?

Our work is about seeing inequity and doing something about it.

It’s important for us to recognize the events that are unfolding, the root causes of why the protests and unrest across our communities are happening, and concrete steps to effect change. Yes, this a moment for empathy, listening, and deep reflection - personally and organizationally. And, it’s a moment for intentional and meaningful action – action that reflects our shared humanity.

At First 5 LA, we’re dedicated to diversity, equity and inclusion in our work and within our organization’s culture. We do so - made real by partnering with parents and leaders at the local, County and state level to change the conditions that affect child development and family well-being.

To make progress, we have to shift the conditions that hold a problem in place. And doing this means making the early learning, child health and family strengthening systems that focus on families, work for families, including families of color.

We are committed to listening carefully to our many partners – parents, family-serving organizations, contracted partners – regarding the barriers that hold inequities in place and opportunities for First 5 LA to strengthen community assets and advance shared strategies.

Our work together has never been more important. We can and must do more to stand up, speak out, and stand with those who share our commitment to a just, equitable and safe Los Angeles.