“We’re afraid,” Melissa Franklin confessed to the audience. “Of getting pregnant. Of having children. Because we’re afraid of dying.”

Designed as an annual day of learning, collaboration and action, this year’s summit centered on the disparity in birth outcomes for black mothers and babies. Sessions explored topics such as the root causes of racial inequity in health care, efforts to prevent premature births, statewide birth equity initiatives, doula and midwifery care, community and family partnerships and trainings to reduce racial bias in health care.

While the number of infant deaths in the U.S. has dropped over the last two decades, significant disparities remain today:

The data are equally bleak for their mothers:

Until recently, these disparities were linked to a number of factors such as poverty, poor maternal health and inadequate access to prenatal care. However, a growing body of research now reveals that racism plays a major role. This underlying factor was raised throughout the summit, where several panelists spoke of their pregnancy experiences in a healthcare system where they routinely felt unseen and unheard, with concerns frequently brushed off and not taken into consideration by medical professionals.

In its 2018 Action Plan, the L.A. County Department of Public Health (DPH) pointed to data suggesting a pathway that connects an individual's social experience to poor health and birth outcomes via exposure to chronic stress. This pathway –– often referred to as “weathering” to evoke the experience of erosion caused by experiences of racism on a daily basis — was the common experience shared by black women across lines of class, education, and maternal attitudes and behaviors.

"The conversation has evolved at different rates," said DPH Deputy Director Deborah Allen, when asked about the growing emphasis on the role of racism. "Ten, fifteen years ago, they were saying we need to look at the genetic causes of disparities in birth outcomes… The clarity with which people are talking about racism, rather than just racial disparities, is qualitatively new. It’s taken over the conversation in new ways.” 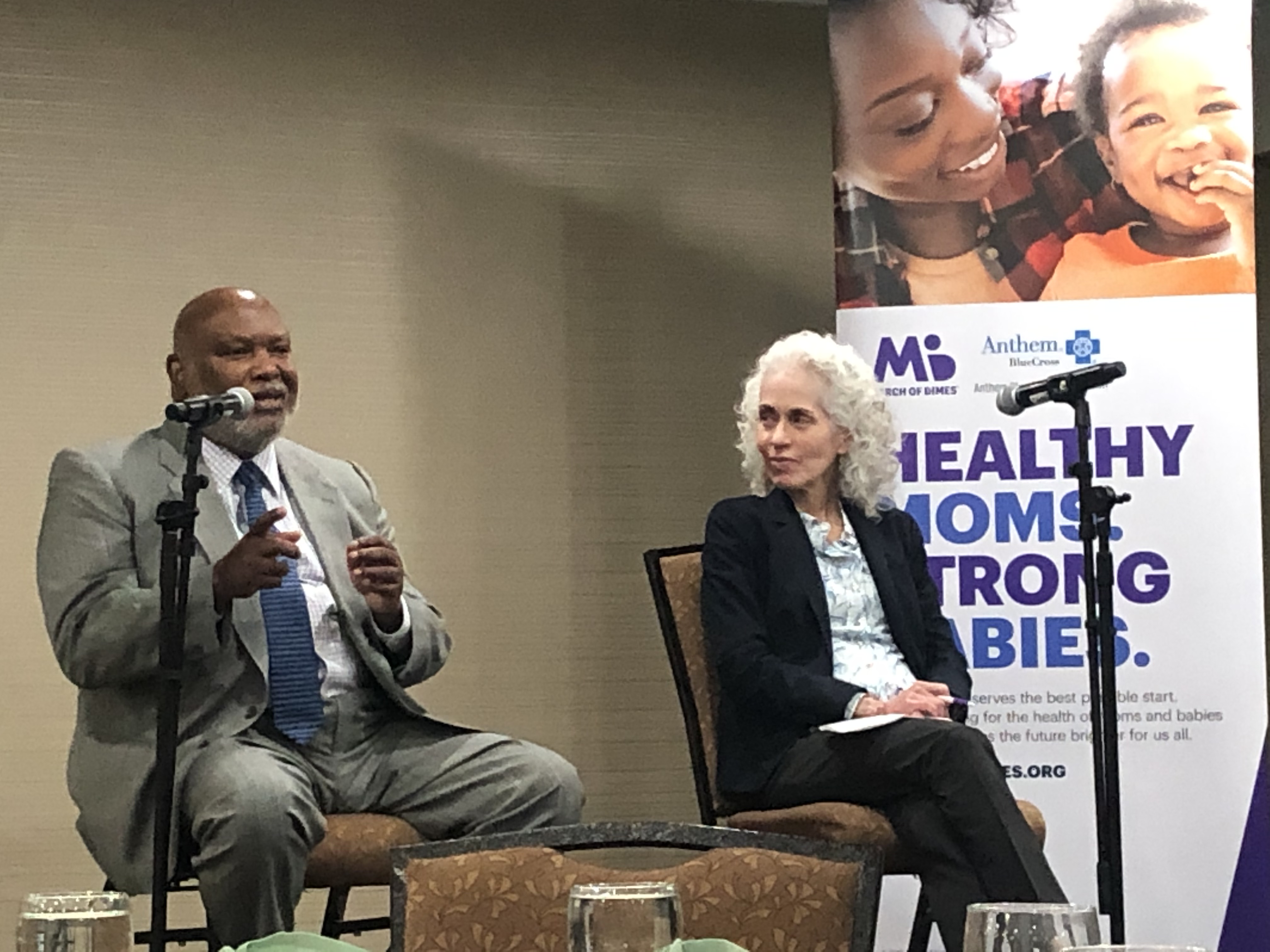 During his keynote speech, Arthur James, a practicing obstetrician and co-chair of the March of Dimes Health Equity Workgroup, highlighted that, at the current rate, black infants would have to wait until 2050 to have the same survival rates as those of white babies in 2017.

“What it means,” James told the audience, “is that people who look like me will have to wait a long time – decades – for our babies to have the same opportunity to survive as white babies."

First 5 LA is among those working with L.A. County DPH and other stakeholders to raise awareness about the link between racism and the poor birth outcomes for African American families. At the summit, First 5 LA Special Projects Manager Amelia Cobbs helmed a panel of experts who discussed several statewide projects working to close the racial birth equity gap, including a call to increase funding for the state’s Black Infant Health and evidence-based home visiting programs.

Later that day, at a breakout session, First 5 LA Program Officer Brandi Sims spoke to a packed room about how First 5 LA is creating community and family partnerships that support and empower black families. Project DULCE, for example, is an innovative pediatric-care-based intervention where clinical sites not only promote the healthy development of infants, but also address social determinants that have been known to lead to toxic stress and, thus, affect health outcomes. Another First 5 LA initiative, Best Start, represents First 5 LA’s investment in 14 L.A. regions that historically have faced disenfranchisement and oppression. By fostering strong collaborative efforts within a community, Best Start creates a space where parents, residents and organizations can join forces and become a catalyst for change.

At another breakout session, Franklin emphasized that the experience of pregnancy can be a harrowing one for many women.

"One of the things we found is that black women feel alone in their struggle,” she explained, “Even when they have support.”

To combat this issue, First 5 LA and L.A. County DPH have joined forces in a countywide initiative to foster a better understanding of the pathway shared by African American mothers. By telling their own narratives, mothers participating in the initiative are able to open up to each other, while also recognizing the true nature of their experiences. 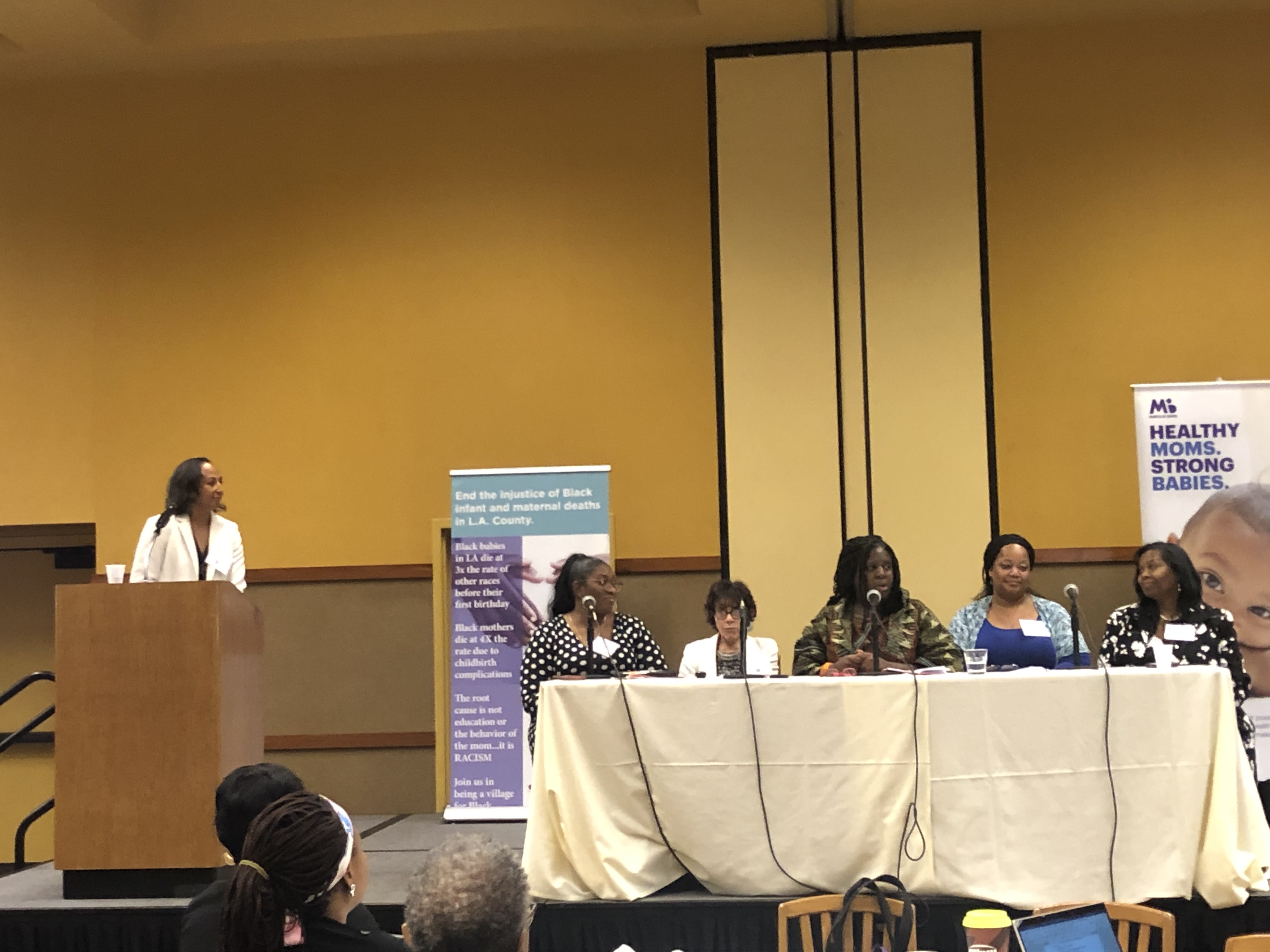 Franklin highlighted the importance of engaging in these "courageous conversations" that raise the issue of racism as a significant factor in the disparity in mortality rates. By sharing and amplifying this message, Franklin strives to help black mothers understand that these birth disparities are not the result of a personal shortcoming but rather are a failure of a system that must be fixed –– a message that was similarly echoed throughout the proceeding panel discussion.

“We have to tell the unvarnished truth about the descendants of the African slaves,” said panel member Adjoa Jones, a community mentor. “We can’t save babies without saving the ones who are having them. We’re very happy that the County is raising this issue.”

When asked what role those working in the early childhood field could play, Franklin recommended adopting a critical lens that examined the outcomes of their work by race and ethnicity.

"When people leave this space today, it's important that they feel activated and informed," she said. "We all need to create change, regardless if you're a provider, a community-based organization or a community member who lives next door to an expecting mother.”