Winter Viruses May Be Behind Sleep-Disordered Breathing Spike in Children 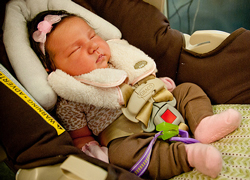 A good night’s sleep is important to our children’s development. But with the new school year under way, many children are at increased risk for sleep breathing disorders that can impair their mental and physical development and hurt their academic performance.

An earlier 2011 study showed that the frequency of sleep-disordered breathing increases in the winter and spring. Until now, researchers applied many theories to explain disorders that affect children’s breathing during sleep, focusing on causes or apparently related symptoms such as asthma, allergies and viral respiratory infections, like the flu.

But in a recent study at the Tel Aviv Sourasky Medical Center’s Pediatric Sleep Center, published in the journal Sleep Medicine, Dr. Riva Tauman and her fellow researchers of the Sackler Faculty of Medicine at Tel Aviv University have shown that asthma and allergies do not contribute to pediatric sleep-disordered breathing. Instead, they contend, viruses alone may be responsible for the seasonal variation in sleep disorder problems experienced by children.

Dr. Daniel Lesser, a pediatric pulmonologist at UC San Diego’s Rady Children’s Hospital, emphasizes that, “though the study was not specifically designed to answer the question of whether viruses affect sleep study results, it is a reasonable speculation.”

The researchers emphasize that the study has broad implications for the treatment of sleep-breathing disorders in children, bolstering the idea that the time of year is relevant when treating children for sleep-disordered breathing in borderline cases.

Lesser, whose career has focused on pediatric sleep medicine in Southern California, believes that the Tel Aviv study validates the need for further research. “It raises important questions as to why we see some seasonal variability (in sleep-disordered breathing).”

“We knew from research and clinical practice that sleep-disordered breathing in children gets worse during the colder months,” Dr. Tauman says. “What we didn’t expect is that the trend has nothing to do with asthma or allergies.”

“Sleep-disordered breathing” is a blanket term for a group of disorders. One of the common disorders is obstructive sleep apnea, in which the upper airway becomes blocked, usually by enlarged tonsils or adenoids, causing snoring and, in more severe cases, breathing pauses that lead to poor-quality and fragmented sleep, and decreased oxygen and elevated carbon dioxide levels in the bloodstream.

In their study, Dr. Tauman and her Sackler Faculty of Medicine colleagues Michal Greenfeld and Yakov Sivan statistically analyzed the cases of more than 2,000 children and adolescents who were referred to the sleep center to be tested for suspected sleep-disordered breathing between 2008 and 2010. Confirming earlier results of a 2011 study of 5- to 9-year-olds, the researchers found that pediatric sleep-disordered breathing is worse in the winter – November to March, by Israel’s definition – than in the summer. The seasonal variability is most apparent in children less than 5 years old, they found.

The researchers also found that wheezing and asthma do not contribute to the trend.

Based on their findings, the researchers speculate that viral respiratory infections – which are more prevalent in younger children and during colder months – are the major contributor to the seasonal variability seen in pediatric sleep-disordered breathing.