The Kids Are Alright: What We’re Reading 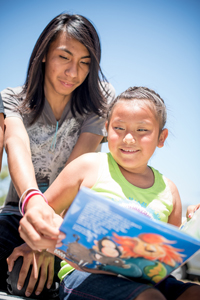 Here is the latest news, notes, research and other items of interest that we’re reading to inform our view of the issues affecting parents and children from the prenatal stage to age 5.

“The 2014–2015 school year has come and gone,” writes Ashley Mackin of the La Jolla Light, “but for La Jolla’s youngest students, this year was a special one. It was the first year every public elementary school in San Diego offered a Transitional Kindergarten class.”

Abbreviated as TK, the program is for children with their fifth birthday between September 2 and December 2. Previously, the cutoff date for entrance to kindergarten was a fifth birthday by December 2 — one of the latest in the country. This allowed for children as young as 4 years and 9 months to be in classes with students more than a year older, Mackin writes.

“Parenting more than one child is stressful, and until now, there have been few ways to help parents deal with their own distress when children squabble." - Laurie Kramer

When children participated in a program designed to reduce sibling conflict, both parents benefited from a lessening of hostilities on the home front, according to a recent University of Illinois study.

“Parenting more than one child is stressful, and until now, there have been few ways to help parents deal with their own distress when children squabble. Many parents, especially mothers, use how their kids are getting along as a barometer for how well they’re doing as a parent. This is true even though virtually all siblings have some conflict,” Laurie Kramer, a University of Illinois professor of applied family studies and co-author of the study, said in a press release.

The study compared parents of siblings in Kramer’s More Fun with Sisters and Brothers program with a control group composed of parents of non-participants. The More Fun with Brothers and Sisters program is a five-session intervention that teaches 4- to 8-year-olds a set of social and emotional competencies that are important for good sibling relationships. These skills include how to see a problem from a sibling’s perspective, how to identify and talk about a wide range of emotions, how to calm themselves when they’re experiencing intense feelings and how to manage conflicts.

After watching their children on a closed-circuit TV, parents received specific suggestions on what they could say to guide children to manage a conflict using the skills the children have learned. Researchers also sent the parents home with lesson-specific bedtime stories, a board game with cards and questions, an activity book, and a CD with a rap song that summarizes the skills the siblings learned.

Although both parents benefited from the program’s reduction in sibling squabbling, the study found that moms profited more than dads. Moms found that, like their kids, they were better able to manage their own emotions during stressful moments.

Senate President Pro Tem Kevin de León (D-Los Angeles) is championing unionization of the tens of thousands of home-based child care workers in California. After Gov. Jerry Brown failed to include unionization in his new budget measures, Democratic leaders are hoping to pass de León’s Senate Bill 548, which would unionize providers who use their homes to care for children in state-subsidized programs. The bill has the support of the group Raising California Together and the Service Employees International Union (SEIU).

According to this article by Sacramento Bee writer Andrew Holzman:

“The SEIU and its coalition, citing government reports, say pay for providers can be lower than $5 an hour.

“’These are women who are often paid below the minimum wage,’ de León said. ’I think you can improve their wages unquestionably, because they are so poorly paid.’

“According to the nonpartisan Legislative Analyst’s Office, the state budget signed last week will increase the reimbursement rate that dictates pay for some providers by 4.5 percent, at a cost to the state of $44 million. The SEIU and its coalition say that’s a start, though they still think more can be done.”

Opposition to the bill has already sprouted in Sacramento, Holzman writes:

“Republican lawmakers opposed to the unionization measure argued during a floor debate in the Senate that the state’s costs could rise considerably under unionization. They said the change also could result in higher child care costs for people who use the in-home care but don’t qualify for assistance.”

Stay tuned: De Leon is moving the bill to the Assembly.

Metal and the Factors

Growing up as a kid in a poor LA neighborhood in the 80’s, my rock band was my sanctuary and where I shared my dreams with my mates. I was considered an outcast, not just at school and the streets but also at home. You can imagine the cultural shock my immigrant parents had to deal with having a longhair as a son. It was not easy on both sides…

I share this with you because I came across an interesting article that highlights a study that finds that heavy metal fans (which I was but also loved Mexican traditional music, Willie Nelson and the blues) matured into responsible adults. That former metal fans “were significantly happier in their youth, and better adjusted currently.” Most interesting, the article touches on the protective factors and how social supports and the “metalhead identity” played a role in their positive development. Who would have thought? Metal and the Factors!