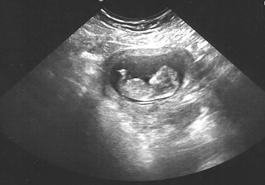 Seeing their babies’ ultrasound images for the first time is a powerful moment for expectant fathers that could hasten family bonding and provide an opportunity for promoting positive partnering and parenting, according to a new study.

Dr. Tova Walsh, a researcher at the University of Wisconsin School of Medicine and Public Health, says fathers’ feelings about ultrasound images have rarely been studied, and prior studies have looked at fathers in Europe or Australia.

Walsh and colleagues at the University of Michigan interviewed 22 expectant fathers in Michigan in 2010. The fathers ranged in age from 23 to 41 years with a mean age of 31 years. Sixteen were married to the mothers and half were expecting their first child. Researchers interviewed the fathers after they viewed a routine ultrasound that was administered at 16 to 20 weeks into the pregnancy.

They found that the ultrasound experience was an important moment for men, establishing the reality of the coming child and reassuring them that all was going well with the pregnancy.

It also caused the men to reflect on their roles in the life of mother and child, making it an important practical and psychological preparation for parenthood. The study noted that the men’s “plans and dreams alike extended beyond the immediate future of infancy and across the child’s lifespan.”

One man told the researchers: “Now that we know that it’s a girl, you know, now I’m thinking about … walking her down the aisle someday, you know, (I’m) thinking that far ahead … which is crazy, but I mean, it’s like my brain went from bringing her into the world and taking care of her and making sure she is taken care of (as) to her future and everything … “

Another had more immediate worries: “I need to make sure I have a steady job because my child eating depends on me. If I don’t work, he don’t eat. And I’d rather my child eat before I do.”

The researchers found that peer encouragement from other fathers was important in making them choose to be present for the ultrasound. They also learned that the ultrasound experience was as powerful for experienced fathers as for first time dads. Reactions ranged from quiet excitement to euphoria.

One man said: “My heart started beating faster just to hear a life – boom, boom, boom, boom, boom. It just felt like – the feeling’s indescribable, I was just blown away, like my eyes filled up but it’s like I won’t cry, I just be so happy to hear it … The heartbeat is like letting me know it’s on the way, get ready.”

Walsh is a Robert Wood Johnson Foundation Health & Society Scholar at the UW School of Medicine and Public Health. Her study, “Moving up the Magic Moment: Fathers’ Experience of Prenatal Ultrasound,” is being published in the Winter 2014 edition of the journal Fathering.