We’re thinking of getting our 16-month-old son a cardboard box for Christmas. Maybe we’ll throw in some of those Styrofoam peanuts for kicks.

Because, we wonder, if our toddler gets the same amount of enjoyment from a pile of ripped-up wrapping paper as he does from a train set, why bother spending the money?

Sadly, my wife had a different vision of Christmas morning. It included a softly-glowing, organically-grown Christmas tree, steaming mugs of warm eggnog, big red bows tied around our cats’ necks and our little guy, laughing merrily as he watches his Lionel train speed ‘round and ‘round the track.

The reality is a wee bit different. 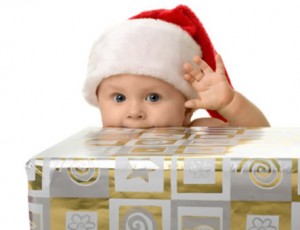 We’re driving up to my mother-in-law’s for Christmas, so we won’t be around to enjoy a tree, organic or otherwise. Eggnog makes you fat. The cats would rip our eyes out if we tried to tie anything around their necks. And the biggest hurdle? Louie doesn’t really seem to care. Given a choice between a toy and a pot lid, he goes for the lid every time.

And, like everyone, this year will be difficult when it comes to money for the little extras. But if we forgo gifts for our son, will he look back on the pictures from this Christmas and say to his gracefully-aging, yet still fabulous parents…“Where the heck are all my toys?”

So we’ve come up with a compromise. We’re going to get him things we would have to buy anyway — namely, clothes — plus one bigger gift that he can’t possibly ignore. After much deliberation, we settled on the Radio Flyer Little Red Roadster, a ride-on toy in an eye-catching, candy apple red that we hope will make his eyes light up come Christmas morning.

And we bought the Roadster used on eBay for a third of what it costs retail. It might have scratches or a dent, but I doubt the little guy will notice.

Additionally, we’re going to stuff a stocking with a bunch of things we pick up from thrift stores and garage sales. Those gifts are not only affordable, but Louie really seems to enjoy pulling things out of containers and putting them back in.

For example, one of his favorite activities is emptying the entire contents of our recycling bag … every day … onto the floor. Merry Christmas, indeed.