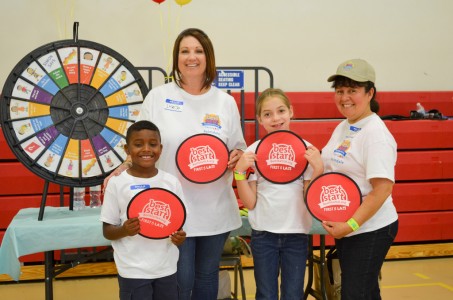 Two-year-old Eric is a very shy little boy. Sometimes, when he rides on the back of his mother’s bike, he waves to others. But most of his time is spent alone with his grandmother while his mother works at In-N-Out Burger.

“It’s hard because he’s home alone,” said grandmother Alicia Gomez of Palmdale. “He doesn’t have anyone else the same age to play with.”

On a recent Saturday, Eric got a chance to socialize with other kids his own age – tossing around a bright red ball and rolling on a gymnastics mat at Best Start Palmdale’s Get Up Get Fit event. 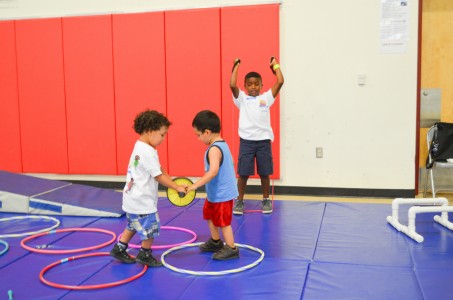 “Here he gets to interact with other children,” Gomez smiled as she watched Eric play inside the auditorium at the Palmdale Learning Plaza. “They teach him how to roll and jump. It breaks the shyness.”

Socialization is an important developmental step for children to become ready for kindergarten, which is a goal of First 5 LA. Another goal is that children maintain a healthy weight. The Get Up Get Fit event provided an array of ways for children to move their bodies, from jumping rope to hula hooping, dancing to gymnastics. 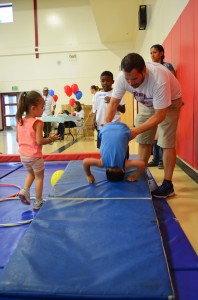 “Gymnastics reinforces all those synapses in a child’s brain that help promote their spatial awareness,” said Daniel Fuentes of Genesis Gymnastics in Lancaster, who taught toddlers how to take a tumble. “Plus, they say that an hour of physical fitness a day is key to preventing childhood obesity.”

It was especially important to kick off the summer with an event that taught children and parents the significance of having a healthy, activity-filled summer. More than 200 parents and children attended, even though the thermometer hit 111 degrees outdoors.

“What better time to do this than when kids first get out of school and families are deciding what to do on a Saturday?” said Best Start Program Officer William Rowel. “This reminds people how important it is to get out and get fit.” 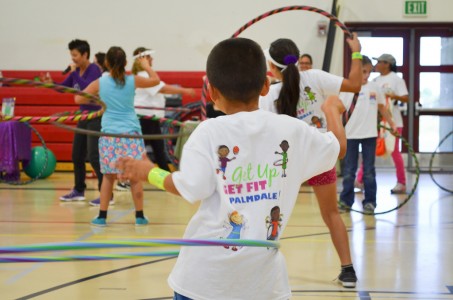 “Lately the statistics show that this community is one of the most sedentary,” Torres said. “So we have a lot of overweight parents and children.”

“My son gobbles up a hamburger but has trouble eating healthy food,” Jose Pulgarin said of his 2-year-old boy, Timothy, who was clutching a celery stick. “But he’s been eating healthy since he got here.”

Perhaps Best Start member Pastor Gary Moorehead of Palmdale said it best as he sat down with a big plate of celery: “You have to practice what you preach.”