No More Tummy Troubles: One Benefit to Rethinking Your Drink (And A Giveaway, Too!)

When my older son started kindergarten, I had the daily task of making his lunch. Up until then, lunch and snacks were provided by his daycare, and then his preschool. For the most part, both served milk or 100 percent fruit juice with lunch … with the occasional fruit punch or other sugary drink occasionally snuck in.

Because I wanted to give him a “treat” that wasn’t expensive and was easy to pack in his lunchbox, I started giving him fruit juice every day. I tried to find the boxes or pouches with the least sugar possible, but there was always at least five teaspoons of the sweet stuff.

Several months later, he began complaining of tummy pains a couple nights a week. We tried to figure out what was causing it, but never could. We took him to his pediatrician, who examined him and found him to be physically fine. We started to think that maybe it was all in his head. At the time, we were having a lot of behavioral problems with his younger brother, and I know that their dad and I were plenty stressed. We figured maybe he was picking up on that. 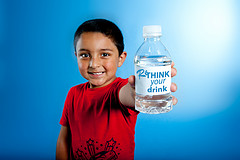 The stomach pains, though, didn’t stop, even as his brother’s behavior (and our frustration) improved. At his next yearly check-up, we told his new pediatrician about his tummy troubles, and we had a long talk about his diet and toilet habits. Her face didn’t look too pleased when I told her he got a juice with his lunch every day. She said, based on what we told her, it sounded like he was constipated. She explained that being constipated doesn’t just mean he doesn’t go potty every day, but can also mean that the quality of his poop is being affected (“logs” are better and mean he’s getting enough water, “golf balls” are not good and mean not enough water, she added).

After that, I started putting small water bottles in his lunch, and packing a refillable, metal water bottle in his backpack, too. Turns out, water is easier and cheaper than the juice boxes and pouches. And he can fill up his bottles during the day from the drinking fountains at school.

The results were fast. His complaints about tummy aches stopped. He learned to monitor his potty habits and add more water when he sees “golf balls,” too.

Now, he’ll occasionally complain in the evening about his stomach hurting. I say, “Let’s think back to what you ate and drank today.” Chances are, there was always a juice, lemonade or sports drink “treat” earlier that day. It was an uncomfortable and painful lesson, but he now knows that water is best.