In an attempt to address the significant problem of childhood obesity in the United States territory, Puerto Rican officials have proposed a $500 – $800 fine for parents whose children are obese and have not improved after parent-focused education.

According to a press release from The Obesity Society (TOS), Puerto Rican legislators supporting the bill under debate say it is intended to improve children’s health by encouraging parents to make healthier choices for their families. While some public and pediatric health organizations have called the bill “unfair,” The Obesity Society and The Obesity Action Coalition (OAC) go further to call it a misguided policy that ignores the core scientific understanding of obesity as a disease.

“Obesity is a disease, not a choice made by parents or their children,” said Nikhil Dhurandhar, TOS president and chair of the Nutritional Sciences department at Texas Tech University. “A complex combination of biological and environmental factors contributes to determining the body weight of an individual. Further, many known and unknown biological factors, in addition to personal nutrition and physical activity decisions, may interfere with weight loss, reinforcing the fact that we can’t treat obesity solely by placing the blame on parents, or individuals.”

TOS and OAC are joined by many other leading science-based organizations in recognizing obesity as a disease, including the National Institutes of Health (1998), the Social Security Administration (1999), the Centers for Medicare and Medicaid Services (2004) and the American Association for Clinical Endocrinology (2012). Research shows that obesity is a far more complex disease and its treatment requires much more than willpower or eating less and exercising more. In most cases, obesity is chronic and challenging to treat.

The societies ask Puerto Rican legislators to consider whether they would impose fines against parents whose children had other diseases such as diabetes, asthma or cancer.

“We appeal to policymakers to treat parents of children with obesity with the same respect they would afford parents of children with other diseases – with compassion, support and incentives for improvement, rather than penalties,” said Jose Fernandez, TOS fellow from Puerto Rico and professor of nutrition science at the University of Alabama at Birmingham. “The political efforts in Puerto Rico should consider a focus on incentives, such as those to buy healthier foods, and improved education and access to professional support services that can help parents better understand obesity and take steps to improve their children’s nutritional health and weight.”

Research shows that there can be a number of unintended consequences associated with obesity-targeted health policies and suggests that blaming individuals has the potential to downplay other policy initiatives that could truly impact the obesity crisis worldwide. TOS and OAC say the solution lies in better understanding obesity prevention and treatment, which includes more research, and better access to and development of effective treatment options. 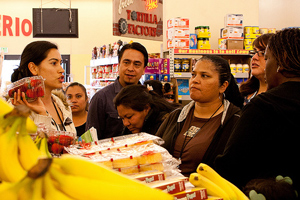 Placing full-service supermarkets within neighborhoods considered to be “food deserts” may not result in healthier diets for children or reductions in childhood obesity – at least in the short term, according to a new study.

Researchers at New York University’s Langone Medical Center compared two neighborhoods in the Bronx: Morrisania, where a new, government-supported, full-service supermarket was placed, and Highbridge, where no new market was built.

Caregivers of young children 3 to 10 years old and living in those neighborhoods were surveyed. Shopping and consumption information was collected from them prior to the opening of the market, five weeks after it opened, and again one year after the store opened.

The researchers analyzed 2,172 surveys and additional material from a sample of predominantly low-income minorities. They found that while there were small, inconsistent changes in diet over the time periods, there were no appreciable differences in availability of healthful or unhealthful foods at home or in children’s dietary intake as a result of the presence of the supermarket.

This is the first controlled study (including a comparison group) to evaluate the impact of a government-subsidized supermarket on food consumption for children.

Authors of the study, which appeared in the February 26 online edition of the journal Public Health Nutrition, point out that further research is needed to determine whether healthy food retail expansion can improve food choices of children and their families. This includes where best to place these stores, under what circumstances they will be successful, and with what other policies or programs they should be coupled.