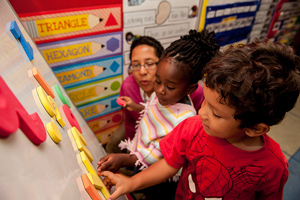 Despite improvements over recent years, our nation continues to fall short in offering families affordable, quality preschool programs to improve a child’s future school success, according to a new report released this month by the U.S. Department of Education.

First 5 LA Program Officer Young-Ji Lee says the new report mirrors earlier findings by the organization, which shows “there is differential access to Early Care and Education services across the county, and access differs considerably by socioeconomic circumstances.”

“LAUP and First 5 LA believe that in order to ensure accessible, quality early learning and preschool for all of California’s 3 million children, ages 0-5, broad public policy, advocacy and public funding support are critical and, indeed, the only strategic, permanent option.” – Young-Ji Lee

The report highlighted the need for an Elementary and Secondary Education Act (ESEA), which would expand access to high-quality early learning opportunities and makes preschool through 12th grade the law, rather than K-12.

U.S. Secretary of Education Arne Duncan said that although key investments have been made, much more needs to be done.

“Students have made enormous progress in recent years, thanks to the hard work of educators, families and the students themselves, but we have so much farther to go, and making high-quality preschool available to all families who want it must be part of that,” Duncan said. “Expanding access to high-quality preschool within the reauthorization of ESEA will narrow achievement gaps and reflect the real, scientific understanding that learning begins long before a child enters kindergarten.”

Locally, First 5 LA and Los Angeles Universal Preschool (LAUP) have worked over the last 10 years to provide more than 100,000 young children in Los Angeles County with quality preschool in order to improve school readiness outcomes. In 2004, LAUP was created and received a $580 million grant from First 5 LA to fund the effort. The grant, which expires in June 2016, assists LAUP in currently supporting approximately 10,700 preschool spaces a year.

“LAUP and First 5 LA believe that in order to ensure accessible, quality early learning and preschool for all of California’s 3 million children, ages 0-5, broad public policy, advocacy and public funding support are critical and, indeed, the only strategic, permanent option,” said Lee.

In addition to the shortage of accessible programs, the report also highlighted the lack of Latino children attending preschool. As stated, Latinos demonstrate the lowest preschool participation rates of any major ethnicity or race.

“There may be private programs available to these families, but it all comes down to a financial decision – do they pay their mortgages, feed and clothe their children, or do they pay for a private preschool program?” said LAUP’s Senior Vice President of Programs, Dawn A. Kurtz. “LAUP serves 68 percent of Hispanic children in L.A. County, and serving this population is key to all of our future success.”

“Our focus at the state level is to work with our early learning advocacy partners to restore the infant and toddler, as well as preschool, slots lost during the recession to increase reimbursement rates so that providers can afford to stay open, and to insist on high-quality programming so that children are prepared for school,” Charnofsky said.