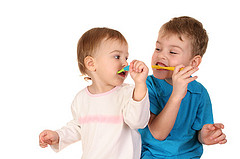 Contradicting information regarding whether to brush infants’ and toddlers’ teeth with fluoride toothpaste can be very confusing for a parent. While some organizations and dentists recommend waiting until a child is 2 before using fluoridated toothpaste, others advise parents to either consult their dentist or brush their children’s teeth with fluoride.

Dr. Paul Reggiardo, a Huntington Beach dentist and the national spokesman for the American Academy of Pediatric Dentistry, said the conflicting advice stems from the risk of fluorosis. The condition occurs when a child gets too much fluoride during the early years of tooth development, and causes tiny white specks or streaks on teeth enamel.

As water agencies and cities began adding fluoride to the public water supply, there was growing concern that children younger than 2 were ingesting too much fluoride and increasing their risks for fluorosis, Reggiardo said. It’s not just the water, he said, adding that food and infant formula prepared with the fluoridated water is also to be considered.

Reggiardo said it’s best for parents to talk to their child’s dentist about his or her water-drinking habits, as well as where the family lives, where the child spends his or her days and if the family purchases bottled water for drinking and preparing food – and which kind.

Reggiardo also said that a child’s risk for developing dental decay will also be weighed by the dentist in determining whether to recommend fluoridated toothpaste. For example, a child who is at high risk may have family members with unhealthy teeth and gums, or the child may be put to bed with a bottle of grape juice. Different children with different risks require different dental care strategies, Reggiardo said. “You start looking at these factors, and then you make a decision that the risk of a mild fluorosis is much less concern than the risk of dental decay,” he said.

Generally, the AAPD recommends a “smear” of fluoridated toothpaste for children younger than 2, while a child 2 to 5 should have a “pea-sized” dollop on their toothbrushes, Reggiardo said. He compares the amount of fluoride a child needs to doses of medicine, which is why the AAPD encourages parents to take their children to the dentist before age 1.

New U.S. Dietary Guidelines for Infants and Children: Skip the Sugar Sugar is not so sweet for babies’ and childrens’ health, according to new dietary guidelines for Americans from the U.S. Department of Agriculture. In fact, the report recommends babies have no added...