Moving Toward Reversing the Harmful Effects of Abuse on Young Minds 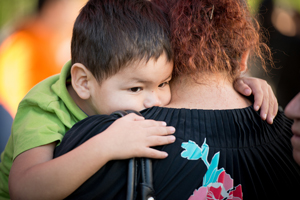 In the words of a Gaelic proverb: It is not easy to straighten in the oak the crook that grew in the sapling.

Neuroscience is revealing that we would do well to give our youngest – the sapling human, so to speak – greater attention in mental health care than we do today: that the benefit while their brains are the most “flexible” would be profound in the long run.

The seminar, sponsored by The Whole Child and First 5 LA, revealed emerging clinical and research findings on the effects of adverse childhood experiences (ACE’s), identifying the often mixed signals and symptoms of children’s reactions to abuse, and positing new strategies for care and policy.

“Though we are inherently all about human connection – physically, mentally, and socially – our development as a species has taken us away from human connection. The human brain is not designed for the modern world.” – Bruce D. Perry

Bruce D. Perry, Senior Fellow of the ChildTrauma Academy in Houston, Texas, provided not only an education but a wealth of practicable recommendations for his audience at the seminar.

“The brain,” Perry explained, “is an incredibly complex organ with 84 billion neurons and 420 trillion synaptic connections – each one designed to be changeable, and all in a state of continuously dynamic activity.”

He described this state as neuroplasticity, and that understanding it can and should influence treatment protocols.

“We need to recognize the complexity of the individual and the fact that we are part of a collective of human beings,” Perry stated.

The potential impact to therapy, he explained, is twofold: First, that nearly any attempt to clumping children into a labeled diagnosis, or any of the five or so primary diagnoses typically given to children, such as ADHD, is inevitably an oversimplification that can result in a failed treatment plan.

“Second, understanding the child requires that you look not only at them as an individual but the macro-level context of its community, as the child’s environment profoundly influences causes and treatment, or should,” Dr. Perry stated. “For this reason, it is important to not make policy affecting all kids based on clumps.”

Perry pointed out that the average child drops out of mental health clinical care after just three visits. He expressed that this could change “if we try to understand the complexity of the individual child” and modify treatment accordingly.

Another issue affecting children is the decline in human connection in the modern world, Perry said. For millennia, sociological evolution – such as learning language, childrearing practices, and family structure – has allowed us to advance as a species by passing information and knowledge from generation to generation.

“But we have accidentally developed ourselves away from each other,” he explained. “Though we are inherently all about human connection – physically, mentally, and socially – our development as a species has taken us away from human connection. The human brain is not designed for the modern world.”

According to Nielsen Solutions, the typical American today spends 11 hours a day on digital devices, rather than face-to-face contact. So while humanity as a species has become more affluent, Perry said that today “we have a poverty of relationships.”

Perry considers this a critical issue of mental health because, in working with children, “…we have seen that relational poverty made the mental response to adverse child experiences worse – that relational health tells us more about buffering, recovery, and long-term effects than does the adversity exposure. Relationships matter. Person-to-person interaction is therapeutic. The more and better your interrelational exposure, the better your response to stress and adversity.”

Neuroscience research also brings into question some long-held assumptions about how we “dose out” therapy – typically one 50-minute session per week, 20 sessions total. Perry questions whether this dosage is a biologically relevant dose or schedule.

“Based on Dr. Perry’s research, I do wonder if we could apply a different, more effective visitation pattern with the kids we serve, such as three 15-minute sessions a week, instead of a single long session,” said conference attendee Antoinette Babers of Valley Star, an organization working with foster kids.

“Today’s sessions have given me much information that I look forward to sharing with parents I serve,” Sanchez said. “I meet many moms who believe that too much responsiveness to their baby’s crying will spoil them, which, as Dr. Perry points out, is the only way an infant can express any physical or emotional need.”