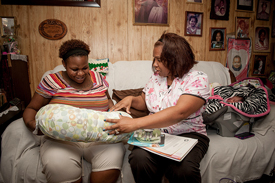 Every year, nearly 300,000 women die during pregnancy, childbirth, or soon thereafter. Around 2.9 million infants die in the first month of life. Millions more suffer long-term health, financial and emotional problems due to inadequate pregnancy health care. Could midwifery make a positive difference in these statistics?

A recent series asserts that it can – that midwifery can play a crucial part in saving the lives of millions of women and children who die during and around the time of pregnancy.

The internationally-produced series from the weekly health journal The Lancet delivers an in-depth examination of midwives – trained childbirth, postpartum, and well-woman health care specialists – and midwifery, demonstrating the positive benefits to women and their babies that high-quality midwifery can provide.

The most modest estimates suggest that the current rate of maternal deaths could be halved by 2030.

“The Lancet series is incredibly relevant to midwives in all settings in all countries,” said Ginger Breedlove, president of the American College of Nurse-Midwives, or ACNM. “The series goes beyond illustrating how midwives save lives to showing how integration of high-quality midwives into the health care system improves quality of care and the long-term health and well-being of women.”

According to series co-author Professor Mary Renfrew of the School of Nursing and Midwifery at Dundee University, Scotland: “Many of the needs of childbearing women, their babies, and families across the world are still not being met, despite long-standing recognition that women and their babies need access to health care which provides more than just emergency interventions for acute medical problems. Although midwifery is already widely acknowledged as making a vital and cost-effective contribution to high-quality maternal and newborn care in many countries, its potential social, economic and health benefits are far from being realized on a global scale.”

The series reports that the number of stillbirths and maternal and newborn deaths could be reduced by more than 75 percent if effective midwifery was available to all women in the countries with the highest burden of infant and maternal deaths. Their most modest estimates suggest that the current rate of maternal deaths could be halved by 2030 if coverage of midwifery services increased by just 25 percent.

The return on investment from the education and deployment of community-based midwives is thought to be similar to vaccination in terms of the cost per life saved. However, according to the series authors, the scale of the potential effect that increasing access to effective midwifery could have is yet to receive adequate international recognition.

“Together, with the 2014 State of The World's Midwifery Report, the research findings show that midwifery care links normalization of childbirth in health systems and collegial, inter-professional collaboration with impressive outcomes,” Breedlove added. “The series confirms that midwifery care leads to significant improvements in health, quality, safety and costs related to childbearing women. ACNM looks forward to a full review of the comprehensive recommendations presented.”

Learn more about midwifery in the U.S. at American College of Nurse-Midwives.