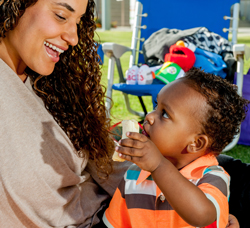 Education and awareness campaigns aimed at stemming the rise of childhood obesity may finally be working, according to a new report showing American kids are consuming fewer calories than they did a decade ago.

The Centers for Disease Control and Prevention reports that between 1999 and 2010, boys’ daily calorie consumption declined from 2,258 calories to about 2,100 calories, while girls reduced their intake from 1,831 to 1,755 calories.

The February report also found that during this time period, most children between the ages of 2 and 19 ate more protein-rich foods such as meat, beans and nuts, and less carbohydrates, including bread and pasta, which, in excess, can lead to unhealthy weight gain. The percentage of calories from fat remained unchanged at 11 to 12 percent, above the recommended 10 percent.

The findings, based on data from the National Health and Nutrition Examination Survey, are an encouraging sign that increased awareness of the negative effects of sugary drinks, and public education campaigns on healthier diets, are making a difference in the fight against childhood obesity.

“This shows that the message is getting out — not only about what foods children should be eating but how much,” says Jessica Monge Coria, program officer, community investments at First 5 LA. “It’s a step in the right direction.”

First 5 LA funds a number of programs aimed at helping children maintain a healthy weight. One way to help ensure children cut their calorie consumption is by giving them access to healthy food. Last fall, First 5 LA worked with its partners to open a community garden in Koreatown featuring 30 plots for families with young children to grow fruits and vegetables. Another First 5 LA funded community garden is underway in south Los Angeles. In addition to growing their own food, families receive information on preparing nutritious meals and making healthy food choices.

In addition to increasing access to fruits and vegetables, First 5 LA has launched a number of public awareness campaigns, including “Rethink Your Drink,” aimed at replacing sugary drinks with water to fight childhood obesity.