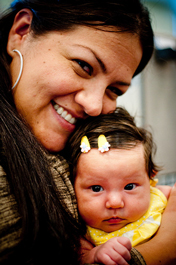 “KC is now considered an essential therapy to promote growth and development of premature infants and their brain development,” Ludington-Hoe reported.

But while KC’s benefits are known, its use is not widely promoted by hospitals, she said.

Ludington-Hoe encourages hospitals to incorporate KC-type features by modifying neonatal intensive care units to make them calming places, positioning babies to promote physical and motor development, decreasing how much babies are handled to reduce their stress, improving wake-sleep cycles and promoting a newborn’s ability to stabilize important functions, like its heartbeat and to synchronize physiologic functions with his mother’s for optimal development.

Throughout Scandinavia and the Netherlands, KC is widely practiced, said the researcher. They practice 24/7 Kangaroo Care because mothers are told that they have to be their baby’s place of care, and they make arrangements for someone else to watch children at home so that the infant is always in maternal or paternal KC while hospitalized. It continues at home where mothers wear wraps that securely contain the infant on her chest to prevent falling.

Ludington-Hoe reported that this approach is standard care in Scandinavia and Germany, where many preemies leave the hospital about three weeks earlier than in the United States. Also, KC is used in those countries after normal births and continues for three full months.

In previous research, benefits of KC have extended from childbirth to age 16, showing improved cognitive and motor development in newborns that received KC during hospitalization.

Among the researcher’s findings: Babies respond more positively to their mothers than nurses and experience less pain and stress when receiving some medical procedures while in their mothers’ arms. Infant’s brains also mature faster and have better connectivity if they have received KC versus not having received KC.

Preemies held by their mothers in a prone position for an extended time tend to sleep better, which aids brain development. Infants adjust their heartbeats and body temperatures to their mother’s and absorb immune benefits from their mother’s skin, the researcher found.