Hopscotch and Its Worldwide Attraction 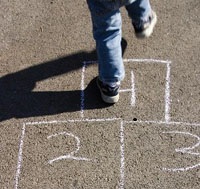 Children’s games may seem like they’re all about having fun, but they’re also important in a child’s development. Playing games such as hopscotch and hide-and-seek help kids develop their gross motor skills, such as running, jumping and hopping, while also teaching them how to wait their turn and follow directions. These popular games also promote exercise, which is key to keeping kids fit and healthy.

It is one of the most popular children’s games around the world. In Cuba, it’s called pon. Italians call the game campana or mondo. In Malaysia, it’s known as tengteng, and in the Netherlands, natives call it hinkelen. Here in the United States, we call it hopscotch.

The game, which involves a marker, such as a rock or coin, and a series of nine drawn squares on a sidewalk or playground, has been around since the late 17th century. The English reportedly invented it as a training course for soldiers to improve their footwork and named it hopscotch since one hopped over a “scotch,” or score, leading many to believe that sticks were used to outline the shape of the hopscotch course on soil.

Hopscotch eventually became a children’s game and today, it remains well-liked for its simplicity: the game can be played with one or more players, practically any small item can serve as a marker, a hopscotch course can be drawn with chalk or etched in dirt just about anywhere, it doesn’t require athleticism or special skills, and children as young as 3 years of age can participate.

The game not only offers young boys and girls healthy exercise and lessons in taking turns, but also helps them develop their motor and counting skills and improve balance and coordination, according to child development experts.

Children are not the only ones who benefit from playing hopscotch. Physical therapists and exercise physiologists say hopscotch is ideal for everyone for balance and gluteal strength and can improve overall lower extremity mobility due to the forward-back, sideways, and rotational moves in hopscotch.

A study published in the European Journal of Sports Physiology found that hopscotch and other cross-training activities improved the performance of long-distance runners. Researchers found that hopscotch, which produces a range of movement, increases the flexibility of lower leg muscles.

It’s no surprise that hopscotch has become a beloved game that children and adults of all ages can play and enjoy.